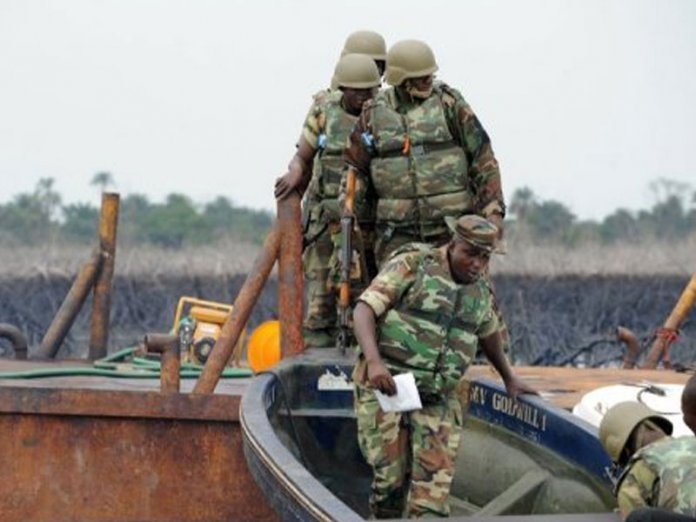 Operatives of the Inspector General of Police Special Task Force on Pipeline Vandalism attached to the PPMC depot in Warri, Delta State, have arrested nine persons in connection with illegal bunkering activities during the raid on two notorious locations within its coverage areas.

The locations comprising Oteghele and Ugbodede communities, both in Warri South Local Government Area, have been known to be harbouring large expanse of illegal oil bunkering activities, especially, the locally-refined AGO, otherwise known as diesel.

Also destroyed at both locations were over 50 illegal refineries which had refined about 15,000 litres of diesel about to be loaded into wooden boats to be delivered to potential buyers.

Briefing newsmen on the arrest in Warri, the Commander, IGP Special Task Force, Anti- Pipeline Vandalism on Petroleum and Illegal Bunkering, SP Mohammed El-Yakubu, said the arrest was made possible based on the intelligence gathering efforts of his officers and men.

He noted that the command decided to invade the locations on Thursday, April 25, 2019, after it had been established that it was one of the busiest days in both camps.

He disclosed that while the Ugbodede community camp harbours 13 illegal refineries, the Oteghele community end controls the largest with about 37 refineries operating at full capacity in the area.

The commander who disclosed that nine suspects arrested were still be detained for further interrogations, said they would soon be charged to court for prosecution after investigation had been concluded, while the seized product would be handed over to the appropriate agency.

According to him, “this breakthrough was made possible through the cooperation of some good citizens who provided the information that led to the arrests.

“I want to sincerely thank these people and urged the members of the public, particularly those resident in the places where these criminals acts were being perpetrated to feel free to come and give us useful information that could lead to more arrest of these criminals.”

Yakubu, also admonished those behind this dastardly acts to begin to have a change of mind about the illegal oil business as the task force was more than ever determined to come after them.

“The culprits should desist from these act because beside the renewed efforts of my men and officers to rid the area of the criminal act, the business itself is very dangerous as the environment they are exposed in these camps on daily basis is injurious to their health”, he said.