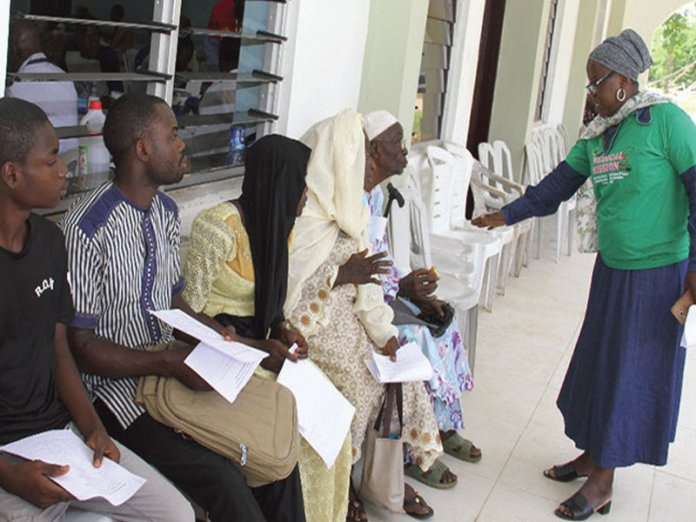 As part of concerted efforts to give back to their Alma Mater; members of the Obafemi Awolowo Muslim Graduates Association in partnership with the National Council of Nigerian Muslim Organisations USA, recently concluded a five-day medical

For those with good health and sight, understanding what it feels like to live with an impaired vision, or inability to move around at will, is like asking a food vendor if she is hungry because they can never relate to what the sufferer goes through.

Like the biblical woman with the issue of blood who had to defile all stumbling blocks to touch the helm of the garment of Jesus for healing, downtrodden Oderinde Kafilat; one of the 45 beneficiaries of the free cataract surgeries provided by the Obafemi Awolowo Muslim Graduates Association and the National Council of Nigeria Muslim Organisation (NCNMO) USA, decided to defy her denigrative in-laws, the scorching sun, and other obstacles to arrive at the venue for the free medical outreach with the help of her 10-year-old son, Mutiu.

Although she had to wait for about 400 others ahead of her to be attended to, she was filled with hope that she wouldn’t return home the way she left, and eventually, she got a testimony to share to the world at the end.

Kafilat narrated to THISDAY, how she endured the pains on her eyes for over six years till it was finally operated on.
According to her, “I woke up from sleep about six years ago and I started feeling pains in my eyes. I have tried every local means possible to relieve myself without knowing I was further injuring myself. I applied traditional means because when I went to the hospital, the amount they called for the treatment was too outrageous and we couldn’t afford it. Few of my husband’s family members started tagging me a witch because of the circumstances surrounding how the eye problem occurred. Saying, only witches wake up from sleep and develop eye problems out of their sojourn in the spirit world.”

“But I thank God that it is all behind now. I did the operation yesterday and the pain has stopped and I can feel my eyes. I would be going back to the clinic in two days time for post operation checkup. And I can’t wait to tell those that had laughed at me before that I am fine and that I am not a witch,” an elated Khafilat said.

In the case of Mr. Gabriel Christopher, he first thought the medical outreach was too good to be true even though he hoped it was. You wouldn’t blame Gabriel for his initial resolution if you consider the cost of a cataract surgery which is between N30,000 to N50,000 in a reputable hospital.

Of course, this excludes few consumables needed after the operation, and charges for bed space if required.
According to Gabriel, “I was diagnosed of cataract two years ago, but based on financial incapability, I wasn’t able to operate it. But I thank the organisers here. They have really helped me in a lot of ways. Sight is life. If you can’t see, you are as good as not living. My sight has been operated on, and I am very grateful to UNIFEMGA and the NCNMO,” he said.

Another beneficiary, one Saidat Ibrahim said, “I never knew I was hypertensive and my blood pressure wasn’t reading normal till I came for checkup. They have been able to place me on some supplements to normalise my blood pressure and also my heart condition. They also educated me on its management.”

Giving Back
For UNIFEMGA members, giving back is the best way to show appreciation to the school which made them. Years in the University of lfe they said was the best days of their lives. It was days of making friends, learning and embracing life with a passion. They gained so much more than just an education from their lecturers, so it is natural they try to give as much back as they can. Either in donations or volunteerism.

In his welcome address, Board of Trustees Chairman, UNIFEMGA, Alhaji Rafiu Ebiti, said the five days medical outreach which begun April 13 to April 16, was an offshoot of the collaboration between the NCNMO and UNIFEMGA during 2018 reunion of UNIFEMGA in Ile-Ife.
According to him, “the partnership is centred on three areas of common interest which include health, family matters and education. I am happy that about a year after that decision, it has become a reality.”
Speaking with THISDAY, NCNMO Medical Team Lead, Dr. Fatai Ilupeju, explained that the turn out from the mission was amazing, adding that they have so far, successfully carried out 45 cataract surgeries.

Commendation
The Vice Chancellor, OAU, Prof. Eyitope Ogunbodede, lauded the joint effort of UNIFEMGA and NCNMO.
He said: “This is a laudable effort we would always be a part of as an Institution. UNIFEMGA, NCNMO and other alumni have at several times taken up and completed laudable projects for the school without any external funding or support; but within themselves, they took care of it.

Working Partnership
Also speaking, National President, UNIFEMGA, Abdulwaheed Odeyimka said, “This medical mission is an offshoot from the last UNIFEMGA conference held here. It’s a joint effort between us and NCNMO, USA. Health is a very critical aspect of living. In fact as you know, health is wealth but not everybody can afford this. Because it is not cheap and the poverty rate in the country is on the high.

“The programme started on March 30 with free eye screening for over 220 patients in preparation for 45 cataract surgeries which we have successfully conducted within the periods as stipulated for the medical mission. We are in collaboration with five team members of NCNMO, as led by Dr Ilupeju; an anesthesiologist in Westwood, Massachusetts affiliated with Boston Medical Centre.

“They worked alongside UNIFEMGA team, as led by Prof. Akeem O. Lasisi, Consultant Otolaryngologist at the University College Hospital, Ibadan and Chief Medical Director, LAUTECH Teaching Hospital, Osogbo, and other volunteers to provide free medical services to people in Ile- Ife and its environs. And we are grateful to Allah for making this mission a very successful one,” he said.
A member of the NCNMO USA five-man delegate, Ms. Medina Ope expressed her passion for humanity. According to her, “From the outcome of this event, it is important to hint that there cant be enough of these kind of gestures. We all need to come together and give a helping hand. Even with the little resources at our disposal, a lot can be done to help out. I am glad to have been a part of this and I would definitely want to continue being a part of this because this is the whole essence of humanity; helping the less privilege in the society”.

Chief Medical Director, Lautech Teaching Hospital, and Head of Medical Mission Team, Prof Akeem Lasisi said, “all those checked upon and confirmed to be having treatable medical challenges within the ranges as planned for, have been well treated and taken care of, while we have referred those outside the range to trusted specialist hospitals.

“We have also made necessary provisions and fully paid for further checkups on those we treated after the period of the medical outreach elapses. All they only need to do is make themselves available to the designated medical centers in the school that they have been assigned to.”