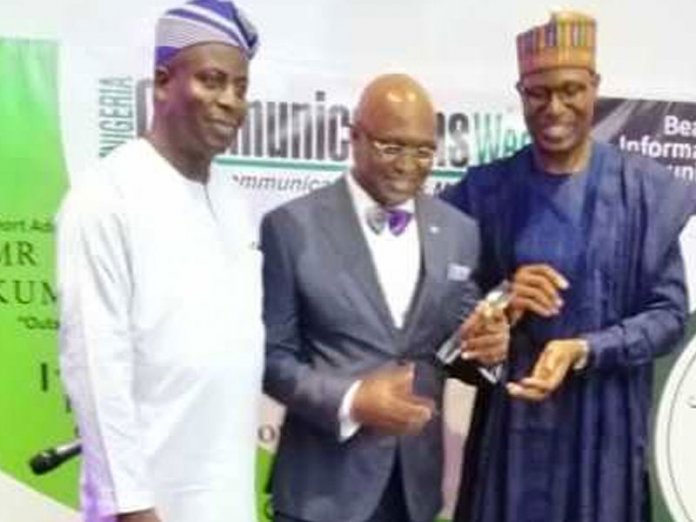 The Becon of ICT (BOICT) Merit Award 2019 edition ended on an impressive note with the crowning of Dr. Jerry Agbaike, a distinguished Permanent Secretary in the service of Delta State government under the watch of Governor Senator Ifeayin Okowa as the e-Government Personality of the year 2019, hosted recently by CommunicationsWeek Media at the Eko Hotel, Lagos.

In his response after receiving the award, Agbaike said: I am deeply honoured and profoundly grateful to the Board and management of CommunicationsWeek Media for the privilege of bestowing on me, the 2019 prestigious award of “E-Government Personality of the Year in the Public Sector” in recognition of my innovative contributions to e-government policy, strategy and leadership role in Nigeria especially Delta State where I presently serve as Permanent Secretary in the State public service. I give God the glory. I wish to dedicate the award to the Delta State Government under the able leadership of His Excellency, Senator Dr. Ifeanyi Okowa, Governor of Delta State. I am motivated by the fact that Government Institutions are increasingly under pressure by a global population of 7.4 billion people yearning for an effective, efficient and transparent technology based service delivery inall aspects of governance, Agbaike said.

According to him, ” In Delta State for instance, the governor Okowa had been instrumental to the mobilization of key stakeholders in embracing the new paradigm shift induced by global technological innovations. These include the development of new models to resolve fundamental issues in the context of e-governance, e-parliament, government to government(G2G), government to business (G2B), government to citizens(G2C) as well as the implementation dynamics of artificial intelligence, broadband technology, Nanotechnology, Blockchain, machine learning (m2m), fifth generation cellular network (5g), Internetof things(IoT), among others, which collectively drive the knowledge economy and dividends that accrue to the Information Society (IS). Chairman of the 2019 P BoICT Award,” Agbaike added.

It is pertinent to also acknowledge the impressive role of the 4th estate of the realm (the PRESS) for their persistent advocacy in promoting national awareness on the fundamental importance and need for e-governance as a strategic change management intervention for rapid socio-economic and political development of our great country. I therefore strongly recommend deliberate government investment in ICT in order to harness its inherent benefits. Finally, I strongly recommend that federal and state governments should take advantage of the contributions and benefits of ICT service providers in the industry as well as encourage egg heads notably, the Oracle of the Nigeria IT Ecosystem, Chris Uwaje, Gbenga Adebayo, Professor Charles Uwadia, Board and management of CommunicationsWeek Media and a host of others who have undisputedly become intellectual properties in Nigeria’s ICT sector.

“It is worthy of note that Chris Uwaje and Professor Uwadia were instrumental to the setting up of the Delta State Innovation Hub at the instance of His Excellency, Senator Dr. Ifeanyi Okowa, Governor of Delta State. In this connection, I urge the federal government and other state governments to take a cue from Delta State in the plethora of ICT technological innovations so espoused,” Agbaike said.