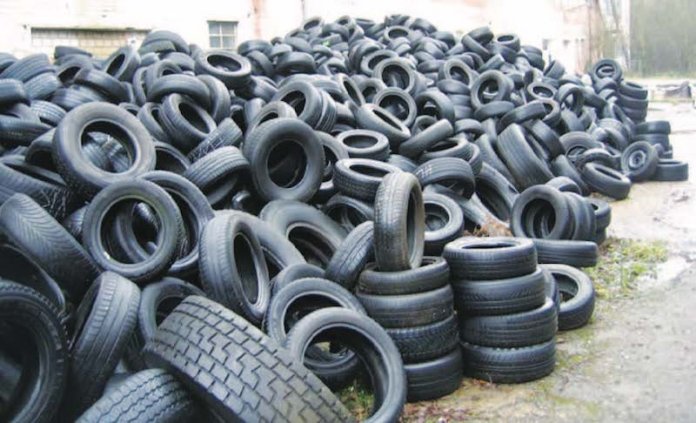 Usually, tyre failure occurs due to the combination of stress and heat, low pressure, an injury to the tyre through nails and other sharp objects, among others.

Over time, the preponderance of accidents on the high ways have been traced to so many factors ranging from negligence on the part of the driver, bad road and low quality tyres or purchase of already used ones imported into the country.

It has also been established that in a bid to pay lesser duty and maximise profits, some tyre importers get quantities meant for four containers stuffed into one. Profits are made by twisting or squeezing three to four tyres into one. The tyres are often times in this squeezed or compressed state for months and are only brought out and stretched to their normal positions after they are delivered to the markets or shops where they are to be retailed.

The most visibly affected and dangerous part is the tyre bead which contains a round metal wire. The bead of the tyre is supposed to have an airtight seal between the tyre and the rim. Where this fails, air will escape from the tyre and this could lead to explosion leading to possible loss of control and accidents.

A Customs officer who preferred anonymity told THISDAY that “Importers will pay for one container but have three to four containers volume of tyres to sell and make more profits while endangering lives. This is also one means through which government revenue leaks out.”
However, in keeping with its mandate, the Standards Organisation of Nigeria (SON) has embarked on campaigns to sensitise importers, traders and vehicle owners on the need for quality in the buying or selling of tyres.

SON has also intensified efforts in recent times to raid markets of substandard tyres as it recently destroyed substandard tyres worth over N50 million in Enugu.
It said that the aim was to save lives of Nigerians and discourage importers from further engaging in acts capable of endangering lives of vehicle owners who might use such tyres on their vehicles.

SON’s Director General, Osita Aboloma, who was represented by the SON’s Director, Inspectorate and Compliance Directorate, in the Enugu Zonal office, Obiora Manata, during the exercise performed at Emene, Enugu premises of the organisation, said that SON would not tolerate a situation in which Nigerian importers jeopardise the safety and lives of citizens by importing substandard tyres into the country and circulating same in the markets where the unsuspecting vehicle owners would buy and risk their lives and those of other road users.

He said that the agency, working in collaboration with the Nigeria Customs Service, Police, Nigerian Security and Civil Defence Corp (NSCDC) and other relevant security agencies, would always make sure that importers are discouraged from bringing into the country substandard materials of any type, stressing that Nigeria should not be a dumping ground for substandard products.

Aboloma said: “The tyres are substandard, meaning that you are not supposed to use them on your vehicles. It is dangerous to use any of these tyres on any vehicle, and that’s why we have brought them out today to destroy them.

“Ordinarily, the tyres, as manufactured, were not substandard; but because of the act of what we call stuffing and un-stuffing.
“Stuffing is a process in which a tyre is squeezed with mechanical force and rammed inside a slightly bigger tyre; and then another one is forced into the other tyre and it continues like that until you now have about four or five tyres in one. Stuffing affects the tyres in a negative manner and makes them substandard.”
A trader, Stanley Onyilimba, spoke with THISDAY in Lagos about his experience.

He said: “I was into buying and selling of Tokunbo tires before i ventured in to new tyre. Something made me to stop selling them, when you go to where they pack them or where they buy it from, you will see how they fold four –to five tyres together and you see these are wires, before you know it, they start to break. Sometimes, they come here to pump tyre, you will see that they are swollen with wires coming out.

“The problem is that after selling 20 to 30 tyres in a day, the following day, they might return 15, so what is the need of selling them and you are scared that the buyers might come back. So I sat down and said this cannot continue, one has to change, and so I tried and sell off all the tokunbo tyres in my shop.”

He went ahead to mention the quality tyres in the market but lamented that customers won’t be able to buy them because they are quite expensive.
“In this our area, if i should bring all this new tyres , i will not be able to sell any market here, because it is quite expensive and am not the only one selling them here.

“But the truth about Tokunbo tyres is that is not an option, I still prefer China tyres to used ones, but if you have money, you can go for German made tyres. Government should eradicate used tyres because it is contributing to the major accidents on our high ways.”

To Mr. Okechukwu Noah, a tyre merchant and importer, there are lot of fairly used tyres that look new.
“The fairly used tyres have grade. It depends on the one you can go for. For example, when you buy top grade which has never been used roughly it will still maintain its quality, because white people do not use things rough as we do here in the country.

“I prefer to use tokunbo as it is popularly called because most of them are imported from European countries, which means they follow laws and abide with safety regulations and what they produce are of good quality. Also they come in grades, so depending on your pocket, you can get good ones that will last for you.”
When quizzed on why new tyres burst, Noah said It depends on the quality of the tyre.

“A lot of business men prefer getting the product with lower quality because they get them at cheaper rate. So they tell people who produce them to reduce quality especially those imported from China.”
Regrettably, the Federal Road Safety Commission (FRSC) recently disclosed that said no fewer than 2,598 Nigerians died in road accidents between October, 2017 and March, 2018, according to the National Bureau of Statistics (NBS).

The bureau attributed the major cause of road crashes in the first quarter to speed violation as it accounted for 50.81 per cent of the total road accidents reported.
It stated that tyre burst and dangerous driving followed closely as they both accounted for 8.26 per cent and 8.42 per cent respectively of the total number of road accidents recorded.
FRSC Corps Marshall, Boboye Oyeyemi, recently appealed to the government to ensure the reduction of tariff placed on imported tyres into the country.
Therefore, to address the situation, the federal government is expected to empower the SON to continue its campaign which is aimed at saving lives and increasing revenues for government.