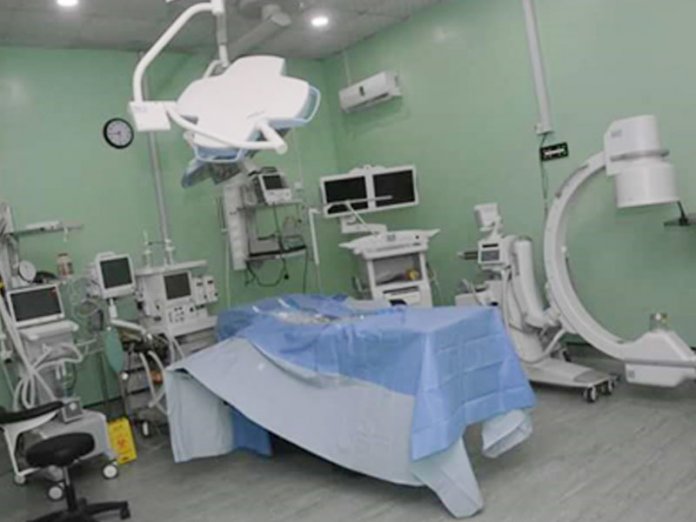 Emmanuel Addeh writes that help may have come the way of Niger Delta residents who have had to deal with cardiovascular diseases and other ailments, with the recent acquisition of the only functional machine in the entire region

Respite may have come the way of patients suffering from heart-related ailments as the entire South-south and South-east geopolitical zones now have their first functional Cardiovascular Laboratory at the Bayelsa Specialist Hospital (BSH), in Yenagoa.

A CardLab is a specially equipped hospital room where doctors perform minimally invasive tests and procedures to diagnose and treat cardiovascular diseases, involving the use of tiny, flexible tubes which can be used instead of invasive surgery, to access the heart and blood vessels.

The orgnaisers say before now, those with such serious aliments would either travel to Lagos, Abuja or fly outside the country to get medical help, but that things have began to look up with the current availability of quick rescue operation devices used for such life-threatening diseases.

They say with the equipment, the medical team can diagnose and treat blockages and other problems in the arteries, including reversal of strokes and such other cardiovascular diseases.

Renown Interventional Cardiologist, Dr. Dafe Emmanuel, in an interview at the Specialist hospital, said since the inauguration of the hospital, which was built by the state Governor, Seriake Dickson, the lab now serves the 11 states that make up the South-south and South-east.

Dafe, who heads the cardiovascular unit of the hospital, however, said patients from other parts of the country also patronised the facility, adding that this is the only functioning card lab in the Niger Delta region.
“Other card labs working in Nigeria are three in Lagos and one in Abuja. The one in Abuja serves the whole of the North and it is privately driven. In Enugu the federal government tried to establish one but it never worked.

He said over 100 patients from outside the state patronised the hospital for cardiovascular procedures in the past one year, adding that they came from Abuja, Katsina, Zaria, Calabar, Benin, Owerri, Enugu, Port Harcourt among others.

“We have had more than 100 patients since we the card lab became operational hat come from outside to get cardiovascular help here”, he said.

Dr Dafe said the laboratory was equipped to manage all cardiovascular cases such as coronary setting, right and left heart cathetisation, geoplasting, peripheral balloons among others.

He added: “We have treated many patients that were due for above knee amputation. The orthopedic doctors said they would chop off their legs. Nobody wants their legs chopped off. No matter how beautiful the artificial legs look like, they cannot be exactly like the natural leg.

“A number of them that came here, we were able to convert them. Many of them did not have the amputation anymore. Some of them we converted from above knee to below knee amputation because the gangrene was extensive and we couldn’t salvage the muscles and the tissues. We also do pace maker insertions here.

“We do minor heart surgery. You don’t open up the heart. You use needle to get into the vessel. Then pass your wires and get the work done and while doing that the patient is awake and you are talking with the patient. Everything is done and the same or next day, the patient will go.”

Community Chief Executive Officer (CCEO) of BSH, Cynthia Oye, also said though the state government owned the hospital, it was being managed by a private organisation, Oasis Global Network.

She said the hospital was also equipped to undertake other critical health procedures other than cardiovascular cases, adding that BHS was effectively handling stroke and kidney cases through state-of the-art machine.
Oye noted that the hospital was currently running free cleft lip ad cleft palate surgeries in partnership with an American-based organisation.

She said: “We have free surgeries and it is still ongoing. We started the surgeries June last year and we have had 22 successfully done so far. The hospital is in Government House. It looks nice and clean so people just assume it is expensive. Most people still don’t know that it is open to the general public. They assume it is for dignitaries and high-profile persons.”

The state government said its investment in health had started paying off, as the machine can now reverse some life-threatening medical conditions, including stroke, when presented within the first hour of attack and dead limbs due to chronic diabetes.

Commissioner for Health, Professor Ebitimitula Etebu, said the government acquired the latest equipment available in the field of medicine, to bring succour to those who desperately need it.

He said: “We have what we call CardLab. And you know in Nigeria even if we buy highfalutin equipment we don’t use them. But here it is different. When you have a stroke and you come in at the right or appropriate time, it is possible for us to reverse it.

“Most people who have a stroke are either paralysed on one side of the face, arm or leg. If such patients are brought in within an hour, we can now reverse the processes that led to it and ensure that blood flows to the affected vein, then patient will live.”