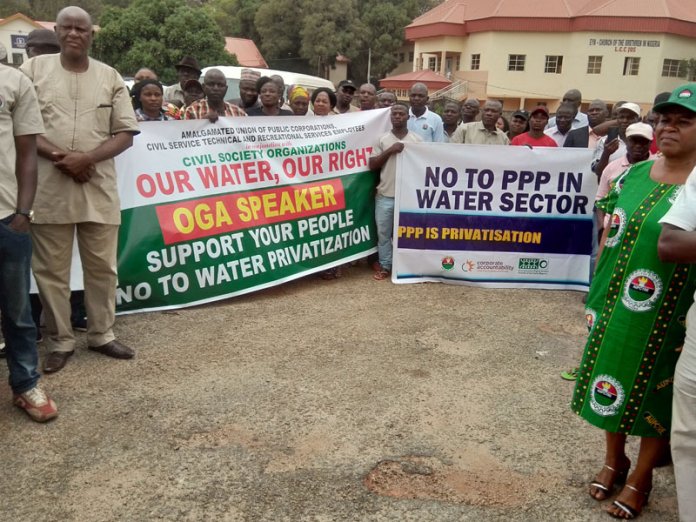 Rebecca Ejifoma writes that the move by the Plateau State Government to privatise water has been met with stiff resistance from trade unions and civil society organisations, who recently stormed the public hearing on the bill for the water sector law to demand lawmakers expunge the privatisation clause from the draft

Trade unions and civil society groups that participated at the Public Hearing on a bill for a law to provide for the Plateau State water sector law and for other matters connected, have demanded the lawmakers expunge privatisation clauses from the draft law.

After staging protest against the plans outside the premises of the Plateau State House of Assembly, the groups thronged the venue of the hearing to deliver their memoranda to the sitting precided over by Chair, House Committee on Water and Energy, Hon. Godfrey Landip, representative of Lang Tang North North.

Landip said: “This bill has passed through first and second hearing that’s why agencies were asked to bring in their contributions.”

But in its memorandum to the House, the Amalgamated Union of Public Corporations Civil Service Technical and Recreational Services Employees (AUPCTRE) canvassed support for public control and sustainable budgetary allocation to the water sector.

The AUPCTRE position was read by Comrade Emmanuel Ayeoribe who said that Public Private Partnership (PPP), Concessions and other anti-people provisions in the draft law were not in the best interest of the government and people of Plateau State in view of their inherent dangers.

The union listed some of the fallouts of privatisation which include unnecessary hike in water tariff; difficulty in regulating the management of water; retrenchment of workers in Water Corporations/Agencies and; lack of transparency in PPP transactions.

Others are: Compromising quality for profit-making; Reluctance to extend water access to the poor and; Difficulty in terminating unsatisfactory concessioning, privatisation etc.

Ayeoribe said that, “Privatisation impugns on the human right to water and places profits above the common good which we expect Honorable members of the Plateau State House of Assembly to stand for.”

In its memorandum read by Philip Jakpor, the Environmental Rights Action/Friends of the Earth Nigeria (ERA/FoEN) cautioned the lawmakers from experimenting with the PPP and any other form of privatisation, and demanded that such provisions be expunged since they are known to have failed in countries where they were introduced due to rate hikes, poor service delivery and corruption in many cases.

Referring to a section of the draft law that empowers the corporation to enter into any commitments, agreements, joint venture, performance contracts, PPP agreements in respect of the provision, distribution, supply or sale of water and sewage management services; Jakpor noted that PPP will make government, through tax payers money pay corporate entities without fail even when there are other pressing issues requiring funding.

In its memorandum which tallies with that of ERA/FoEN and AUPCTRE, the Civil Society Coalition for Good Governance also rejected privatisation and demanded that the controversial sections be removed.

Convener of the group, Steve Aluko Daniel was of the opinion that any law that opens the door to privatisation will ultimately burden Plateau citizens and would amount to sacrificing the health, well-being and quality of life of the citizenry at the expense of maximising profit.

He also wanted more women on the membership of the board of the corporation as against one in a nine-member committee proposed in the draft law to guarantee adequate membership of women and gender balance.

The groups said the World Bank Group has in the last decade been promoting the PPP and described the model as a false solution as evidenced in many countries that have experimented it.

Quoting a report by the Transnational Institute (TNI), Public Services International Research Unit and the Multinational Observatory they said that 180 cities and communities in 35 countries, including Accra, Berlin, Buenos Aires, Johannesburg, Paris, La Paz, Maputo and Kuala Lumpur, have all “re-municipalised” their water systems after failed PPP adventures.

14 countries in Africa and 12 in Latin America have experimented the model and rolled it back.

They revealed that the International Finance Corporation (the private arm of the World Bank) claims that PPP in cities such as Manila and Nagpur are success stories but evidence on ground counteract this.

“Manila’s water privatisation has led to continual price hikes, legal challenges, investigations, failures to provide certain districts with water, and has given the companies unfair returns for their work. In India’s largest city, Nagpur, PPP in the water sector has led to high prices and project delays to unequal water distribution and service shutdowns,” the group said.

Allegations of corruption and illegal activity have led residents to protest, and city officials have called for investigations of contract violations”.
They also listed some PPP failures in Nigeria, citing the Lekki Toll Road Concession and Visionscape Sanitations Solutions limited management of waste in Lagos as examples of how PPP’s do not solve public sector challenges.

They said that in the interest of justice, fairness, equality, sustainability and human rights, the Plateau State House of Assembly and indeed the Plateau State Government should resist and reject the entrapments of PPP in the water sector and encourage instead, high-quality, publicly- funded, democratically-controlled, water sector.

Any law that opens the door to privatisation will ultimately burden Plateau citizens and would amount to sacrificing the health, well-being and quality of life of the citizenry at the expense of maximising profit