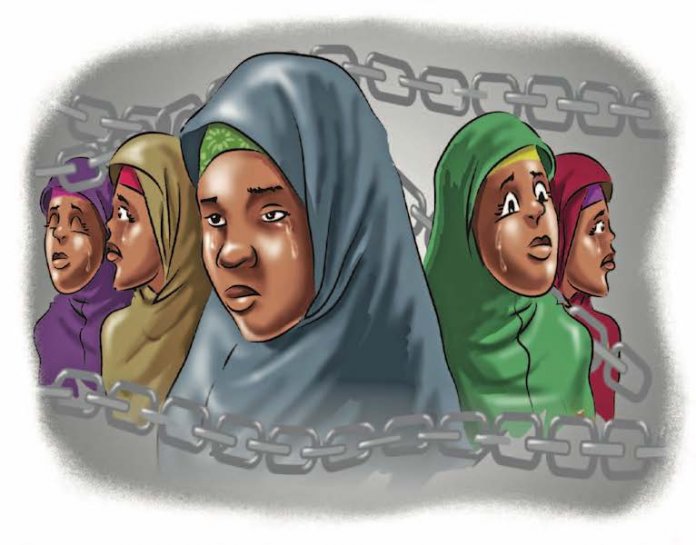 Today marks the 5th anniversary of the Chibok kidnapping – an unprecedented episode in jihadi exploitation of girls.
In the early hours of April 14th, 2014, Boko Haram abducted 276 Nigerian school girls in Chibok, Borno State. At the time, few imagined that their captivity would be so protracted. Local outrage and international indignation created a sense that the girls would be rescued in short order. Yet, half a decade on, 112 of them still remain in the firm grip of Boko Haram.

The administration of Nigeria’s President Jonathan initially denied the atrocity had happened, which fed the outrage from which the #BringBackOurGirls movement was born. A resistance led by Nigerian women and fuelled by social media, the campaign brought unprecedented international attention to the girls’ plight, and rallied the world together, creating a new alliance for common good as global leaders added their voice to the campaign.

Fueling the outrage further, the response from the authorities was lethargic and weak. The trucks carrying the girls broke down several times, requiring hours of repair, yet the army still failed to mount a rescue. Adding to the sense of calamity, after the President initially failed to provide an official reaction for weeks, the army twice claimed to have rescued the girls and twice rolled back on those claims.

In the intervening years, of the 219 girls, 107 have made it home: 4 by Nigerian military/ para-military intervention, and 21 in October 2016 and 82 more in May 2017 pursuant to a deal negotiated with the Buhari administration which took over from Jonathan’s in May 2015. Yet, today half a decade later, 112 now young women, more than half of those incarcerated, remain in the firm grip of Boko Haram.

Collectively, they symbolize all the women and girls across Nigeria who have been brutalized by Boko Haram in the last 10 years of this ruthless insurgency. In addition to killing an estimated 50, 000 people since 2011, over the course of its brutal crusade, Boko Haram has kidnapped and enslaved thousands of women and girls. Sentencing them to not only to a life of domestic and sexual slavery but a life of enforced radicalization by the tenets of its extremist ideology.

The most sadistic expression of Boko Haram’s instrumentalization of women is the group’s appalling use of girls, some as young as seven, as suicide bombers. Tony Blair Institute’s Global Extremism Monitor revealed that in 2017 Boko Haram used women more than any other Islamist group across the globe. Using women in 49 per cent of its suicide attacks in 2017, deploying 172 female assailants in three countries—Nigeria, Cameroon and Niger—and killing 248 people, including 233 civilians.

But women’s quandary and the gendered violence in the conflict with Boko Haram does not end with Boko Haram”s foot soldiers. There are chilling allegations against Nigeria’s state authorities too. In its report titled “They Betrayed Us”, published in May 2018, Amnesty International alleged that thousands of women who survived Boko Haram’s terror have faced an organised system of rape and sexual exploitation at the hands of state officials, who abused their victims with impunity as it did in several other reports. Similarly, the Human Rights Watch had similar allegations, all of which were dismissed as unfounded by Nigerian authorities.

All these go to show that women in north-eastern Nigeria have suffered horrendous experiences in the last 10 years. This is an issue that must be squarely faced in community healing process. Nigeria has so far deradicalised 254 ex-Boko Haram fighters under its amnesty scheme preparatory to reinserting them back to community. There are reports of a comprehensive dialogue with the group as more fighters who laid off arms are being treated for reintegration. To succeed, reintegration must include, among other things, some form of community-based truth-telling, justice, forgiveness, and reconciliation mechanism should be instituted.

Women must be at forefront of all negotiations. Allegations of sexual abuse must be properly investigated, documented and addressed. There must be proper psychosocial support for survivors and members of society need to be properly educated not to stigmatise, but support, women and girls who have suffered these abuses. Until this is achieved, northeastern Nigeria cannot heal the deep wounds inflicted by this brutal barbaric group that exploited elements of Islamic teachings to wreak its havoc.

•Aisha is a co-founder of the #BringBackOurGirls Campaign and CEO of the Murtala Muhammed Foundation. Bulama is an Analyst at the Tony Blair Institute and a Human Rights Lawyer. They are both PhD scholars with a focus on Boko Haram at SOAS, University of London.