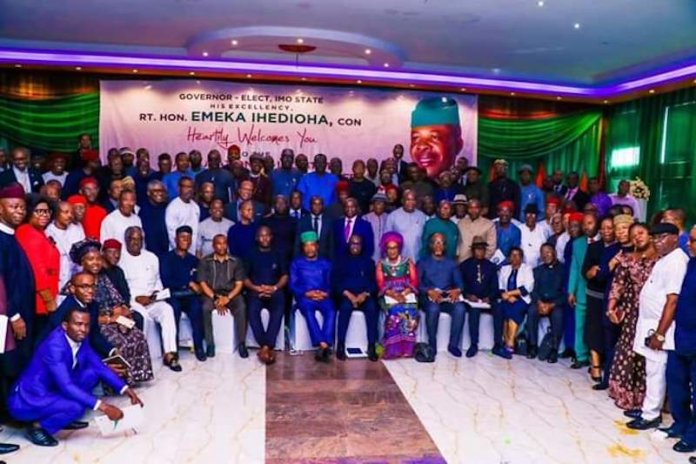 Amby Uneze writes that the upbeat Governor-elect of Imo State, Rt. Hon. Emeka Ihedioha has inaugurated an all-star transition technical committee with the task of breathing life into his campaign manifesto

Nobody in Imo state has expressed doubt on the ability of the Governor-elect, Emeka Ihedioha to rebuild the state from the ruins of maladministration which the outgoing government had subjected it. It is on record that the state was under suppression during the administration of Governor Rochas Okorocha, who governs the state with impunity, disregarding due process and rule of law.

One of the sad landmarks of the Okorocha era is the dilapidation of the structures of government such as the civil service system, where iti s alleged that no single file can be found in any ministry or department to measure the extent of work-in-progress or work done at any point in time.

The other arms of government, the legislature and judiciary (at the state level) were non-existent because the executive arm swallowed what would have been the principle of democratic norm.

Realizing the difficulty his government may face on assumption of office next month, in getting proper hand-over notes and relevant information from the outgoing government, Ihedioha decided to set up 140 egg-heads that are specialists in their various fields of endeavour, ranging from academicians, technocrats, legal luminaries, medical doctors, telecommunication experts, retired military and police personnel, accountants, bankers and politicians of repute to assemble an effective document that can guide the new government.

While announcing the 12 sub-committees of the Transition Technical Committee (TTC) on April 4 at the Rockview Hotels, Owerri, the Governor-elect gave them four weeks to conclude their assignment and deliver their report, while the Main Committee of TTC was given six weeks to work.

Ihedioha disclosed that, “To make the job of this Transition Technical Committee more effective, it has been sub-divided into sub-committees with clear terms of reference which shall be handed over to the chairmen of the respective sub-committees. The sub-committees will be given four weeks to complete their work and forward to the Main Committee which will now have a further two weeks to consolidate their report – making a total of six weeks.”

While defining the main task of the TTC, he maintained that the committee must bring life to the manifesto of the incoming administration so that the process of steering the government for best results would be enhanced.

He said, “When we started this journey, we had a carefully articulated manifesto put together by respected professionals from this state. Our people keyed into this manifesto, and with their votes and the grace of God, we are here today. Your principal task, therefore, is to bring life to the manifesto so that we can hit the ground running, with deliverables and timelines.

“Let me say here that we are not bereft of ideas as to what we want to achieve. We, however, believe in team work and we will not shy away from harnessing the well acknowledged potentials of our people. We also know that with accomplished men and women like you, our job can only be easier to make Imo great again.

“You came from different professional backgrounds with competences that will help us identify measurable policy frameworks and how to raise and manage the requisite resources after taking a critical look at what the out-going administration is handing over to us.”

Ihedioha restated his resolve to enthrone the regime of purposefulness, transparency in governance and observance of the rule of law in the practice of democracy in Imo State.

“My dear brothers and sisters,” he said, you will agree with me that in recent times, our dear state, Imo has been in the news for negative reasons, depicting what we are not, but we are determined and motivated to change the narrative. Ordinarily, we boast of the best in all sectors in the land, and we have to make this count.

“We will work very hard to sustain the trust of Imo people. God helping us, we intend to bequeath a legacy of purposefulness, transparency in governance and observance of the rule of law in the practice of our democracy,” he said.

Knowing the huge task ahead of him, the governor-elect reminded Imo people of his desire to work very hard to sustain the trust and confidence they reposed in him by their vote in the March 9 governorship election, he vowed not to let the down.

“On 9th March this year, the people of Imo State voted overwhelmingly for us because they believe that we can give them good leadership. And with elections over, the business of governance has to commence. Our people are eager, expectant and seem assured that we will be true to our words. I find this enthusiasm humbling and at the same time challenging,” he assured.

Ihedioha, however, thanked everybody present and stated that the TTC became necessary because of the need to purposely lay the proper foundation for the task of rebuilding the State.

He said, “In the course of the campaign, we promised good governance while stimulating development in all sectors and across all the zones of our dear state.

“Having recognized that we cannot deliver on that promise without leveraging on the experiences, and expertise of the broadcast possible diversity of Imo people, we are here today to inaugurate the transition committee that will help us with a clearer roadmap to achieve the goals we have set for ourselves,” he added.

He consequently concluded, “The task of rebuilding our state at this time of our history is very daunting and enormous. I have every confidence that you will all help us to achieve that objective.

Some leaders made few remarks with Chief Emmanuel Iwuanyanwu reminding the audience that the governor-elect is now for the entire Imo State. He urged Imo people to regroup and close ranks and provide necessary support to the governor-elect and the incoming administration.

The committee has the former deputy governor of the Central Bank of Nigeria (CBN), Prof Ernest Ebi as Chairman with Ambassador Kema Chikwe as Vice Chairman. It is divided into 12 sub-committees with Dr. Chinedu Okpaleke as Secretary. Each of the sub-committees has a Chairman and a Secretary.

In his vote of thanks, the Chairman of the Transition Technical Committee, Dr. Ernest Ebi, pledged that they will do a good job and produce a good roadmap for the incoming administration.

Knowing the huge task ahead of him, the governor-elect reminded Imo people of his desire to work very hard to sustain the trust and confidence they reposed in him by their vote in the March 9 governorship election, he vowed not to let the down