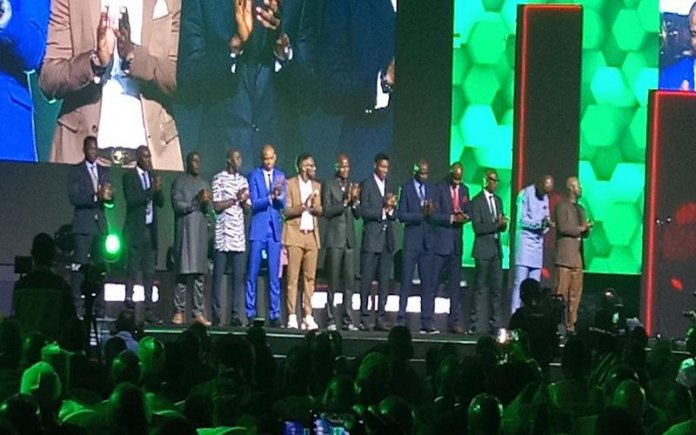 Twenty-five years after Super Eagles won the AFCON 1994 in Tunisia as well as qualified for the FIFA World Cup for the first time, that golden generation of players were celebrated on Monday night in Lagos. DURO IKHAZUAGBE who witnessed the 2nd Aiteo-NFF Awards reports…

Rashidi Yekini was an enigma of Nigeria football. Almost seven years after the man affectionately called ‘Goals-King’died on May 4, 2012 in Ilorin, his name re-echoed again at the Aiteo-NFF Football Awards that held in Lagos on Monday night.

The former Vitoria de Setubal player in the Portuguese topflight whose name was dreaded like plague by Nigeria’s opponents in the ‘Beautiful Game’ around the continent and beyond, ‘resurrected’in the minds of the football family that witnessed the second edition of the Aiteo-NFF Awards inside the Eko Convention Centre on the Lagos Island.

For the first time since Stephen Okechukwu Keshi led the 1994 Super Eagles, now commonly referred to as the ‘Golden Generation,’to win the AFCON in Tunisia and also qualified Nigeria for her first appearance at the World Cup held in the USA, the Nigeria Football Federation (NFF) led by Amaju Pinnick, fished out these worthy ambassadors of the country’s football for special recognition.

Sunday Oliseh, the effervescent member of that squad, while reeling out the names of five of their members who have died, recalled the influence Yekini had on the team. He revealed that goal scoring comes to the gangling forward as easy as drinking a glass of water. Speaking in Yoruba to drive home Yekini’s romance with goal scoring, Oliseh said: “ Really sad we are missing Yekini this night of honour for our 1994 squad. In my role in the midfield, Yekini would always tell me: ‘Sunday, a ni ko sha ti nan siwaju fun mi.’ Literarily speaking, he enjoys to get the ball laid on his pathway so that he can take on our opponents’defence. That was trademark Yekini for you,” observed Oliseh whose revelation was greeted with applause by the entire hall that included Yekini’s daughter, Omoyemi.

The night was not all about Yekini but affectionate football followers who remembered the 34 goals the former IICC Shooting Stars forward scored for Super Eagles in 58 appearances were transported beyond the Eko Convention Centre into the era Nigeria’s senior national team was dreaded due to the quality of players in the team. Flashes of Yekini scoring Nigeria’s first World Cup goal in the 3-0 drubbing of Bulgaria in that debut outing at USA ’94 made the evening beautiful.

Oliseh was not done yet in revealing some of the things that made the 1994 squad handled by Clemens Westerhof unique.

Pointing in the direction of Okocha, Oliseh also revealed how on several occasions he almost engaged the former Bolton Wanderers star in fisticuff.

“Okocha is an exceptionally gifted player, more talented than some of the biggest names the world is celebrating today. But there were times when we almost fought because he was always holding on to the ball too long,” stressed Oliseh on the dribbling habits of the former midfield maestro. Okocha flashed his trademark toothy smile to the audience.

Apart from Yekini, others who have died like Keshi, goalkeeper Wilfred Agbonavbare, defender Uche Okafor and midfielder Thompson Oliha were also remembered for their labour for their fatherland.

Emmanuel Amuneke, Michael Emenalo, Emeka Ezeugo, Efan Ekoku, Isaac Semitoje and Chidi Nwanu could not make it down to Nigeria for the ceremony. While a couple of the players present on Monday night did not make the final cut for the World Cup in America, six members of the group went ahead to join the Dream Team and return to America to conquer – by winning Africa’s men’s football gold at the Centennial Olympics in Atlanta two years later.

In other for the labour of these heroes past not to be in vain, Augustine Eguavoen begged the NFF to help some of their colleagues who are yet to get the houses promised them for winning the AFCON ’94.
“Five of our colleagues have died. Yekini, Uche Okafor, Thompson Olihah, Wilfred Agbonnavbare, and Steven Keshi are no more with us. We don’t want their labour to be in vain. NFF should please help us talk to the right quarter in government to release those houses for our members who are yet to get theirs,” observed the ex international fondly called Cerezo.
Eguavoen insisted that it will be unfair to promise and fail. “ If any one of our dead colleagues is yet to get the house before he died, they have children they left behind. Let them get the houses.”

Before the special recognition awards to this ‘Golden Generation,’Super Eagles’ stand-in captain Ahmed Musa and Super Falcons’ opposite number Onome Ebi took the big gongs as best players of the year 2018 in the male and female categories.

Musa beat both Odion Ighalo and Alex Iwobi to the award.
His second goal in the 2-0 defeat of Iceland at the World Cup in Russia was also adjudged as the Goal of the Year. He was selected ahead of the goals scored by Ighalo and a player from the domestic league.
Villarreal forward in the Spanish LaLiga, Samuel Chukwueze won the Young Player of the Year category while Nasarawa Amazons player, Anam Imo won the female version. Aiteo Federation Cup winning coach, Gbenga Ogunbote was selected as Coach of the Year while Coach Thomas Dennerby who led the Super Falcons to win the 2018 women AFCON in Ghana won the female version.
Akwa United FC won the Fair Play Award while Kano Pillars Supporters Club won the best supporters of 2018.

President of the Nigeria Football Federation and First Vice President of CAF, Amaju Melvin Pinnick, once more eulogized the present administration of President Muhammadu Buhari for providing the conducive environment for football to thrive and for total support for the NFF and the various National Teams, while calling on Nigeria’s other billionaires and well-heeled companies to emulate Aiteo Group and boost the development of football in Nigeria.

Business mogul and politician, Chief M. K. O. Abiola was honoured with the NFF Presidential Award, while Governor Akinwunmi Ambode of Lagos received the Lifetime Achievement Award for his hefty support for football projects and programmes of the National Teams.

Secretary-General of FIFA, Ms Fatma Samoura (the first African/first woman to occupy the position) was honoured with the NFF Order of Merit Award, as Presidents of 18 Member Associations of FIFA, the Abia State Governor (Chief Okezie Ikpeazu), the Acting Governor of Edo State (Comrade Philip Shaibu), two Governors-elect (Babajide Sanwo-Olu of Lagos State and Abdulrazak Abdulrahman of Kwara State) and captains of industry, political juggernauts, A-class artistes and heavyweight stakeholders of the game watched at the event.

Goal of the Year: Ahmed Musa

Team of the Season: Super Falcons 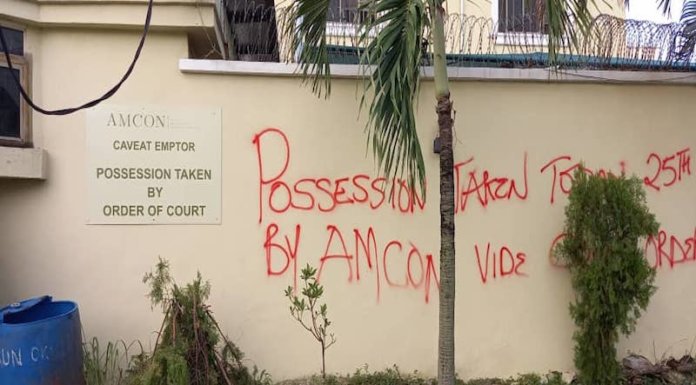