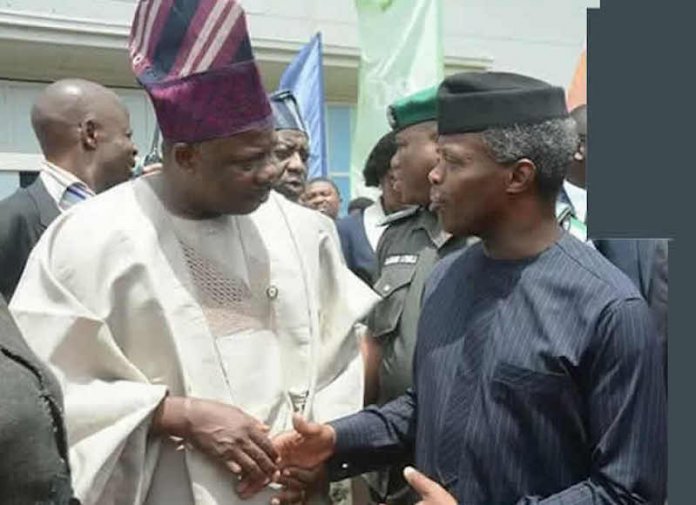 How  Ogun Governor Shunned Vice President’s Thanksgiving
Only a fellow victor would want to be seen in the company of winners. So it proved over the weekend as outgoing Ogun Governor, Ibikunle Amosun was conspicuously absent at the thanksgiving service organized by vice president Yemi Osinbajo to mark President Buhari’s reelection victory.

Like a vanquished foe who would rather die than receive the goblet of water from his conqueror, the governor remains recalcitrant, refusing to accept his defeat with the grace and magnanimity expected from someone of his lofty station. He was extended an olive branch in the form of the invitation to the thanksgiving service which took place on Sunday. However, he was nowhere to be seen at the august occasion, thus further fanning the flames of his cold war with the APC hierarchy.

Amosun, despite his recent anti-party activities, remains a card-carrying member of the ruling All Progressives Congress. Thus it came as a rude shock to many that he did not show up for an event that was attended by the cream of the APC crop.

This is despite the fact that the general election thanksgiving was held in his backyard of Ikenne, Ogun State. The event saw prominent stalwarts like Lagos governor Akinwunmi Ambode, Senator Godswill Akpabio, Oyo governor Abiodun Ajimobi, and former minister of state Senator Musiliu Obanikoro among others give their congratulations to the vice president on a successful reelection bid.

The Amosun-shaped hole at the event is not unconnected with a silent war brewing between him and Osinbajo. It is no news that Amosun’s bid to maintain control of the Ogun government house through his protégé Adekunle Akinlade of the Allied People’s Movement was truncated by Dapo Abiodun of the APC who rode to victory ably supported by the vice president.

Since then the bruised and battered governor has had an axe to grind with all those that poured water on the fire of his ambitions. Though he managed to scale the Ogun Central electoral hurdle to become senator-elect, he has since been suspended by the party for not supporting the candidacy of Dapo Abiodun, among other infractions.

Rather than turn penitent, like the biblical prodigal son, Amosun remains unrepentant, fighting fire with fire. Despite the persistent pleas of certain stakeholders in the state, he has refused all entreaties to formally congratulate the governor-elect Dapo on his victory.