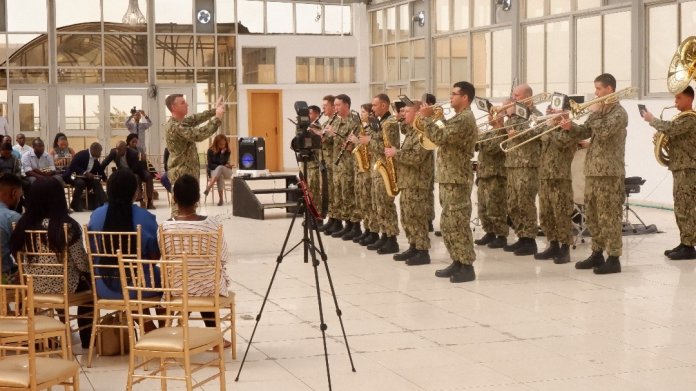 Students of University of Lagos and Lagos State University were among the selected persons who were invited recently for the masterclass with the U.S. Naval Forces Europe Band.

Held at the rooftop of The Lekki Coliseum, Lekki, Lagos, the excitement and euphoria of the students were so palpable as the soldiers garbed in their uniforms and carrying different musical instruments posed for their first performance.

As the hall erupted in a melodious rendition of ‘The Black Horse Troop’, written by American John Philip Sousa in 1924, the audience which included members of the Nigeria Trumpet Group and the Eko Brass Band revelled in the harmonious sounds of saxophone, trumpet, bass, cymbals among other instruments.

Assistant Director of the band, Lt. Matthew Anderson, who also doubled as the conductor, welcomed his guests and gave a brief introduction of their band.
“We are based in Italy and this is all we do,” he said referring to their musical talents. He delved right into the essence of the masterclass which was on wood and percussion instruments, educating them on different ways to render a song with their musical instruments.

By the time Anderson was done with his tutorial, the seven-man band known as Topside were ready to wow their audience. From performing popular hits such as ‘Waka Waka’ the official song of 2010 FIFA World Cup by Colombian singer Shakira and South African Freshlyground; to inviting members of the audience to join them on stage as they sampled more songs, the masterclass turned to a theatrical soiree of horns, bass and cymbals.

The band’s visit to Nigeria is part of its efforts to strengthen ties with partner nations across Europe and Africa. For this visit organised by the Public Affairs Section of the United States Consulate General Lagos is to support the ongoing 2019 Obangame Express, an annual multinational maritime exercise on the Gulf of Guinea.