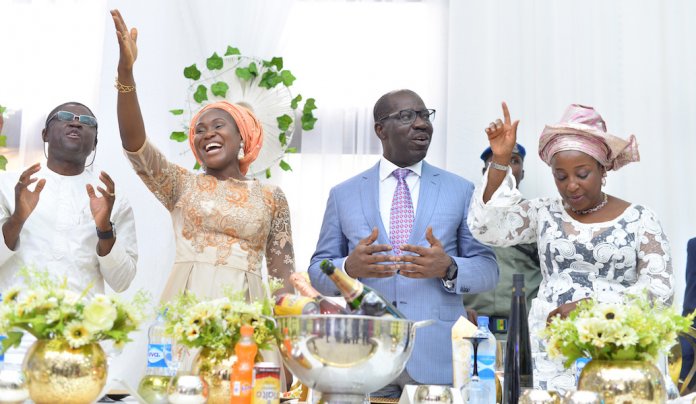 Adibe Emenyonu writes that it was celebration galore in Edo State as Governor Godwin Obaseki and the All Progressives Congress held a thanksgiving service for a violence free election, as well as the triumph of the party at the polls, having cleared all 24 seats in the just concluded house of assembly elections

When the All Progressives Congress (APC) party in Edo state was faced with defeat during the presidential and national assembly elections, it never expected a turn around in the state assembly polls. However, when the results came, it was a triumphant one because the party did not expect to win so overwhelmingly. When the results began to tickle in, to their uttermost joy, the party won 24 of the 24 seats.

It was on this basis that the state Governor, Mr. Godwin Obaseki, led members and supporters of the All Progressives Congress in the state, to a thanksgiving service to acknowledge the role of God in the violence-free event and celebrate the triumph of the APC at the polls.

In his sermon taken from Psalm 135: 5-6, the Archbishop of Bendel Province Anglican Communion, Most Reverend Friday Imeakhai, commended the governor for relying on God and making it mandatory to always give thanks to God.

Represented by Venrable Joseph Osueni, Archbishop Imeakhai, said the victory of the party in the election was divine as no party in the history of the state has won all the seats in the state House of Assembly.

He also said: “I want to commend the governor for his prompt payment of workers’ salaries and outstanding pension arrears.”

Imeakhai however urged the governor to do more in other sectors such as agriculture, education and in the provision of more infrastructural facilities.

On his part, the Chairman of Christian Association of Nigeria (CAN) Edo State Chapter, Bishop Oriname Oyonnude Kure, commended the governor for his developmental strides in the state.

He noted the speed with which the governor is sustaining the state’s development and urged him to sustain the developmental tempo.

He added, “You should keep the fire of development believing God will stand with your administration to serve the state and nation well.”

Speaking at the thanksgiving service held at the Samuel Ogbemudia College Benin City, Obaseki said with the massive support given to candidates of the APC in the general elections, particularly in the state House of Assembly election, there is no excuse for non-performance on the part of the party.

According to him, “Every achievement made by my administration so far has been divinely directed as God directs my everyday activity.”

This victory, he stressed, “throws up a lot more responsibility as the victory in the election shows the people trust our administration and we can’t afford to fail them.
“All the 18 local government chairmanship seats in the state are occupied by members of the APC. All the newly elected 24 Edo State House of Assembly members from various parts of the state are APC members”.

Against this premise, the governor pledged to rededicate himself and his administration to make life better for the citizens and inhabitants in the ancient Kingdom.

“With our party’s dominance of the political space, we have no excuse not to deliver. I want to rededicate myself and this administration, and reinforce our earlier promise to put Edo people first at all times and to make life more comfortable and better for them”, he said.

He noted that there was a lot to thank God for, as all the elections held in the state since he became governor have been violence-free, with no life lost.

The governor who frowned at cult-related activities in the state, vowed to deploy a mix of strategies to stamp cultism out of the state and called on parents to urge their children and wards to stay away from cult-related activities as no one will be spared if caught in the act, adding that the necessary laws on cultism which were passed by the state House of Assembly will be effectively used.

“Anti-cultism is my next priority and we have a law on cultism in place which we will use to punish offenders. With the assistance of the Edo State Commissioner of Police, we will set up a special squad on cultism, to deal with offenders and render it history in the state,” he said.

Obaseki also acknowledged and applauded the support and prayers of the Benin Monarch, Omo N’ Oba N’Edo Uku Akpolokpolo, Oba Ewuare II, whom he said have played a vital role in the success of his administration.

“I thank the Oba of Benin for his support and prayers which have led to the several successes that this administration has recorded. I thank all the past governors and their deputies for their support and I urge them to sustain their support for us, so that we can complete the good work we are doing for all Edo people and residents. Our mothers and sisters in the markets, the labour unions; TUC and NLC, are not left out,” Obaseki stressed.

Addressing members and supporters of the party at Government House, Obaseki stressed that his administration will no longer accept boreholes and toilets as constituency projects from members of the national and state assemblies.

“I will not accept boreholes and VIP toilets as constituency projects any more. Edo people have spoken that they want real change and we must deliver the change to them.

“For the elected members of the House of Assembly, every constituency you represent must have something meaningful in the budget on a yearly basis.

“I will not accept N40 million constituency projects, if you are not able to appropriate between N500 million to N1 billion, then you are not working for your constituency,” the governor said.

He added that duplication of projects would not be allowed, to ensure for the efficient use of the state’s resources.

Obaseki further said that he would be holding interactive sessions with the party members in the national assembly on a monthly basis to review their projects, noting that the elected APC legislators have no reasons not to deliver good governance to Edo people who gave them the mandate to serve.

Responding, Hon. Peter Akpatason, the House of Representatives member-elect for Akoko Edo Federal Constituency, thanked the governor for the massive support he gave all candidates of the APC during the elections, adding that Obaseki spurred them to victory.

Akpatason who is elected for the third time, promised to attract the support of the federal government to the state and said that a better synergy between the state house of assembly, national assembly, state and local governments on project execution will ensure the judicious use of the state’s resources.

Speaking on behalf of the newly elected state House of Assembly members, Hon. Washington Osifo, said they would ensure the executive succeeds in its endeavour.

“I want to assure you that you will enjoy our support and you will be happy at the end of the day that you have all the 24 seats in the state assembly. We will ensure that as you are working for the good of Edo people, we will give you all our support,” he said.