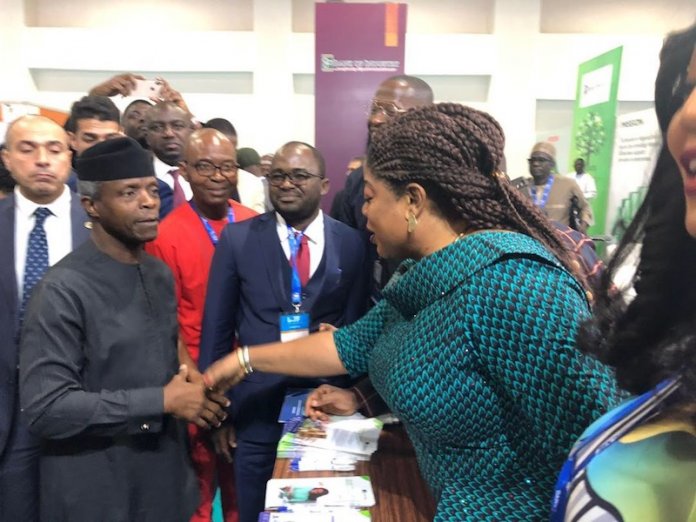 Ayodeji Ake writes that at the recently held Intra-African Trade Fair, organised by AFREXIM Bank Cairo in Egypt, Fidelity Bank reaffirmed its commitment to advancing the course of Micro Small and Medium Scale Enterprises, as well as Nigerian exporters through its robust engagement with over 100 exhibitors

Since the decolonisation and political liberation of Africa in the mid-to-late 1950s and 1960s, greater economic integration has long been keenly sought after by the continent’s political leaders. In many countries across the black continent, the political hierarchy at various official conferences and formal summits have promoted the idea and even gone ahead to formulate and implemented various trade policies and agreements at a regional level to enhance trade integration. However, the results leave much to be desired.

Accelerated growth in Africa since the year 2000 has given rise to a renewed impetus to establish closer economic and political ties among the continent’s numerous nations. In fact, this current disposition is based on a heighten appreciation of regional integration as a critical imperative to Africa’s growth and a clearer understanding of the past failures.

That said, the just concluded Intra-African Trade Fair 2018 (IATF 2018) in Cairo, Egypt was a defining moment for Africa and signaled the beginning of a new trade paradigm in the continent.

Considered the first of its kind and conceived as the first major outcome of the African Continental Free Trade Area (AfCFTA), Africa’s single market of over one billion people, the fair was expected to herald a shift from the current extra-continental skewed trade landscape to increased intra-continental trade footprints and regional market integration. It is imperative to note that the inaugural edition of the IAFT came with big promises particularly in relation to trade facilitations and financing deals brokering.

The fair delivered on all fronts with total deals in excess of $25 billion brokered at bilateral and multilateral business and country levels. Interestingly, the federal government signed a total $2.2 billion investment deals at the IATF for regional trade expansion and industrial parks. Professor Benedict Oramah, President, African Export-Import Bank (Afreximbank) while responding to the investment drive said, “We are indeed proud to witness this indication of what the AfCFTA Agreement can yield for intra-continental trade.

“By bringing together buyers and sellers under one roof, in the first intra-African trade fair of its nature on the continent, Afreximbank is succeeding in facilitating the transformation and integration of African economies”, he added.

Fidelity Bank Plc was part of the Nigerian delegation at IATF, which held from December 11-17, 2018 to forge stronger business ties with foreign investors as well as address the prevailing challenge of access to trade and market information amongst countries on the continent.

Led by the Bank’s Executive Director, Lagos and South-West Directorate, Mrs. Nneka Onyeali-Ikpe and other senior executives, the bank through its robust engagement with over 100 exhibitors reaffirmed its unbridled commitment to advancing the course of Nigerian exporters and Micro Small & Medium Scale Enterprises (MSMEs).

“As a bank, we are really passionate about building Nigerian entrepreneurs. We have committed ample human and material resources to run the products and platforms in order to drive this objective. Its short-term goal is to become the most innovative SME banking business in Africa in the next two years, whilst helping our clients build sustainable businesses of the future”, Onyeali-Ikpe said.

The bank’s long-running support for the growth of small businesses in Nigeria was evident as it extended invitations to its customers’ bank-wide to the attend the week-long event. The following companies made the trip including the following: Honeywell Flour; African Agricultural Products; Tigers Foods Limited; GB Tannery; amongst others.

From a purely banking business perspective, Fidelity had an excellent outing as demonstrated by the lender securing financial deals in excess of $110 million. The bank’s customers secured product off-take deals in excess of $5 million. Key deals negotiated in this regard but are not limited to the following: GB Tannery secured leather off-take deals with two Italian companies; African Agriculture Products secured a sesame seeds trade deal with a Sudanese commodity trader; Honeywell secured deal with the Egyptian Army.

Speaking on his experience at the Fair, Garo JijjaniSule, Managing Director, GB Tannery Limited was full of adulation for the bank, further disclosing that the bank has consistently supported efforts aimed at boosting non-oil sectors of the economy by providing innovative funding schemes and technical advisory services to small businesses. Asides the transactional benefits of the IATF outing, the trip also afforded the bank the opportunity to forge stronger bonds with its customers to unlock more values from the relationships.

At the event, Nigeria hosted its Country Day with the Vice President, Prof Yemi Osinbajo, leading a tour of the Nigeria pavilion at the IATF 2018. In his address, he said, “Nigeria places a high premium on the economic integration of the continent and has come to the IATF with a delegation that represents a wide variety of industries and goods, showcasing the rich diversity of the country.” He said Nigeria’s digital economy was one of the fastest growing in Africa, with the technology sector contributing nine percent of the nation’s GDP.

The vice president also lauded the country’s growing entertainment sector, noting that Nigeria’s film industry, the third largest film industry in the world, generating about $600 million annually and being a critical employment generator in the country. Conversely, the specific target of IATF and the broader AfCFTA is to move intra-African trade from 15 per cent of total continental trade to 22 per cent by 2021. In contrast, intra-continental trade levels in Europe and Asia are 59 per cent and 51 per cent respectively.

To this end, Fidelity Bank will continue to explore fresh opportunities to improve the competitiveness of exporters and MSMEs in Nigeria. The lender had partnered with the Nigerian Export Promotion Council (NEPC) and the Lagos Business School (LBS) to provide impactful, world-class training needed to improve the attractiveness of Nigerian enterprises, particularly export-oriented businesses and the associated value-chain players in the international market.