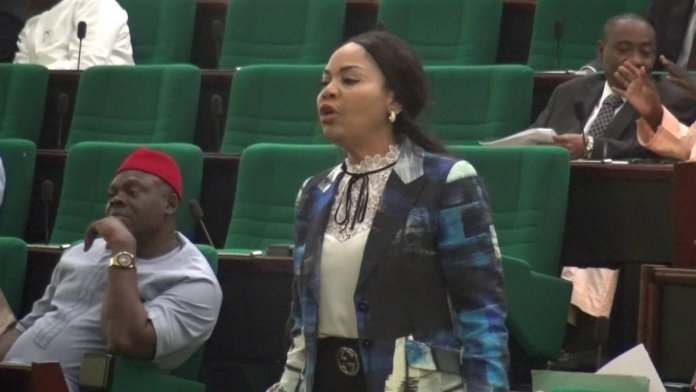 Ahead of the zoning arrangement of the All Progressives Congress (APC), the only female member of the House of Representatives vying for speakership position, Hon. Nkeiruka Onyejeocha, has officially declared her intention to contest for the highest position in the green chamber.

Onyejeocha, who is chairman, House Committee on Aviation and a fourth time lawmaker representing Isuikwuato/Umunneochi/ federal constituency of Abia State, told journalists that she hopes APC will consider her and her zone for the office.

The lawmaker, who attended the Monday APC interactive meeting with newly elected members held at the Yar’ Adua Centre, Abuja, with her manifesto for the 9thassembly speakership titled: ‘Seeking Your Support,’ told journalists in her office in the House of Representatives wing of the National Assembly that she was ably qualified for the job and that she was ready to work with the executive to move Nigeria forward.

She noted that: “I am humbly seeking your support and vote to secure the position of Speaker of the House of Representatives of the 9th National Assembly.

“I believe I possess the requisite legislative skills, knowledge, experience and temperament to be Speaker of this great House.”

She said given the opportunity, she would improve communication with the general public, facilitate improved internal communications among members, adopt a legislative agenda with a clear framework for compliance and monitoring and ensure improved lawmaking.

“A number of key reform bills were proposed, considered and passed in the 8th House of Representatives, chief among them are the constitutional amendment bills, which contained significant amendments such as financial independence for counterpart in the state i.e state assemblies. A number of some constitution amendments were not assented to while some others key reform bills were not concluded or adopted by the 8th House with its term running out. This include bills such as the Police Reform Bill, Petroleum Industry and Governance Bill (PIGB), Universal Basic Education Act amendment Bill, the National Assembly Budget and Research Office (NABRO) Bill, Audit Bill, Witness Protection Bill etc. I will work to ensure that these bills are revisited.

Also, the chairman, House of Representatives Committee on Media and Public Affairs, Hon. Abdulrazak Namdas representing Jada/Ganye/Mayo Belwa/Toungo federal constituency of Adamawa State, has indicated readiness to officially declare his intention to run for the office of speaker of the 9th House Tuesday.

As in the case of Onyejeocha, the declaration slated to come up at Sheraton Hotels, at 3pm Tuesday, is billed to come ahead of the zoning arrangement for principal offices which the party is expected to announce during the week.

Already, as the clamour for the leadership of the 9th assembly continues to gather more momentum, youth of the South-east extraction under the umbrella of South East All Progressives Congress (APC) Youths Consultative Forum, have urged the leadership of the party to zone the speakership to their region.

The National Coordinator of the forum, Mr. Romanus Oguleme, in press conference held in Abuja Monday stated that the South-east region parades credible and ranking lawmakers with credentials to lead the green chamber and even the red chamber.

He implored the APC not to scheme out the South-east in the National Assembly leadership as was the case in 2019, stressing that zoning the speakership to South East was in line with President Muhammadu Buhari’s promise of inclusive government.

“We categorically state that the South-east has two ranking members of the APC and these two: chairman House Committee on Healthcare Services, Hon. Chike Okafor, and chairperson House Committee on Aviation, Hon. Nkeiru Onyejeocha, are eminently qualified to run for Speaker or to be appointed as principal officers.

“If the performance of both members in the 8th Assembly should be used as criteria, they have proven themselves capable of handling delicate and sensitive assignments,”Oguleme stated.