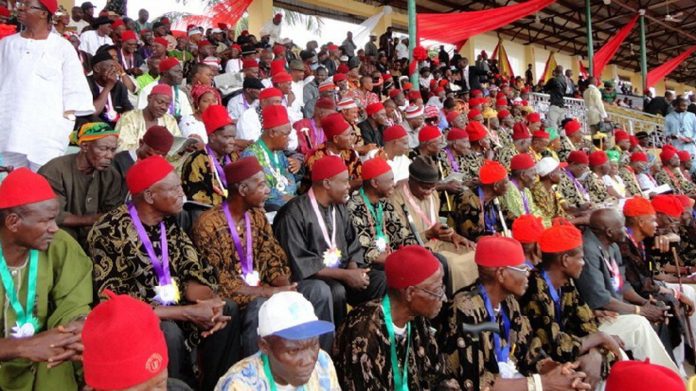 This is coming as Anambra State-born multi billionaire businessman and philanthropist, Prince Arthur Eze, has extolled the virtues of Abia State Governor, Dr. Okezie Ikpeazu, saying he represents the future of Ndi Igbo.

The Igbo leaders also canvassed for a post-election Igbo agenda even as they hailed the leadership of the apex Igbo sociocultural organisation, Ohanaeze Ndigbo for taking a firm, enlightened and focused position in the build-up to the just-concluded general elections.

They expressed appreciation to Nwodo for standing firm on the priority Igbo position for the restructuring of Nigeria based on greater devolution of power and resources from the centre to the federating units and praised the President General for ignoring saboteurs of Igbo cause because he has been vindicated by the massive Igbo votes along the direction that Ohanaeze had endorsed.

The Igbo leaders reiterated that the task of restructuring Nigeria into a nation that works for all its citizens and not just for only a section of its citizens, remains the top priority agenda of Ndigbo in Nigeria.

Eze, who spoke when Ikpeazu paid him a visit at his Enugu residence, at the weekend, said that Ikpeazu has the character of a true Igbo leader like that of late Dr. Sam Mbakwe, governor of old Imo State.

“You are a good man. Your humility makes people to love you. You also respect people. This is why Abia people love you. And they voted you again as their governor. Please don’t change this good character.

“You have Igbo character like that of late Sam Mbakwe of old Imo State. Mbakwe took good care of Imo State when he was governor and you are doing the same thing in Abia today. That is why they love you. You are a good Igbo leader. You represent the future of Igbo nation. You in Abia, Governor Ugwuanyi in Enugu and Governor Dave Umahi in Ebonyi, you people must ensure that Ndi Igbo unite.”

“I have seen that you people have the interest of Ndi Igbo at heart; please unite our people,” he concluded.