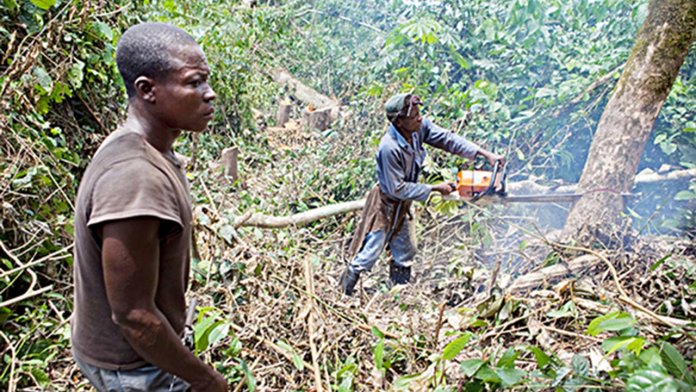 By Udora Orizu in Abuja
The federal government on Thursday expressed dismay over disasters ravaging the country, which it attributed to the indiscriminate felling of trees from forests without replacement.
Speaking at the 2019 International Day of Forests in Abuja, with the theme: ‘Forest and Education’, the Minister of Environment, Hassan Suleiman Zarma, noted that many Nigerians are not really appreciating the importance of forests, a situation, he said, that had led to various disasters.
Many residents of Osogbo, Osun State, South-West Nigeria were rendered homeless due to flooding.
The minister lamented that the rate of deforestation and its accompanying loss of between 350,000 to 400,000 hectares of land every year is causing serious flooding, erosion, desertification, biodiversity loss and declining food security.
“Equally worrisome is the fact that high rate of unregulated exploitation is causing the country huge losses in taxable income and foreign exchange because such unregulated exploitation are usually done below the radar and is not captured in our economic development indices,” he said.
The minister further disclosed that his ministry had established a National Forestry Trust Fund, which is aimed at providing resources, complementary to government’s statutory allocation, for carrying out reforestation and sustainable management of the country’s forest estates, reserves and production landscapes.
Also, the Permanent Secretary of the ministry, Mrs. Ibukun Odusote, in an interview with journalists after she led hundreds of Nigerians for a road walk from Area 1 to Area 10 in Abuja, sensitised Nigerians to always replace any felled tree with at least three.
She said: “Indeed for us in tropical countries, especially for Nigeria which is blessed by abundant forests and natural resources that hitherto contributed significantly in sustaining our national economy until the discovery of oil, this year’s celebration provides an opportunity to remind us of the need to retrace our steps where we’ve been unkind to the quiet and pristine forests and its resources that have been our major natural means of life sustainable.”