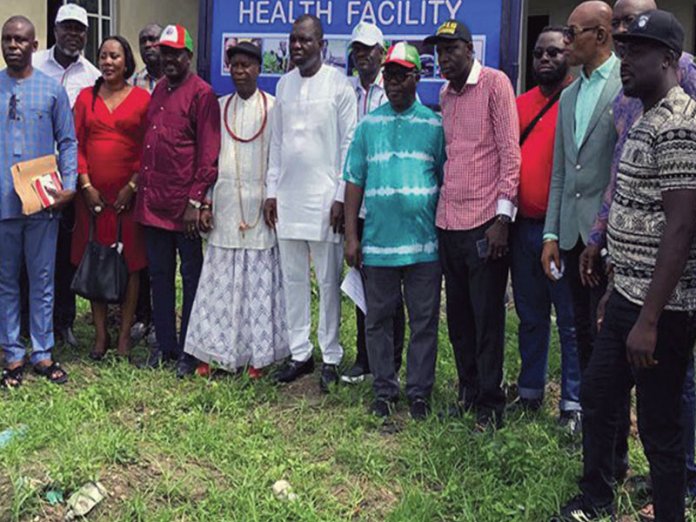 The handing over of the healthcare facility in Ode Itsekiri built by DESOPADEC to the Delta State Contributory Health Commission has brought a vista of hope to residents of the community, who for decades have craved for basic healthcare. Martins Ifijeh writes

If there is one riverine community in Nigeria that could pass as a government reserved area for its tranquility, quietness and up-to-date infrastructural facilities, it is Ode Itsekiri, a complete island in Delta State with huge human and capital resources.

It is the home to the Olu of Warri, ancestral home of the Itsekiris’ and could boast of relatively good roads laced with street lights powered by solar system. It is a mini-city housing not less than 40,000 people.

But despite having all the trappings of a community with basic amenities of life, it lacked one thing, access to good, qualitative and affordable healthcare, as it could only boast of a small health facility where the nurse, Mrs. Brown-Dibofun Rosemary passes as the doctor, matron, pharmacist, security guard and the cleaner. Simply put, the facility lacked all the features needed to address primary healthcare issues, including access to delivery, immunisation, among others.

While the people enjoyed the ambience the government, as well as illustrious sons and daughters of the community, may have prepared for them, they did not have a health centre they could run to in times of trouble.

It is in tackling this that the Delta State Oil Producing Areas Development Commission (DESOPADEC) built a cottage hospital for the community, which it hoped would help reduce maternal and child deaths, address medical emergencies, as well as aid in the administration of vaccines for children.

But there were two concerns; DESOPADEC does not run hospitals, and the people, especially the poor ones, would not be able to pay for healthcare services in the hospital.

In addressing these concerns, the Delta State Contributory Health Commission (DSCHC), as typical with one of its mandate to run cottage hospitals in hard to reach rural areas, and enroll residents of such communities in health insurance, took over the running of the Ode Itsekiri health facility, as well as offer health insurance to every member of the community in an elaborate ceremony that saw DESOPADEC handover the facility to DSCHC for effective running.
The move, which elicited cheers from members of the community, was referred to by the Chairman, Ode Itsekiri and the representative of the Olu of Warri, Chief Patrick Yalaju as the beginning of new things to come.

To him, no child will die again in Ode Itsekiri due to lack of proper treatment, and that no woman will be buried because of pregnancy or delivery issues, adding that even their men will no longer worry about ill health.

Speaking during the handover ceremony recently, the Director General, DSCHC, Dr. Ben Nkechika said the commission will not only help in running the hospital effectively, but will ensure every resident is enrolled in the state’s mandatory health insurance scheme, as they all deserve to walk into the facility to access healthcare services without paying out of pocket.

He said with the Access to Finance programme the state embarked on, supported by PharmAccess Foundation and Bank of Industry, the healthcare facility will be run by a private facility, emphasising that the state has put modalities in place to ensure such private facilities can run the centre as a world standard clinic.

He said: “All pregnant women, children of under five years and senior citizens above 65 years of age in Ode Itsekiri will enjoy automatic health insurance, while other members of the community will also enjoy same upon registration for a premium of N7, 000 for a whole year,” adding that members who were unable to pay for enrollment will also not be disenfranchised from benefitting, as the state’s equity fund covers for the poor.

Nkechika, who emphasised on the need for residents of Ode Itsekiri to be enrolled into the scheme, said the over 40,000 residents would benefit from it as registration into the scheme will commence immediately after commissioning of the health facility.

Nkechika, whose health insurance scheme presently has the largest number of enrollees in any mandatory scheme in the country with over 500, 000 enrollees as at January this year, recently commenced enrollment of residents of Egbema and Gbaramatu kingdoms with over 70,000 enrollees said to be added to those already enjoying benefits of the scheme.

He believes, by the time the 40,000 residents of Ode Itsekiri are fully enrolled, the number of those covered by the scheme would have increased significantly.

Nkechika said the team was determined to ensure every Deltan enjoys health insurance because the state Governor, Senator Ifeanyi Okowa has given a marching order that the obligation rendered to Egbema and Gbaramatu kingdoms be extended to all riverine communities in Delta State.

“Now we are done with Egbema, Gbaramatu and Ode Itsekiri communities, we will be heading to other riverine communities by next week to replicate same. It will continue like this until all riverine and hard to reach areas are covered,” he said.

Nkechika, who started his career with the exploration arm of Schlumberger, is a Harvard University and London School of Economics trained health specialist, with bias for development of rural healthcare. He said the commission plans to hit one million enrollees on or before December 2019.

Sharing his thoughts, Okowa said he understands the impact of quality healthcare services for the wellbeing of all Deltans especially those living in the riverine communities, adding that no individual in the state deserves to be left out of benefits of the dividends of democracy.

Okowa, who was represented by the Commissioner for Transport, Delta State, Vincent Uduaghan, said it was of utmost importance that people of Ode Itsekiri and others living in the riverine communities, feel the impact of government through infrastructure development and other benefits that ensures inclusion, peace and progress in these communities.

“DSCHC is one of the flagship programmes of this government designed to ensure accessible and affordable healthcare services for residents irrespective of their socioeconomic status and geographical location. The scheme currently has over 500, 000 enrollees and this facility will provide the residents of Ode Itsekiri and environs the benefits of the scheme.

“Delta State is fully committed to the overall welfare of all Deltans. The next four years of this government will be a guarantee for greater development of the riverine communities with several ongoing projects and those in the pipeline for execution,” he said.

On his part, the Managing Director, DESOPADEC, Olorogun Williams Makinde said it is one thing to build a health facility, but another thing to have it run by competent hands, adding that DSCHC will effectively run the facility and ensure every resident benefit from the state healthcare programmes.

He said in addition to the handover of the facility, DESOPADEC will also provide a boat ambulance for the hospital so that in times of emergency, the ambulance can pick patients from their homes to the hospital, as well as return them to their homes when the needs arise.