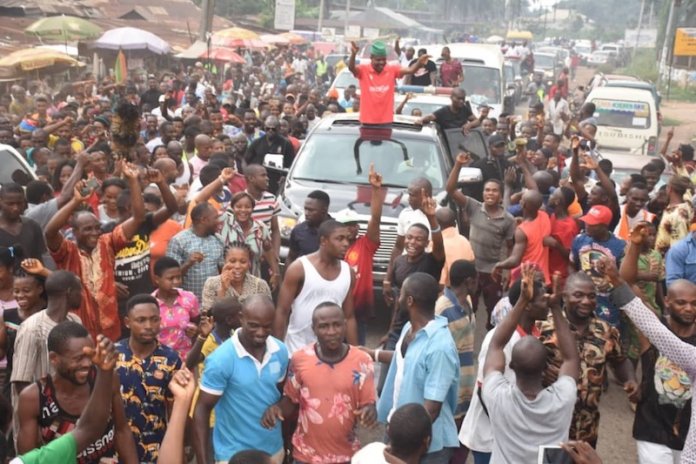 Many political pundits thought the 2019 governorship contest in Imo State will go the way of the previous elections. All the indications were there. The contestants were old war horses and very formidable, by all standards. It was not out of place, therefore, to predict that there may not be a clear-cut winner at the first ballot. Imo had established a pattern for re-run governorship elections since 2007. The tension and acrimony that usually follows this repeat ballot was not pleasant and the prevailing prayer was that an undisputed winner will emerge, this time.

Such was the issue in 2007 when Ikedi Ohakim of PPA then had a re-run against Martin Agbaso of APGA. Again in 2011, Ohakim having changed political party loyalty to PDP went for another re-run against Rochas Okorocha, then of APGA.

The election of 2015 which also was settled in a re-run involved the incoming governor of the state, Rt. Hon. Emeka Ihedioha of PDP and the outgoing governor, Chief Rochas Okorocha of APC.

The menace of Inconclusive elections comes with bitterness and rancor, which of course, the governorship election of Saturday, March 9 settled, once and for all.

To the entire Imolites, the election of Ihedioha as the governor-elect is the best thing that has happened to the people of the state, in recent times. In fact, to journalists, election monitors and observers that went round the nooks and crannies of the state adjudge the 2019 Imo Governorship/House of Assembly elections, it was the best since the advent of democracy in 1999.

It is on this premise, perhaps, that the jubilation across the state by ecstatic Imo people filled the air. The assumption is that peace and tranquility may have been restored in the state. For the first time, since 1999, this election brought the people of the state together, even the opposition parties were overwhelmed and had no complaint expect to congratulate the winner of the governorship election.

Granted that there were a few discordant tunes coming from the side of the outgoing governor and his son-in-law because they have some skeleton in their cupboard, such sentiments are not strange in politics. The fact remains that Imolites saw the opportunity to kick out government of ‘familiocracy, iberiberism’ and autocratic system of governance which had been in operation for the past eight years and they do not want an offshoot or ‘third term under any disguise’.

These two gentlemen are abreast of the contents of the Nigeria Constitution and the Electoral Act (as Amended) and as such did not make a mistake in announcing the winner in the person of Rt. Hon. Emeka Ihedioha who met the constitutional requirements to be declared governor-elect.

In a show of solidarity and expression of gratitude to God, the Imo State Advisory Council of Elders, a council made up astute gentlemen and ladies with diverse interests in all human endeavour such as retired legal luminaries, retired military and other security chiefs, former excellencies, former ministers, leading industrialists and frontline businessmen and retired politician, having found the 2019 governorship electoral process credible felicitated with Ihedioha on his historic victory in the keenly contested Imo State Governorship election.

The Council also congratulated Imo citizens for turning out to vote and defending their votes. The victory, according the group recorded at the polls represented the victory over impunity, mal-administration, liberation from servitude, poverty, deterioration of moral and societal values for which Imo state was not known for.

A congratulatory message signed by Prof. Francis Dike (SAN), Air Cmdr Luke Ochulor (Rtd), and Engr. Charles C. Ugwuh (former Minister of Industries) read in part, “This victory indeed amounts to a re-set for good governance, while we commend the INEC and the security agencies for their roles in ensuring a successful election in the State.

In the same vein, the Forum of Owerri zone former governorship candidates has commended President Muhammad Buhari, the Independent Electoral Commission (INEC), security agencies and all Imo citizens for a peaceful elections.

Spokesperson for the group, and former governorship candidate of Reform and Advancement Party (RAP), Mr. Kingdom Okere in an interview in Owerri thanked President Buhari for providing a level playing ground for a smooth governorship and House of Assembly elections in the state.

He also eulogized INEC in Imo State led by the Resident Electoral Commissioner (REC), Prof Francis Ezeonu, the State Returning Officer, Prof. Francis Otunta, Vice Chancellor of Michael Okpara University of Agriculture, Umudike and all the head of the security agencies and their officers and men for championing a credible and transparent elections.

Okere, however, commended Imo electorate for shunning desperation and greed politicians, whose interest was to continually put the state in a perpetual bondage, expressing confident in the governor-elect, Chief Emeka Ihedioha for having all it takes to rebuild the state.

The Deputy Governor of Imo State, Prince Eze Madumere, showing confident in the electoral process that produced Ihedioha as the governor-elect congratulated the winner of 2019 Imo governorship Election, describing it as victory for the people of the state.

His congratulatory message, “I heartily felicitate with you on your hard earned victory at the just concluded 2019 Imo governorship election. It is victory for Imo people and it is my victory and victory for many other patriotic Imolites who collectively made sacrifices to liberate the state from the hand of the oppressor and traducer of our people.”

In the same vein, Forum of 2019 Governorship Candidates of Political Parties in Imo State also threw their full weight behind the governor-elect, Chief Emeka Ihedioha, stating that the governorship election held on Saturday, May 9, 2019 was the freest, fairest, and credible election in the state.

They also endorsed the result of the election having witnessed and participated in the process and commended the electoral umpire, Independent National Electoral Commission (INEC) and security agencies to have midwifed a more transparent electoral process in the state.

The spokesperson of the group, Mr. Excel Nwaneri Ochiama of the Fresh Democratic Party noted that the winner of the governorship election, Ihedioha emerged through a transparent process which conformed with all constitutional requirements, the electoral Act (as Amended) and the INEC guidelines for the 2019 elections.

“To us, politics is not a do or die affair. It is a democratic game where a winner and a loser must certainly emerge at the end. What anybody who is genuinely desirous of ensuring a better Imo should do now, is to team up with governor-elect, Ihedioha and key into his vision for our state. Making scathing remarks or indulging in subterranean conducts to undermine the will of the Imo people freely expressed on March 9, 2019 is most unfortunate and anti-progressive.

“All candidates should jettison selfish interests and think of Imo first. Our state’s wellbeing is greater than any parochial interest. Aspiring for elective offices should be service-oriented and since Imo people have collectively reposed confidence in Chief Emeka Ihedioha to serve them, we ought to respect the people’s wish. No one can impose himself on the people because ‘nobody forces a servant on an unwilling master,” he stated.

The forum also implored Senator Samuel Anyanwu to desist from engaging in an actions which tend to cast aspersion on his integrity as a person, urging him to stop working in concert with some persons to undermine the will of Imo people which is clearly expressed in Ihedioha’s election as the governor-elect.

A prolific Nollywood actor, Chief Kanayo O. Kanayo said that the best thing that has happened to the people of the state was the rejection of Okorocha’s son-in-law, Uche Nwosu, while stressing that Ihedioha would remove the shameful past of the Okorocha administration.