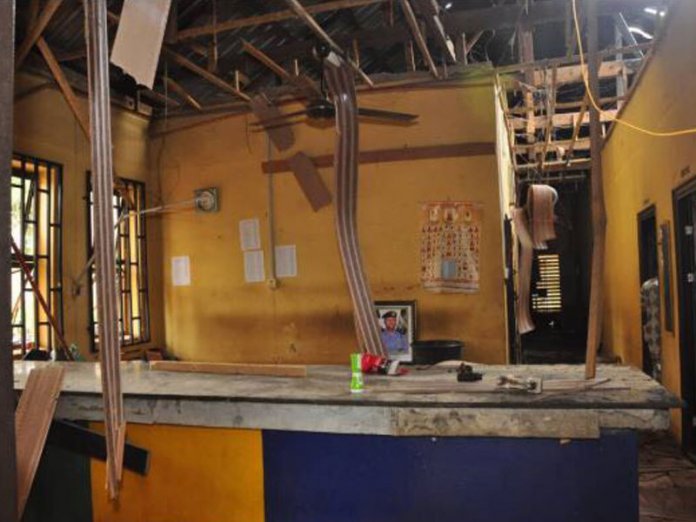 Tuesday, March 12, 2019 is a day the people of Afuze, headquarters of Owan East Local Government Area of Edo State will not forget in a hurry. On this day, some armed men stormed the police station in the area, killed four police officers, including a pregnant policewoman, leaving the entire town to sorrow, Adibe Emenyonu writes

Mrs. Ruth Ifijeh, is petty trader. She has been doing the business for more that 10 years where she sell her goods close to the police divisional headquarters situated at Afuze, the administrative headquarters of Owan East Local Government Council with ease. Apart from the bank robbery that occurred some time ago, there is nothing else to be afraid of in that sleepy community.

That was soon to change on Tuesday, March 12, at about 8pm when she was about closing for the day since it was already dark. Suddenly, she fled from her shop without locking up. Some gunmen had arrived and were shooting sporadically.

Narrating her experience, Mrs Ifijeh said: “It was a wonder beyond the imagination of everybody in the area. I thought that day was my last but God said no. The people I saw outside were four in number and they had opened fire immediately they arrived the police station. I ran and fell down. I lost my handset and other things, when I returned back to this place (shop) and I didn’t know if they were the ones who stole the items or other people.

“Even my store I didn’t lock the door; I sustained  wounds because I fell into the gutter. I have been here for about 10 years. This kind of thing has never happened in this place except for banks they  attack. The DPO was our father here; he was a very nice man to us, very good man. It was not up to one year the DPO came here.”

Another resident of Afuze town who witnessed the incident but refused his name in print, told THISDAY that the gunmen arrived the station with Improvised Explosive Device (IED), which they detonated before leaving the facility. He added that most of the vehicles parked at the station were destroyed

He said, “After the attack on the station where they killed the DPO, a pregnant policewoman and two others, the gunmen went to the office of the Independent National Electoral Commission (INEC) in the local government where they destroyed police vehicles parked at the premises”.

Godwin Ikpekhia, a resident of Afuze, said the incident occured at about 8:pm when many of the officers of the division had gone for outside duty.

“We only heard gunshots and nobody knew
what happened until in the morning when we discovered that the divisional police officer and three other officers who were on duty were killed on-the-spot inside the building. The hoodlums didn’t stop at that. They went to the INEC office and were shooting sporadically in order to attack those on duty. Election materials and police van at the INEC office were burnt down by the hoodlums,” he said.

Giving a vivid description of how the gunmen attacked the station,  another source in the area who preferred anonymity, disclosed that the gunmen on arrival into the town went straight to the late DPO’s house but did not meet him before they proceeded to the station where they locked all the four policemen in one room after killing them.

According to the source, “It took the discovery of one of the rescuers few minutes after the ugly attack to break open the door to discover to their shock the lifeless bodies of the policemen.”

Roll Call of the Dead

After the attack, the roll call of the dead revealed the identities of the four police officers who were murdered in cold blood by the hoodlums. Those killed were the Divisional Police Officer (DPO) in charge of the station, Tosimani Ojo (a Superintendent of Police); Sergeant Justina Aghomon (a pregnant policewoman); Inspector Sado Isaac, (DCO) and Corporal Glory David.

According to THISDAY investigation, trouble started when the police in Afuze arrested a member of a notorious gang and detained him in the cell. The suspect was said to contacted the leader of the gang who came to appeal to the DPO for bail.  He was said to have offered some money for bail but the DPO turned it down and requested for the case to be transfered to the state CID in Benin City, the state capital for further investigation .

Infuriated with the refusal, the leader of the gang directed his men who were outside to unleash mayhem on the police station which led to the killings of the four policemen on duty and the forceful release of their detained member.

Apart from the killing, two cars, a motorcycle within the police station and part of the station’s office complex as well as a police Hilux patrol van inside the office of the Independent National Electoral Commission (INEC) were torched by improvised explosive devices (IDEs) during the attack by the gunmen.

Swiftly, the state Governor, Mr Godwin Obaseki, condemned the attack and promised that the culprits will be arrested and made to face justice.  Obaseki who stated this when he visited the scene with the state Commissioner of Police,  Mr. Muhammed Danmallam, described the incident as the height of lawlessness.

“We have not gotten this lawless in Edo State, that people can go to the extent of attacking police officers at their station. I have ordered the release of all the resources required to apprehend and bring the culprits face-to-face with justice. Our hearts are with the families of the deceased and we will stand by them in these difficult moments. I have ordered the immediate refurbishment of the police facility for policing to continue in Afuze and environs,” the governor added.

Also in his reaction, Edo Commissioner of Police, Mr. Muhammed Danmallam said investigation would commence immediately, vowing that those responsible for the attack will be brought to book. He noted that urgent steps would be taken to curb the increasing cases of criminality in Owan axis of the state, adding that his men are working round the clock to apprehend the culprits, just as he called on citizens to assist the police with information and report suspicious activities in their neighbourhood to the police.

To match words with actions a joint team of security operatives including soldiers, anti-riot mobile policemen, officials of the Directorate of the State Service (DSS) and other agencies have been drafted to the area. Among the joint security outfits are regular policemen led by DPOs from various divisions in Edo North senatorial district and men of the Nigeria Security and Civil Defense Corps (NSCDC). Also deployed were hunters and vigilante groups within the council to trail the fleeing hoodlums.

A visit to the area yesterday by THISDAY showed the presence of the security operatives with over 10 patrol vans stationed outside the secretariat complex of the council. The officers in show of force had patrolled round Afuze town with a vow to arrest the perpetrators of the dastard act which left many families in pains and tears, as well as destruction of millions of naira worth properties, including the state police station and vehicles in the process.

Nevertheless, some residents of the area have lamented the increasing attacks by gunmen, who enter the community and escape mysteriously. According to them, the trend is becoming worrisome.

Their worry is not unfounded. On July 14 last year, a similar gruesome attack took place at a checkpoint near Uzeba-Aviosi junction along Ifon road, Sabongida Ora, headquarters of Owan West Local Government Area where four police officers were attacked at a check point in the area, killed and burnt inside their patrol hilux van.

Against this backdrop, THISDAY findings have revealed that the seeming night attack by hoodlums on policemen may not be unconnected with issues relating to drug cartels who make use of the Owan axis as their route to ferry hard drugs like cannabis, otherwise, known as Indian hemp, with activities linked to towns and communities from neighbouring Ondo state and adjoining areas.

More so, family members of the one of the deceased officers, late Inspector Sadoh Isaac have demanded for justice over the death of their bread winner.

Mr. Sadoh Louis, a 36 year old Lagos state based Civil Servant and second son of the late Inspector Sadoh told newsmen that his father was due for retirement in few years but had died in active service to his fatherland, the Afuze community and members of his family.

He described the father of seven as ‘a lion and tiger’ who remained fearless while in service, as an exceptional police officer who stood for justice, peace and love for both his family and all throughout his profession.

The secretary of Owan East council, Mr. Godwin Imoudu said the entire people of the council were mourning the sad event, describing the late DPO and others as a quintessential police officers who stood for peace and had worked tirelessly towards the peaceful coexistence of all segments of people of the council.

Particularly, Imoudu recalled that the late DPO (Tosimani Ojo), who was a member of the council’s peace and security committee, “was very neutral during the just concluded elections and had called a meeting of all stakeholders and politicians”, a feat he said boosted the peaceful polls in the area.

Meanwhile, the Edo Police Command, has arrested eight of the 10 suspected to have carried out the heinous crime. Of particular reference is the man said to have pulled the trigger that snuffed life out of the pregnant policewoman.