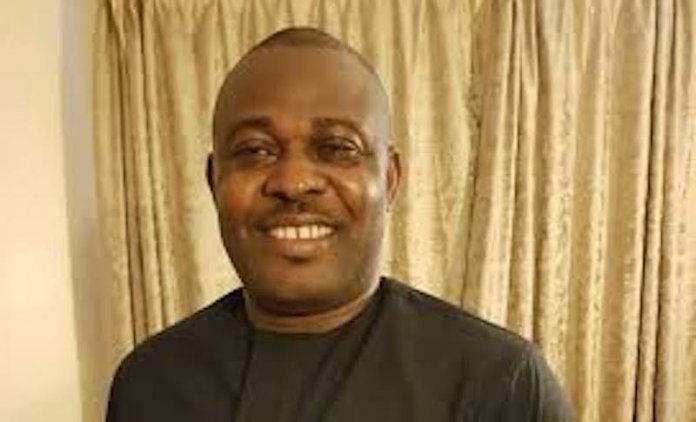 Irona stated this at a session with addressing stakeholders of Ohaji-Egbema-Oguta-Oru West Federal Constituency in Oguta after the announcement of the Peoples Democratic Party-PDP as winner of the just concluded governorship election in the state.

He also preached forgiveness and reconciliation of all, urging his supporters to forgive all those that may have offended them in anyway, assuring that he would reconcile all stakeholders in the area, irrespective of political and party affiliation.

The governor-elect said, “We must use ISOPADEC funds to develop our place. We shall end the practice of sharing of ISOPADEC funds. We shall take care of our women, youth and elderly. We will touch the lives of our people.

“Our brothers shall no longer be used as thugs. We shall not steal your money. If it is about money, we would not have won this election. We earned the confidence and trust of Imo people. We will ensure that the trust is sustained.”

“You must begin the process of reconciliation. No matter the political party anybody belongs to, I want to tell you that I will bring everybody under one roof. This is a task I have given to myself. I will start from my community, Local Government, Federal Constituency and of course Orlu zone.

“I will reconcile every reconcilable person or group. My people, out of benevolence, brought me from Councillorship, to Local Government as Chairman, then House of Assembly and House of Representatives. Today, I am Deputy Governor-elect. What has God not done for me? You will see a different Irona. We shall not let you down.”

Sharing his experience in opposition for over a decade in the state, Irona said, “We remained in the PDP; transformed PDP and conducted the best primaries ever in the history of Imo. We chased away all the criminals and sanitized the party….”

He commended his political leader, Senator Francis Arthur Nzeribe, pledging his continued loyalty “to the Arthur Nzeribe political dynasty. I am proud to come from this dynasty.

“Nobody will destroy this dynasty. He is the man that taught me not only how to do politics, but to manage my resources; a man with a forgiving heart; a political colossus, strategist and father of all.”

Irona, therefore, urged all those that left the Nzeribe political family “to return, assuring them of warm reception. I want to say it here that our brothers who, for certain circumstances decided to leave this family should return.

“I promise that I shall not oppress, harass or intimidate anyone with this position. I shall not take away anyone’s property from him/her. I promised you that all your efforts will be rewarded. It is also your duty to protect your own.

“The task is huge, but, with your support and prayers, we shall succeed. Don’t come to me to run anybody down. If you do it, you have lost my friendship.”