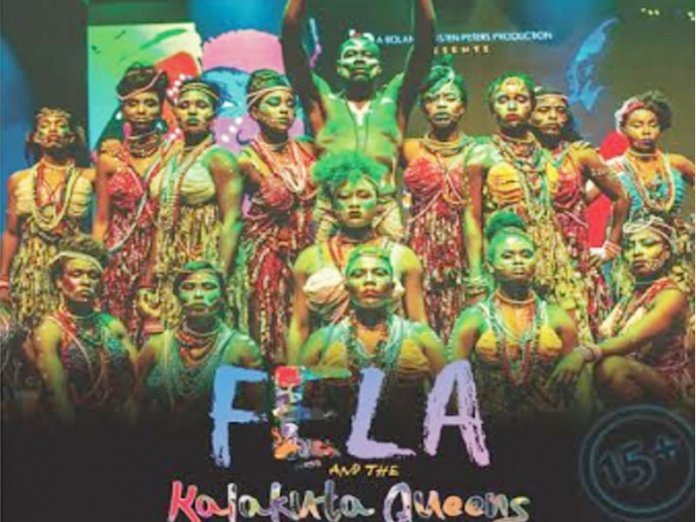 Bolanle Austen-Peters (BAP) Productions, blazing a trail in Nigerian theatre and musicals as it takes the world renowned story of Fela Kuti to the South African State Theatre. Fela and the Kalakuta Queens will be on the South Africa’s stage from 27th March until 7th April 2019. This comes after a successful premiere of the powerful musical production at the state-of-the-art Terra Kulture Arena in Victoria Island, Lagos, Nigeria.

According to the Director, Mrs. Bolanle Austen-Peters; “This is a phenomenal Development. It is gratifying to know that my production is the first ever musical from Nigeria to be showcased by the South African State Theatre. This is a validation that Nigerian theatre and musicals have come to stay. In line with the Federal Government’s desire to export non-oil products, theatre has emerged as one sector that is living up to that expectation. With over 60 people being taken to South Africa. This is indeed a new dawn.”

Speaking further, Austen-Peters said “Nigerians form a strong community in promoting Nigerian and African culture in notable cities around the globe. We believe that a historic and cultural production like Fela and the Kalakuta Queens will be received well in South Africa – considering Fela’s iconic status and the increasing interest in afrobeat internationally,” Peters reiterated.

Also commenting on the play, Artistic Director of the State Theatre, Aubrey Sekhabi comments; “We have a thriving community representing the diaspora in Pretoria and believe that this will bring them out for theatrical entertainment. While entertaining and spectacular, the story of Fela Kuti and the Kalakuta Queens is a timeless critique of post-independence Africa, with strong commentary about greed, corruption, abuse of power, underdevelopment and African leaders’ relationships with their former colonial masters. The message in the music was as relevant during Fela’s time as it is today.”

In line with the theatre’s Pan African outlook, the musical presented chronicles of the complicated life and times of the late legendary musician, Fela Anikulapo Kuti, also known as Fela Kuti, or simply Fela. From birth to life as a defiant and uncompromising social activist, a flamboyant musical maestro and his historic marriage to his 27 wives (known as the Queens), the story of Fela and his Kalakuta Queens is a compelling one, while at the same time deeply moving and emotionally engaging. It travels through the honest and selfless love the icon had with his dancers (Queens) who left their homes to follow him, believing in his vision of building a better community through arts and music.