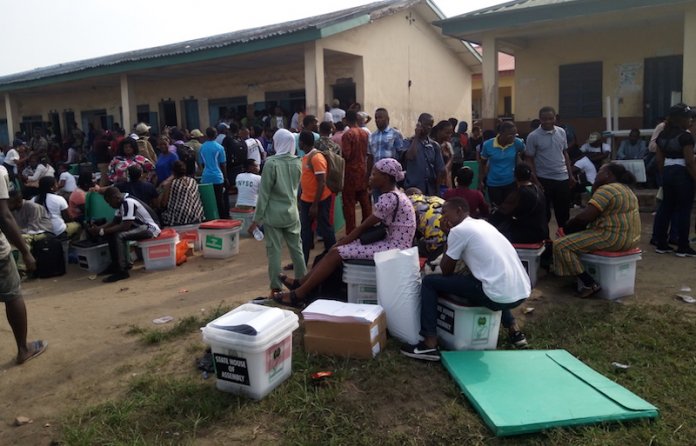 Scores of adhoc staff of the Independent National Electoral Commission (INEC) at Ojo and Iba Collation Centres in Lagos on Saturday staged a protest over unpaid allowances.

As at 9.30 a.m, the adhoc staff were seen chanting. “No Pay, No Work’’ at the collation centres, refusing to go and resume duty at the polling units in the area.

One of the ad-hoc staff who pleaded anonymity told the News Agency of Nigeria (NAN) that they will not resume duty until they get their allowances.

“We will not go to work if we do not receive our money here and now. They promised to pay us for the Presidential Election held on Feb. 13 immediately after the elections, but some of us got paid only yesterday March 8.

“The N10,000 allowance for the governorship election was supposed to be paid yesterday, but till now nothing.

“So, we will not go anywhere until we get our money,’’ he said.

An Electoral Observer at the collation centre, Mr Davis Faleye, decried the poor organisation by the Commission.

“INEC should have paid them their money so they can render their services to the government and for the election because I feel that their rights should not be undermined.

“If they are yet to leave the collation centre as at 9.30 a.m, I wonder when voting will start.

“I have called the commission and reported the situation, but nothing has been done,’’ Faleye said.

The News Agency of Nigeria (NAN) reports that in some of the polling units in the area, voters were on queues waiting for the INEC officials to cast their votes. (NAN)