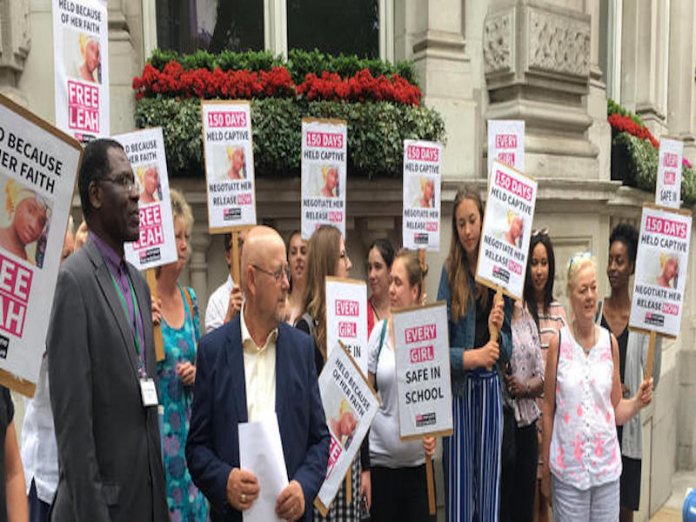 A group of protesters, led by former presidential aide, Mr. Reno Omokri, laid siege to the Nigerian High Commission in London yesterday to commemorate the first year of the incarceration by Boko Haram of Dapchi School girl, Leah Sharibu.

The protest, which the organisers said was to remind the world of the failure of the federal government to secure her release, was complemented by a query from the Bring Back Our Girls Group (BBOG) and Committee for the Defence of Human Rights (CDHR), questioning the silence of the Muhammadu Buhari administration over the school girl’s one year long captivity by the terror group.

The London protesters called Leah’s mother, Rubeccah, and empathised with her, telling her that they stood with her in her low moments.
The protest organised by Christian Support Worldwide (CSW) began in the early hours of the day, with the group’s Founder and Chief Executive, Mr. Mervyn Thomas, saying they would keep vigil at the commission’s premises.

The Chairperson of BBOG, Ms. Edith Yassin, in a telephone chat with THISDAY, in Abuja, maintained that there was really nothing much to commemorate.
According to her, “There’s really nothing much to commemorate about because of government’s silence on the matter. We didn’t make any arrangement to mark the kidnapping of the Dapchi schoolgirl, Leah Sharibu. Because of the elections, we didn’t know what the situation will be, so we just decided to leave.”

She added: “We can’t march now, because there are issues in the air. We didn’t really arrange anything because we feel the government is a bit jittery about the postponement of the elections.”
Yassin chided the federal government for waiting for the deadline before trying to rescue Sharibu and two other captive aid workers, Loksha and Liman, who were executed by the Islamic terrorist group.

She asked: “Why is the federal government silent, when will #Leah Sharibu, Alice Ngaddah, and the 112 #Chibok girls and all other abductees be free from the clutches of Boko Haram.
“Has government really ignored Leah Sharibu and other abducted girls?

Who will account for all the monies spent and, how long before government will realise that all lives matter?”
The group, while also calling for the return of the Internally Displaced Persons (IDPs) to their various homes, urged the federal government to ensure the security of its citizens.
On its part, CDHR called on the federal government to intensify efforts to negotiate the release of the Dapchi school girl, Leah.
According to a statement issued yesterday by the National President of CDHR, Malachy Ugwummadu, the group berated the government for the continued promises for the release of Leah without the corresponding efforts to practically effect her release.

Ugwummadu said the promise has become a cliché meant to satiate present electioneering demands.
“No doubt, the pains and anxieties of such hope against hope have become excruciating to members of her family.”
He also noted that President Buhari’s administration has been so preoccupied with the president’s re-election bid that only scant attention has been displayed to make efforts needed for Sharibu’s release, adding that repeated calls have been made by her parents, civil society organisations and concerned citizens for her immediate release.

He remarked that one year after, these calls for her release have become recurrent and sadly reminding them that their innocent daughter has added a year in the captivity of such a violent sect.

“Nigerians are enjoined to remain steadfast and focused on their demands for the immediate release of Leah and other captives, regardless of the present election demands. The primary purpose of every government in keeping with Section 14(2) b of the Constitution of the Federal Republic of Nigeria 1999 (as amended) is the welfare and security of lives and property.

Thus, if the lives, including that of Leah, for which government all over the world exists in the first place would be destroyed, then for what purpose will the government of Nigeria serve when constituted after election? We should hearken to the cry of a distressed mother and remain resolute and focused on rescuing Leah Sharibu and others in captivity.”