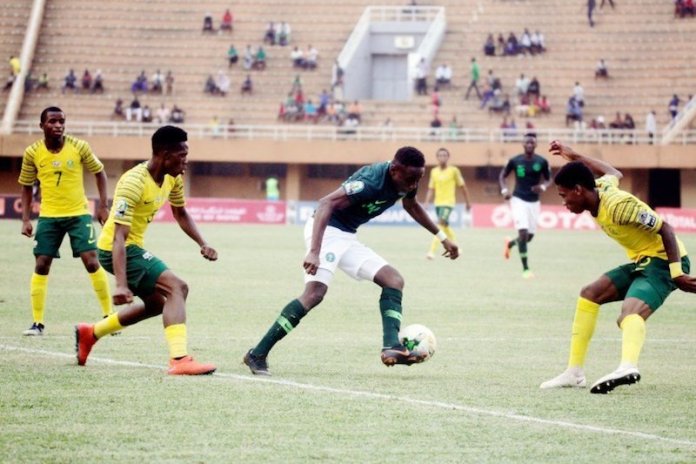 Once more, penalties proved the undoing of Paul Aigbogun’s Nigeria U20 squad as South Africa’s Amajita picked up the bronze medal of the 2019 Africa U20 Cup of Nations in Niamey yesterday.

Failure to put away a number of opportunities that came their way proved fatal for the seven –time champions, who endured the humiliation of finishing outside the medals’ range at the tournament for the first time.

Peter Eletu, who was starting for the first time as the Nigerian camp tried to lift the morale of the boys following Wednesday’s penalty shoot-out defeat to Mali in the semi finals, fluffed what was a good opportunity in the 32nd minute when the ball fell invitingly to him just outside the Amajita’s eighteen –yard box during an onslaught. He instead hooked the ball listlessly over the bar.

The unflattering features of poor passes, aimless shots and pathetic lack of marksmanship that saw the Flying Eagles end up with the wrong end of the stick on Wednesday were again in full flow, and the encounter was a stinging reminder of the fact that Aigbogun and his assistants have to re-jig the squad before the World Cup finals in Poland in three month’s time.

Alhassan Adamu, who scored the goal against host nation Niger Republic that made the Flying Eagles finish at the top of Group A and earn a place at the World Cup, fluffed Nigeria’s first kick in the shoot –out, following a dismal show by both teams in regulation time.

South Africa scored all their kicks to earn the bragging rights after both teams finished their Group A clash scoreless on Matchday 2.

Today, the impressive Lionceau du Teranga of Senegal will lock horns with Mali’s Junior Eagles in the final match of the championship.