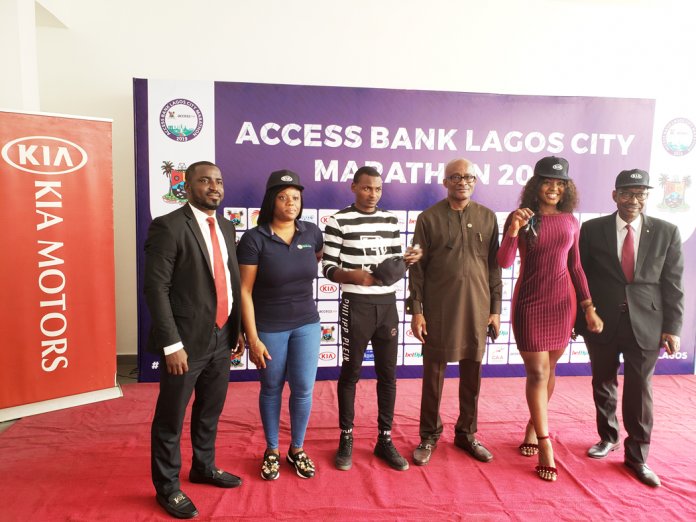 The two Nigerian runners, who were the first to cross the first 10 kilometres line of the 42-kilometre Access Bank Lagos City Marathon, have been presented with 2018 Rio cars by Kia Motors Nigeria.

This is the maiden year for Kia Motors, as the automobile partner of the marathon. The 2019 Kia Sportage led the race as the clock cars and the project vehicles for the race while the all-new 2018 Kia Rio models were slated as prizes for winners of the 10-kilometre fun race.

The elated winners, Hart Priscilla, who lives in Port Harcourt and Abdulateef Olufunmi, in Lagos, received the keys of the new Kia Rio, which the company officials said is worth N8.1 million each.

Hart, a final year Electrical Engineering student at Rivers State University, Port Harcourt, said she is a fitness model, and a personal trainer. “I run like 10 to 15 kilometers three times a week and I’ve been doing so consistently for a year now.”

Olufunmi is a footballer who also sells solar panels and accessories with ultimate desire to join one of the clubs in Europe.

Presenting the Rio keys, Vice President, Kia Motors Nigeria, Mr. Olu Tikolo said the brand has fulfilled its promise, drawing a parallel between the race and Kia. “Marathon is a test of endurance and reliability which is exactly what Kia is about. Kia cars are very durable, they are reliable and their endurance levels are high and that is why we can afford to give five-year warranty on these cars.”

Tikolo said on the development side, “We are talking about youth development, and economic development. Kia is known for sports development all over the world. Kia is associated even with the World Cup, the Australia Opens and others.”

Head of Events and Sponsorship, Access Bank Plc, Oge Nwachukwu said, “We cannot underestimate the success and impact the race as brought upon the country and the financial institution.”

The Lagos City Marathon, now in its Bronze stage, aiming for Silver, is one of the most renowned marathons in Africa with over 400 professional athletes across the globe running in the race. In recent years, it has become the best-known marathon in Nigeria and one of the fastest growing in the world.