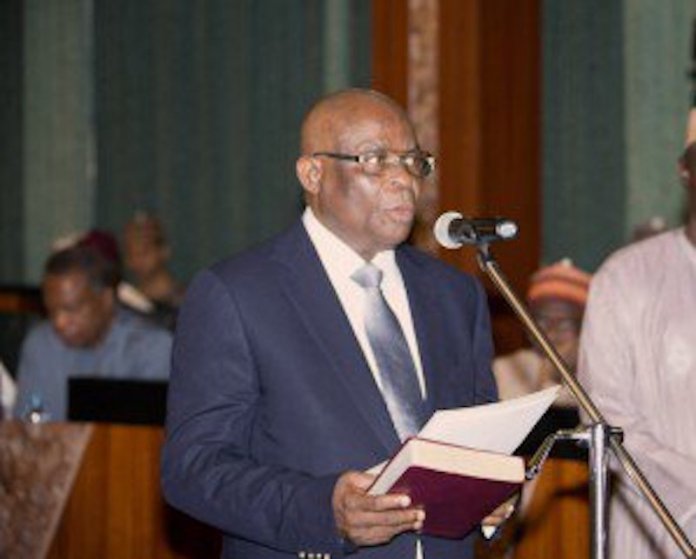 The suspended Chief Justice of Nigeria, Justice Walter Onnoghen, who arrived the premises of the Code of Conduct Tribunal on Friday morning, has entered the court room.

He walked into the courtroom at exactly 10.20am led by his lawyers, Chris Uche, Ogwu Onoja, Paul Eroko, Lawal Rabana, Chukwma Machuku-Umeh and Goddy Uche, all senior advocates.

The suspended CJN who arrived the CCT at about 9.40am sat in his vehicle for several minutes before he walked into the courtroom.

Shortly after, members of the CTT led by the Chairman, Danladi Umar, entered the courtroom and took their seats.

Proceedings began at exactly 10.33am after Umar’s apologies for coming late.

There after, Onnoghen entered the dock to take his plea. The tribunal chairman however refused plea by Onnoghen’s counsel that the suspended CJN’s motion be taken first.

The Tribunal however set aside the bench warrant issued at its last sitting for the arrest of Onnoghen.
The order was sequel to an application moved by Onnoghen’s lead counsel, Chris Uche.
Uche had asked the Tribunal to vacate the order requesting the police and DSS to arrest Onnoghen since he had made himself available to the Tribunal.
Onnoghen pleaded not guilty to all 6 counts charge read against him.
Following his not guilty plea, his lawyer asked that Onnoghen be granted bail on self recognizance.
The Tribunal accordingly granted the bail to Onnoghen on self recognizance as prayed by his counsel.
Onnoghen’s counsel has just moved for an adjournment of the trial till after the elections for the hearing of all pending applications.
However, counsel to the Federal government represented by Ibrahim Musa did not oppose the application.

CCT adjourns till March 11 for hearing of all pending applications.