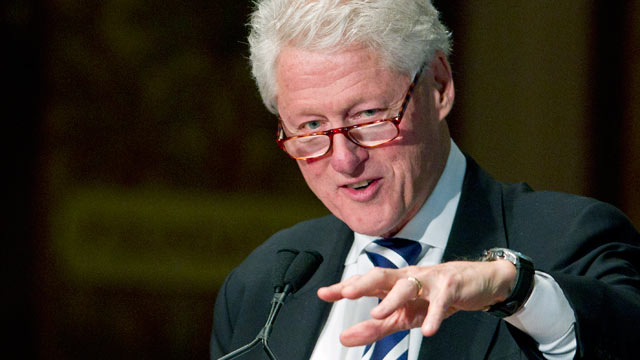 The spokesman of the Peoples Democratic Party (PDP) presidential candidate, Atiku Abubakar, Mr. Paul Ibe, has blamed the All Progressives Congress (APC) for the cancellation of the visit of the former United States President, Bill Clinton, to Nigeria.

Clinton was expected to attend the signing of a peace accord between President Muhammadu Buhari and Atiku today.

The National Peace Committee (NPC) had put the programme together ahead of the elections.

But Clinton pulled out, saying he did not want his visit to be politicised.

Reacting in a statement, Ibe alleged that the cancellation was not unconnected with the utterances of some members of the ruling party.

The spokesman, according to The Cable, said he wished the situation on ground were more ideal.

Ibe, who said the APC had always harassed the opposition, said the ruling party has now taken it a notch higher by threatening diplomats and election observers.

“It is with some disappointment that we note the statement from President Clinton expressing his inability to visit Nigeria because of recent ‘conversations’ that have made the intended visit inexpedient,” the statement read.

“We understand the reasons given by President Clinton and wish the situation on the ground were more ideal as to make his visit more conducive.

“We note that the candidate of the PDP, Atiku, a man with a history and pattern of peaceful democratic activity, had looked forward to President Clinton’s visit.

“We quite understand the reasons given by President Clinton, coming especially after the unfortunate “body bag” comment emanating from the All Progressives Congress (APC).

“Be that as it may, Atiku wishes to reaffirm to Nigerians and the world, his commitment to peace and democracy and urges all contestants and parties involved in the 2019 Nigerian elections to publicly do the same.”

Ibe appealed to Nigerians not to be discouraged by the conduct of politicians but turn out en masse and vote their conscience.

“Atiku urges all Nigerians to peacefully troop out in their numbers to vote according to their conscience and dictates. A large voter turnout makes it even more difficult, and perhaps impossible to rig elections,” the statement read.

“Atiku also notes the harassment of friends of Nigeria by the Buhari administration and its agents and privies, who have taken to releasing and uttering statements threatening diplomats and election observers.

“We wish to make known to these individuals the fact that Nigeria has long-standing friends and it will be myopic to burn those bridges on the altar of desperation.

“Finally, we urge President Muhammadu Buhari to place the interest of Nigeria above partisanship and call these antagonists to order.”