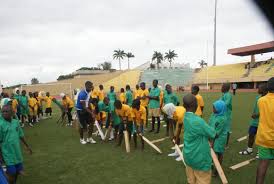 The International Cricket Council has confirmed that game’s World Cup trophy would arrive Abuja, Nigeria at noon today to begin a three-day Tour of the country as part of the build up to the 2019 World Cup.

Nigeria despite not being eligible to participate in the World Cup in the United Kingdom later in June, has been picked as one of the countries that the World Cup would visit, in recognition of her growing interest in the game.

President of the Nigeria Cricket Federation, Professor Yahaha Ukwenya, who was elected the head of the body in June 2017, said he and his team could not have thought about this 18 months back, when they assumed leadership,

“I believe we have communicated to the world, how passionate our team is, in several ways, and, how ready we are to grow the game in these few months that we have run Cricket as a new board, that was what earned us this,” he said.

The trophy would be hosted in Abuja and Lagos. While in Abuja, it will be received by the Honourable Minister of Youth and Sports Development, Solomon Dalung,  and visit some iconic places like the Shehu Musa Yar’ Adua Cultural Centre and the Katampe hills; in  Lagos, it will be received by Lagos State Governor, Mr Akinwunmi Ambode and also displayed at the Tafawa  Balewa Cricket Oval on Lagos Island.

“The tour of the World Cup Trophy is presently the biggest activity in the game of cricket, the world over, and Nigeria has been placed on that map by sheer effort of the dedicated people that make up the leadership of the Nigeria Cricket Federation.

This is the first time the World Cup Trophy is coming to this part of Africa. It is indeed an honour,” the NCF Vice President, Uyi Akpata, said.

“We have a lot people in the cricket community that have been yearning to have a taste of World Cup Trophy and we are working out a very fair ground that would be inclusive for all the groups represented in our diverse community in Nigeria, both students, diplomatic community, professionals, enthusiast and sports fans,” he added.

The effort of the new board of the Nigeria Cricket Federation in 18 months has seen  Nigeria move from division 2 to division 1 in the under-19 category and the unranked Women’s national team has been ranked 36th in World T-20 International.

The NCF also kicked off a grassroots development programme where over 3,000 kids have been reached in 2018, with double that figure being targeted for 2019.

Most recently, the ICC, also partnered the NCF in a three-day Commercial Strategy and Development Workshop, delivered by the renowned CSM Sports consultants for Middle-East and Africa.  The workshop was targeted to rejig, review and re-assess the Federation’s 4 years strategic development goals, in which the team was already ticking some right boxes.

The World Cup trophy would depart Nigeria on Wednesday, February 13, 2019.