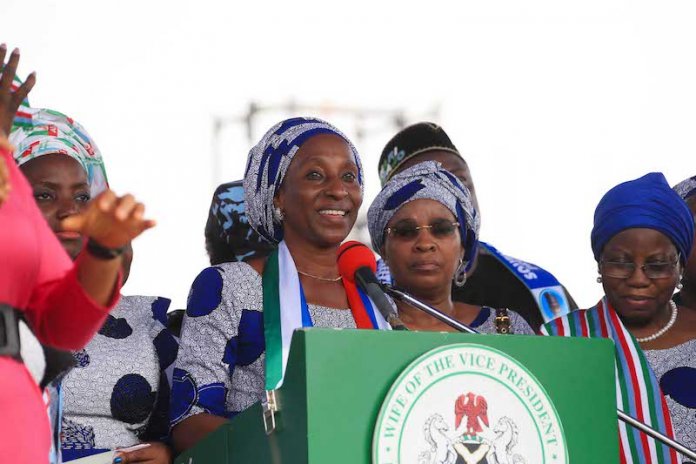 Ahead of the 2019 general election, wife of President, Muhammadu Buhari, Aisha, on Tuesday in Port Harcourt, called on the South-South youths to shun all temptations to be used to perpetrate election violence and to ensure their votes were counted at the polling units.

Aisha, made the appeal at the South-South Women and Youth presidential campaign organised by the foundation for female empowerment in collaboration with the Coalition of Female Founders and Leaders of NGOs, CBOs, CSOs and FBOs in the Niger Delta region.

Buhari’s wife, represented by wife of the Vice President, Mrs. Dolapo Osinbajo, noted that the administration of President Buhari was interested in women and youth, adding, “that was why the government engaged more in the home grown school feeding programmes, N-Power programmes, among others.”

According to her, “The present administration is also helping in small loans for business owners as they are putting together policies to ensure the ease of doing business in the country.”

She said, “That is why the APC government is working day and night for the development of Nigeria. I want you to talk to 5 to 10 people to vote for APC.”

She however, urged the youths to come massively to cast their votes for the All Progressive Congress (APC) as the party was ready to carry them along.

“Ensure you come out on election day, do not sleep at home as your vote matters,” she said.

Mrs. Amaechi stated that the president’s achievements were too numerous to mention, adding that, “in the past, these are some of the things that we begged for.

“I see a government that has structure and focus in place to deliver his people and wants to make a difference. We know Buhari can give us the security we want in the South-South

“We are here to see how women can be placed in positions and how youth can have a say in the society,” Amaechi said.