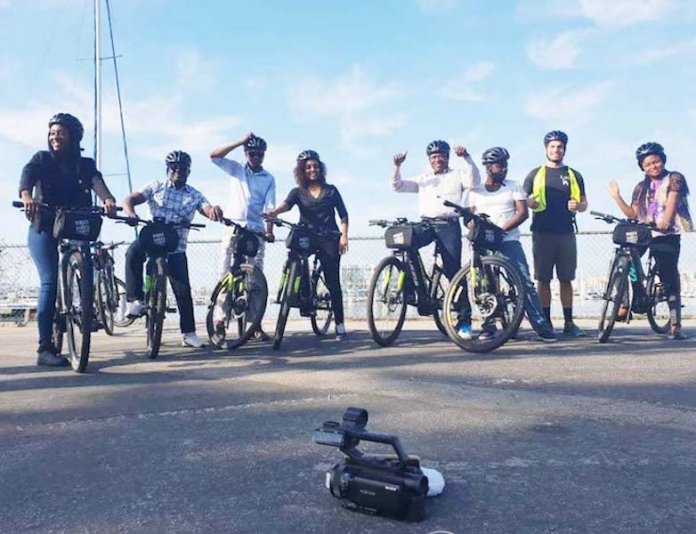 Chinedu Eze, who was among a select group of Nigerian journalists on a visit to the United States, writes about his experience of the eighth most populous city in the country

What comes to mind when one is in Los Angeles is that ingenuity and creativity are the keys to building business and making money. Thinkers transform societies to money making machines. They build facilities and beckon at the world. And the world responds. This is why the city of Los Angeles attracts millions of people from all over the world every year.

Neither Los Angeles nor the United States inherited the Pyramids of Giza and the Sphinx in Egypt, the Catacombs in Rome nor Jesus’ tomb. What is in Los Angeles and in most parts of the US are modern creations that have become attractions to the rest of the world.

The trip to Los Angeles was arranged by Ethiopian Airlines, which airlifted journalists to the iconic US city on its maiden flight from Lome, Togo, thus connecting West Africa to California.

The General Manager of Ethiopia Airlines in Nigeria, Firiehwot Mekonnen, explained to the journalists on the trip that this new air service is part of Ethiopian Airlines’ plan to connect more African countries to the United States of America and the rest of the world.

Los Angeles, no doubt, is one of the most visited cities across the world because of its temperate climate; that even at the height of winter, the temperature remains moderate, a little colder than Lagos weather during the rainy season.

It was also the birthplace of the iconic Marilyn Monroe. Monroe became one of the biggest movie stars of the 1950s and early 1960s, only to have her life cut short at age 36.

The landmark Hollywood Roosevelt Hotel was Monroe’s home for two years, just as her modelling career began to take off. Monroe was staying in one of the vintage 1950s Cabanas at the time of her first professional magazine shoot, which took place at the Roosevelt’s pool.

Elvis Presley, the King of Rock and Roll has his legacy throughout Los Angeles, from a historic recording studio to his favourite restaurants, hotels, and even a spiritual sanctuary near the Pacific Ocean.

Upon arrival at the beautiful Los Angeles International Airport, (LAX), we were welcomed by the team from the Los Angeles Tourism and Convention Board and representative of Ethiopian airlines.

The company’s Senior Director, Stephanie Nakasone, said the airport is being modernised and expanded to take in more travellers, as it was projected that the facility expects huge increase in passenger upsurge in the nearest future.

As the largest and busiest international airport on the US West Coast, LAX is a major international gateway to the United States, and also serves as a connection point for some passengers travelling internationally.

Nakasone said the airport holds the record for the world’s busiest origin and destination airport, since relative to other airports; many more travellers begin or end their trips in Los Angeles than use it as a connection. It is also the only airport to rank among the top five US airports for both passenger and cargo traffic.

The amenities at the airport should point the way to other contemporary international airports across the world.

Some of the innovations at the airport include dining and retail options, expanded ticketing area, VIP lounges, automated passport control kiosks, walkway connector, automated screening lanes and biometric e-gates, to mention a few.

After the seamless immigration process, the group of 10 set out for the Hilton Hotel where we lodged. You can only imagine how the ride was from the airport. The good roads and lovely buildings around while we drove to the hotel took our attention away from how far or close the airport was to the hotel.

We went for a bicycle tour of Venice with a company known as Bikes and Hikes LA. It was an amazing time touring the streets of LA on a bicycle and what was noticeable was that paths were designated for bicycle movement so the rider is protected from traffic.

We visited many locations, including Venice, which was an attempt to recreate Italy’s historical city. Venice is a beachfront neighbourhood on the Westside Los Angeles. Venice was founded in 1905 as a seaside resort town. It was an independent city until 1926, when it merged with Los Angeles.

Today, Venice is known for its canals, beaches, and the circus-like Ocean Front Walk, a two-and-a-half-mile pedestrian-only promenade that features performers, mystics, artists and vendors.

We attended a well-known comedy and magic club, where popular comedians put a lot of laughter on the face of the spectators, our group inclusive; though due to time difference, most of us, weary and exhausted, interspersed laugher with sleep.

However, it was a memorable comedy show at the club, located at the Hermosa Beach. The club’s beachside location has long made it a favourite destination for comedians and audience members alike. Many of the top comics in the industry have and continued to call this their home club. Jay Leno, Arsenio hall, Gabriel Iglesias and others are regular performers.

The interior of the club serves as a museum, housing comedy memorabilia from Charlie Chaplin, Lucille Ball, Robin Williams, Ray Romano and more on display. The club is open Tuesday through Sunday and also prides itself on being a fundraising force in the local community.

It was a rendezvous for people with passion for arts and culture. It was this passion that drove some renowned names in the US to invest so much to make the centre one that would be admired by the world.

The Walt Disney Concert Hall was designed by Frank Gehry. It opened on October 24, 2003. The facility seats 2,265 people and serves, among other purposes, as the home of the Los Angeles Philharmonic orchestra and the Los Angeles Master Chorale.

We were told by our guide that Lillian Disney made an initial gift of $50 million in 1987 to build a performance venue as a gift to the people of Los Angeles and a tribute to Walt Disney’s devotion to the arts and to the city.

The Arts District tour was led by renowned curator and Los Angeles Arts District expert, Cindy Schwarzstein. The two-hour walking tour with Cartwheel Art offered an insider’s look at the history of the neighbourhood as well as the bars, cafes, shops, galleries, breweries and distilleries at the centre of this district’s vibrant core.

That evening we ended up at the most nostalgic Grammy Museum, where well-known US artists are captured on canvass and other platforms.

The only African very noticeable in the museum was Angelique Kidgo, the Beninese singer-songwriter and actress who adorned Ankara in her award winning performance that earned her a place in the museum. Ray Charles, Michael Jackson and all US great artists of yore were also housed in the museum.

The museum pays tribute to music’s rich cultural history. It explores and celebrates the enduring legacies of all forms of music, the creative process, the art and technology of the recording process, and the history of the premier recognition of excellence in recorded music – the GRAMMY Award.

The current exhibit spotlights GRAMMY-nominated artist Katy Perry and how she transformed music and fashion.

The drive to Universal Studios Hollywood was a mixture of adventure, excitement and curiosity. We dwelt on the thoughts of the gifted minds that created the spectacular studios, artworks and tech machines of Hollywood.

We were taken to the “underground” where all the high tech equipment and facilities for filmmaking are located. Filled with excitement at the breath-taking scenarios, we were enthralled by surprises as technology and human mind gave birth to unimaginable contraptions that shape the movies we watch every day.

We were no less excited by other activities such as the rides and tours, especially the Wizarding World of Harry Potter, which petrified some of us.

With the ride being in the dark with bursts of low light throughout and with silhouette of horrifying images plus the sudden jolts, stops and slow movement, it was frightful, exciting and exhilarating. But that is the thrill that makes both young and old troop and share the experience. There were scary dinosaurs, witches, dragons and many others appearing out of darkness, enough to scare even septuagenarians.

We watched the basketball game between two of the most exciting teams in the NBA, the Los Angeles Clippers and Dallas Mavericks at Staples the Center.

The Staples Center was where Michael Jackson was practising for a world tour before he died and where he was laid for the public at his death. The facility is a multi-purpose arena in Downtown Los Angeles. It is located next to the Los Angeles Convention Centre complex along Figueroa Street.

Reports indicate that Hollywood was established in 1853, with a single adobe hut on land outside Los Angeles. Growing crops was so successful there that by 1870, Hollywood became a thriving agricultural community.

Before Hollywood became an entertainment rendezvous, New York and Chicago were the centres of early film studios because that was where the actors were.

But when it came time to shoot on-location (namely westerns and Bible-pictures), the near constant warm temperatures and sunshine made Los Angeles a much better location. And then the actors moved to where the jobs were.

It is said that perhaps no other place on earth evokes the same air of show-business magic and glamour than Hollywood. The legend of Hollywood began in the early 20th century and is an earmark of modern American society rich in history and innovation.

The origin of movies and motion pictures began in the late 1800’s, with the invention of “motion toys” designed to trick the eye into seeing an illusion of motion from a display of still frames in quick succession.

In 1872, Edward Muybridge created the first true “motion picture” by placing twelve cameras on a racetrack and rigging the cameras to capture shots in quick sequence as a horse crossed in front of their lenses.

Djokovic Given No Assurance of Medical Exemption, Says Aussie Lawyers