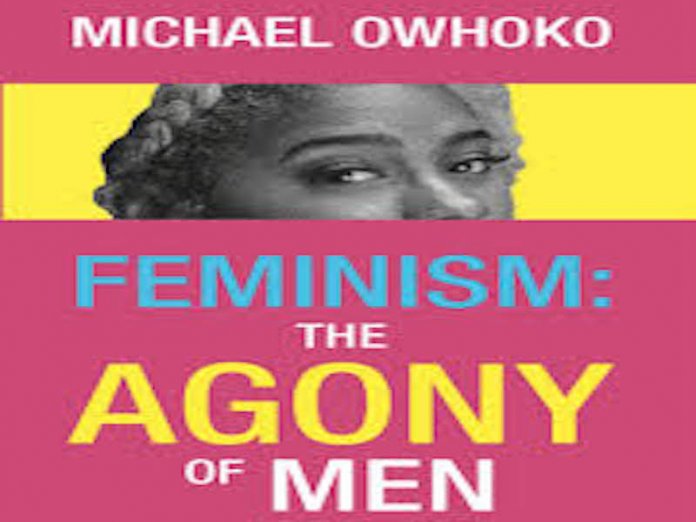 A Nigerian author Michael Owhoko has argued that the agony men endure in marriages has been traced to the philosophy behind feminism, the propelling force that has altered the mindset of woman who sees herself as equal partner in marriage, resulting in agitation for equal rights, opportunity and authority with men.

Whether his views are well-founded or not, they represent the views of a lot of men who see more harm than good in feminism. As contained in a new book published in the United States of America, disgruntled men are groaning silently in pains under them, subordinating their authority as head of the family to the woman with the ultimate aim of achieving peace without result, prompting many men to cooperate with their wives, and in the process, unwittingly subvert natural role responsibilities.

The book is entitled, Feminism: The Agony of Men was published by WestBow Press, a Division of Thomas Nelson and Zondervan, and has been formally released to the public. It is available in major bookstores worldwide.
“Until the philosophy behind feminism is curbed, men will continue to experience pains under cold relationships that will eventually lead to the collapse of their marriages. Feminism: The Agony of Men is an exposition of the silent pains men go through in marriages induced by feminism and the need for restraint, allowing natural order to prevail,” Owhoko disclosed in the new book.

The author asserts that the advocacy of the World Conference on Women, which encourages women to defend and fight for their rights in relation to equality with men are unwittingly setting the tone for tension and, by extension, conflict between the woman and her spouse, saying the growing band of single parenthood resulting from broken marriages is abysmal and should be of concern to the World Conference on Women.

Owhoko further revealed in the book that the feminist propaganda is part of a worldwide phenomenon playing out in homes, corporate organisations, societies, and marriages, apparently designed to dispute and diminish the super-ordinate position of the man, provoking an illusion of equal authority with him. “Unfortunately, this is the fire behind the inexplicable suspicion, rivalry, competition, ego, and animosity between the man and the woman, resulting in unstable marriages and relationships,” the author disclosed.
The book targets couples, and young male children on what awaits them in their marital lives and how to adapt to the realities in order to make the union compatible and pleasurable.

Owhoko is a journalist, author, media and public relations practitioner who has mostly worked in the banking, oil and gas, and media industries where he held senior and management positions. He earned degrees in political science and mass communications and is the publisher of Media Issues, an online newspaper . He’s also the author of The Language of Oil & Gas; Career Frustration in the Workplace; Nigeria on the Precipice: Issues, Options and Solutions; and The Future of Nigeria.