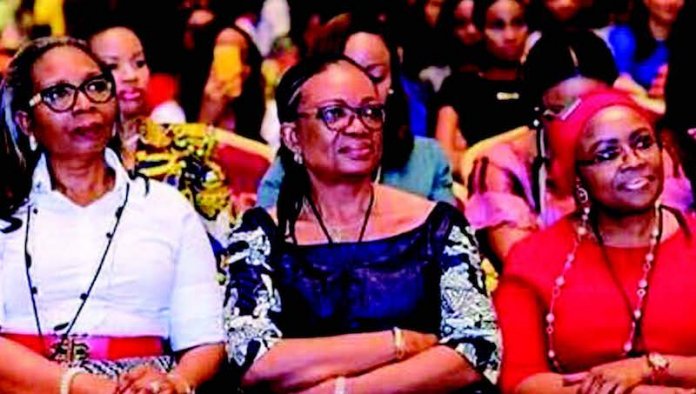 Power and acclaim, fancy titles and luxury make bitches of grown men. Many a grown woman suffers such pitiful transformation too, from modesty to monstrosity. Indeed the frills of affluence and kicks of fancy title have caused too many women to mutate into flamboyant monsters prowling the corridors of high society. Be it as wives of prominent politicians and powerful industry titans, too many women have turned brutes, simply because money and power accord them such luxury. But the three top bankers calling the shots at 3 of Nigeria’s biggest banks – Osaretin Demuren Head of The Board – Guaranty Trust Bank, Mosunmola Belo – Olusoga Chairman, Access Bank & Ibukun Awosika Chairman, First Bank, are remarkably different.

They respectively cut brilliant portraits of genius and modesty. Unlike too many of their male and female counterparts in positions of power in the banking sector and other industries, they are never haughty or guilty of false modesty. They are no painted faces, chained to false personas by a common yearning to exploit and defraud. Neither do they play pretend in a dark industrial Ponzi scheme in which all the characters are frauds.

Mosunmola, Ibukun and Osaretin rather epitomise the finest of Nigeria’s league of extraordinary leading ladies. Findings revealed that their unparalleled exploits in the finance sector led to their rapid, steady ascent the corporate ladder in an industry erstwhile dominated by men. The fact that each woman presides and calls the shots atop three of Nigeria’s most successful business enterprises, confirms their brilliance and inspiring exploits in the nation’s banking industry, according to pundits.

They affect a cultured, modest professional work ethic thus they are not given to frivolities or extravagance of any kind. They do not dress obscenely neither are they obsessed with vulgar and expensive jewelry. They are very simple in outlook and character and their banks are doing pretty well.
Left to them, anyone who considers his or her occupation, merely a means of earning money degrades it; the alpha women see in their calling, a service to mankind thus they persistently seek to ennoble their office and their work.

Cloaked in swathes of moral and pleasant punch lines masqueraded as sardonic humour, the three women flaunt that rare spark and spiritedness that most women of their ilk suffer a dearth of.
This can hardly be said of their peers, many of whom are fixated with material pursuits and other worldly vanities. They desperately seek to live like rock stars and emperors. They acquire the finest and most expensive cars, houses, trophy wives, toy boys and so on.