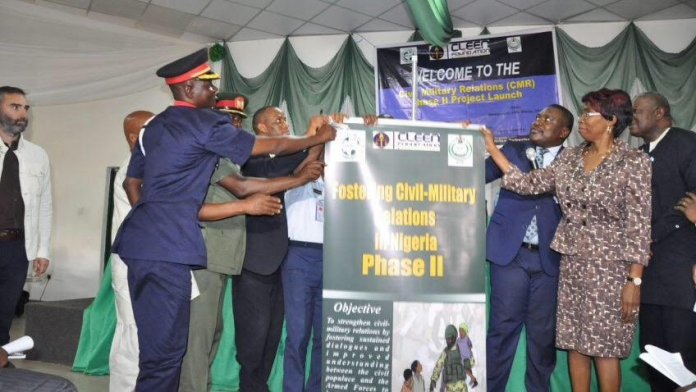 Chiemelie Ezeobi writes that CLEEN Foundation in collaboration with the National Human Rights Commission and the Institute for Peace and Conflict Resolution, recently organised a forum to foster civil-military relations

In collaboration with the National Human Rights Commission and the Institute for Peace and Conflict Resolution (IPCR), the CLEEN Foundation recently held an accountability forum on civil-military relations in Aba, Abia State.

Established in 1998, The CLEEN Foundation, is a non-governmental organisation with the mission to promote public safety, security and accessible justice through empirical research, legislative advocacy, demonstration programmes and publications, in partnership with government and civil society and the private sector.

In his speech, Executive Director, CLEEN Foundation, Mr. Benson Olugbuo, said they work in a wide array of programs including on election security with law enforcement agencies and other key stakeholders.

He said: “We are delighted and honoured to have such distinguished guests including security agencies respond to our invitationfor this forum. The Accountability Forum on Civil Military Relations is part of the project activities for the ‘Fostering Civil Military Relations’ Project and funded by the National Endowment for Democracy (NED).

According to Olugbuo, the objective of the project is to strengthen civil-military relations through sustained dialogues and improved understanding between the military and civilians to improve accountability, security and respect for human rights in Nigeria.

He said: “Dialogue between state’s security actors and civilians are all part of the framework for better civil-military relations that enhance trust, accountability, respect for human rights and the sustenance of our democracy.

“It is worthy of note that the military’s presence in more than 30 states of the federation is active through various internal security operations in response to the growing internal insecurities that we are faced with as a nation. From Operation Lafiya Dole in the North-east to Operation Sharan Daji, in the North-west, Operation Awatse in the South-west, Crocodile Smile in the South-south, to the famous Operation Python Dance in the South-east one, two,  three (birthed to check robberies, kidnapping, cultism and secessionist agitation)Abubakar, 2017), it should be noted that the military is almost a permanent feature of our daily lives as civilians.

“These operations have come their own challenges in relations to human rights concerns hence the need for accountability forums for assessing military’s response to these complaints.”

He further posted that accountability   remains at the core of democracy, as a result, enhancing the framework for effective oversight of the security agencies through improving the feedback process to citizens, which will improve the professionalism of security actors.

He noted, “the increased focus by Nigerians and the international community to spotlight the accountability mechanisms by security agencies for addressing citizens’ complaints are part of measures to instil public confidence and improve the doctrine of civilian control over the Armed Forces especially.

“Existing internal accountability systems for taking complaints of civilians by the Army include the Human Rights Desk set up in 2016 within the Directorate of Civil Military Affairs in the army and the Call Centre to receive complaints against army personnel. The air force and the navy also have within themselves systems for receiving complaints from the public on the conduct of their officers.

“Within the Nigerian Police is the Public Complaints Rapid Response Unit (PCRRU) set up in 2015 to receive complaints from the public and other existing platforms.”

While admitting that the set up is commendable and in line with global best practices, he lamented that the missing links has been the efficacy of such systems through regular interface with civilians, adding that this view is under-scored by the largely opaque feedback mechanisms to complainants to indicate what actions are been taken to address their concerns.

He added, “it is against this background that the CLEEN Foundation has organised this forum in the South-east to provide opportunities for the civil populace to raise their security, human rights, and accountability concerns with the representatives from the military and para-military agencies in the zone including recommendations for improved collaboration.

“With today´s meeting, we want to offer a platform to exchange information, experiences, good practices among participating agencies on internal accountability systems and their role in holding their personnel accountable for actions against the citizens. We hope that this forum will inspire a renewed vigour to improve current efforts at strengthening internal accountability of security institutions and increase citizens’ awareness of existing redress mechanisms. “

He further extended a special appreciation to their collaborators- the National Human Rights Commission and the Institute for Peace and Conflict Resolution (IPCR) that have worked with them from the inception of this project in 2015.

“We specially appreciate participating security agencies, the media, technical experts, civil society organisations andtraditional leaders who will provide important contributions to the discussion. Thank you all for finding time out of your busy schedules to come for this forum,” he added.