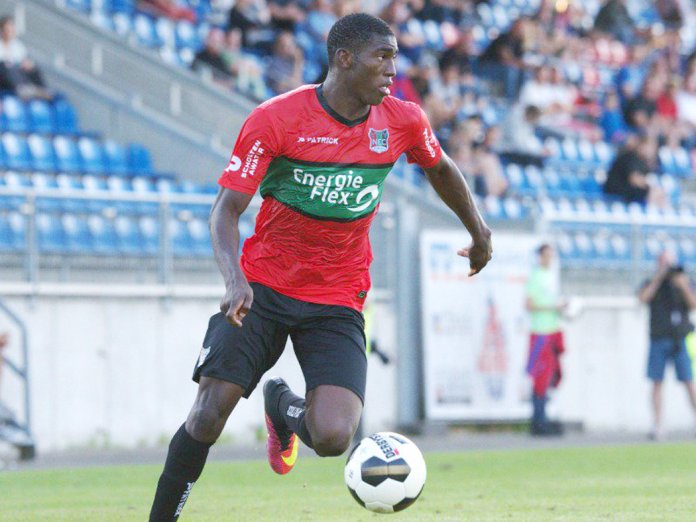 After Nigeria crashed out in the second round against Germany at the 2015 FIFA U-20 World Cup, the lackluster performance of the Flying Eagles did not deter European teams from scrambling for the signature of a member of the squad – Taiwo Awoniyi. He stood out of the lot and immediately became the toast of most European clubs. Prior to the 2015 U-20 World Cup, Awoniyi also had a scintillating performance for the Golden Eaglets at the 2013 FIFA U-17 World Cup held in the United Arab Emirates. However Awoniyi still struggling to actualise his potential in Europe

After the 2015 U-20 World Cup, Awoniyi was courted by Porto, Sporting Lisbon and Benfica, but he briefly settled for Swedish club, Kalmar. The young Nigerian trained with the first team on his arrival in Sweden. But he did not sign any professional contract with them.

The product of Imperial Academy, Odogbolu, Ogun State, eventually signed for English Premier league club, Liverpool, on August 31, 2015, for a fee of around £400,000. Four years on, Awoniyi is yet to blossom to the star he was touted to be.

After signing for Liverpool, he was immediately loaned out to FSV Frankfurt. He made his debut for the club the following year.

On 17 July 2018, Awoniyi signed a new long-term deal with Liverpool and on 23 July of the same year, he was sent on a season-long loan to another Belgian club, KAA Gent. He failed to score a single goal for the club after five months.

In January this year, his loan to Genk was cut short, and Awoniyi was loaned to Mouscron again.

At Mouscron, Awoniyi, showed early signs of returning to the top scoring form he had with the club last season, as he made the best of his second debut with a well-taken goal for the club. The ex-youth international showed his quality in his first game with aplomb.

He put aside the woes he faced at Gent, to romp home Mousconr’s match-winner against KV Oostende.

Though, Awoniyi failed to score a single league goal in 16 appearances with Gent, he has hit the ground running on a familiar hunting ground in Mouscron.

His effort helped Mouscron snatch a 2-1 home win that took them up to 14th on the table with 20 points from 22 matches, six points clear of relegation spot and Awoniyi’s reaction was overwhelming.

“I am extremely happy to start so well in my first game back at Royal, and that my goal helped us win this important match,” Awoniyi posted.

Late Super Eagles Coach Stephen Keshi once gave the U-20 striker the green light to lead the Super Eagles’ attack with the hope that he can bring his eye for goal to the senior team.

“I gave Awoniyi his first call up to the Super Eagles sometimes ago because I know that he has the quality of a goal poacher who can deliver the goals when needed, but playing for the age-grade national teams is different from the Super Eagles.

“Awoniyi is young and talented and has the quality of a good striker. So, who says he can’t lead the Eagles attack? He just needs to be ready for the task and show it on the field of play which I believe the boy is capable of doing,” late Keshi said.

If Awoniyi continues with this form at Mouscron, perhaps, he would get a permanent deal at the club.

Even Liverpool may come looking for him. For now, he has to remain focused.