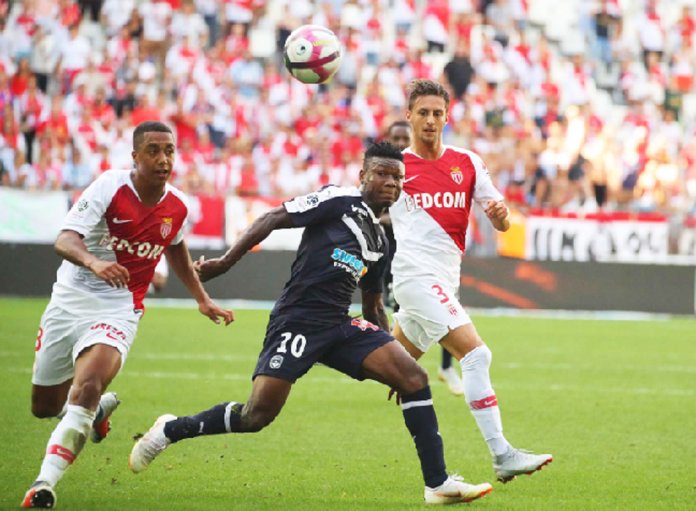 After an impressive performance during his time at Gent of Belgium, French side, Bordeaux turned their direction to Samuel Kalu as a replacement for their Brazilian winger, Malcom, who left for Spanish giants, Barcelona at the beginning of the season. The Nigerian prodigy has so far not disappointed the egg heads of his club

Super Eagles and Bordeaux forward Samuel Kalu was listed in the French Ligue 1 Team of the Week, joining Paris Saint-Germain superstars that include the world most expensive footballer, Neymah, Kylian Mbappé and Edinson Cavani.

Kalu was included in the French Ligue 1 Team of the Week following his impressive performance for Bordeaux in their 1-0 win against Dijon on Sunday.

The 21-year-old set up Cornelius Andreas in the 77th minute to score the winner and give Bordeaux three points against Dijon.

Kalu has been in good form in the French Ligue and was rewarded for his match-winning heroics.

Despite reigning Ligue 1 champions Paris Saint-Germain recording a 9-0 win over Guingamp there was space for Kalu in the Team of the Year.

In a 4-4-2 formation, Edison Cavani and French youngster Kylian Mbappe both scored hat-tricks and led the attack for the Team of the Week.

Kalu was given a rating of 8.24 despite only registering an assist in the encounter. He, however, was credited with two interceptions, two tackles, fouled two times and a shot on goal.

Kalu is expected to return to action when Bordeaux take on Strasbourg in their next league match.

After the €30 million departure of Brazilian winger, Malcom to Barcelona in the summer, Kalu was seen as the perfect replacement for him and Gus Poyet’s side paid a sum of €8 million for the youngster.

Kalu joined Yves Vanderhaeghe’s side from AS Trencin in 2016, and, alongside Nigerian international Moses Simon, has been one of their main players. Last season, the youngster scored seven league goals in 32 Belgian top-flight appearances and his scintillating performance was not missed by Super Eagles Manager, Gernot Rohr.

The German tactician said he had been monitoring Kalu’s performances since his days at Gent where he struck a good understanding with Nigerian midfielder Moses Simon, but did not pick the player for the 2018 World Cup in Russia because he had good players in his role.

“I never selected him. I saw him play for in his team. I took another, which is Simon Moses. He has been in my group since two years ago. He is also a winger, fast. He’s almost the same, but I found him better than Kalu,” the former Gabon manager said.

He added, “Samuel Kalu is a good dribbler, and he’s an overflowing winger. He’s explosive; he gives a lot of good balls. He overflows, he can play on both sides. I hope Bordeaux will have the satisfaction of seeing him evolve with these qualities.”

Reacting over the signing of Kalu by Boudex, club president Stephane Martin, revealed to French newspaper Sud Ouest, “He is a player that the recruitment team followed for a while. His choice was validated by Gustavo Poyet.”

Kalu moved to Ligue 1 champions after dazzling displays since joining the Ghelamco Arena outfit from AS Trencin in January 2016.

Kalu helped Gent qualify for the Play-Off 1 by netting just after the restart, and his inclusion is particularly not surprising as he has been impressive since his arrival in Belgium.

For Kalu, it may have been a shattered dream when Rohr did not look at their direction during the 2018 World Cup in Russia, but it was a dream come true when he made his debut for the Super Eagles in the 2019 Africa Cup of Nations qualifier against Seychelles.

Prior to the encounter, Kalu was keen to shine with the team, as he said: “I’m prepared to give everything to the Super Eagles. It’s my first call-up and I want to make the country proud. I’m expecting us to win the game and nothing more. It’s an important game that we cannot afford to lose. We have to work hard and do whatever we can to win the game.

“Kalu was very impressive all through the time he was on the field. He showed signs of a player that wants to earn a regular shirt in the team and with the way he played it is obvious he would be the one the players Rohr would be looking up to in future,” former Abiola Babes captain, Tajudeen Disu told THISDAY.

The Bordeaux winger was lively from the blast of the referee’s whistle to his exit, with his pace troubling the Seychelles backline. His quick feet were too hot to handle, and he was fouled in the penalty area just before the hour mark which resulted in Ighalo’s converted effort.

Kalu’s deft touches on the ball were a joy to behold while his dribbling and trickery were also impressive.