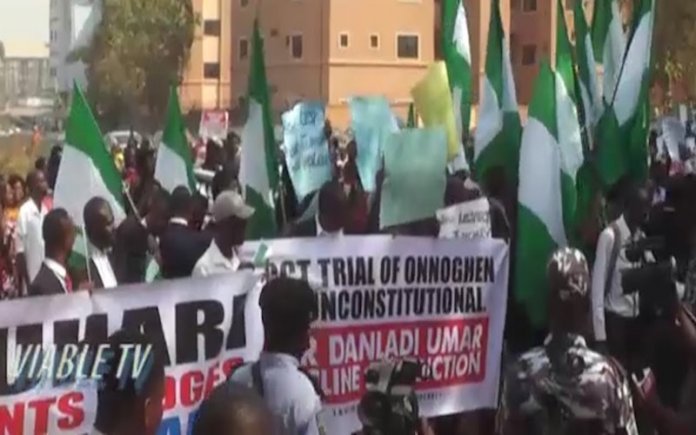 A group of opposition politicians, lawyers, civil society groups, under the aegis of National Interest Defenders yesterday in Abuja, stormed the headquarters of the Code of Conduct Tribunal (CCT) in protest against the ongoing trial of the Chief Justice of Nigeria (CJN), Justice Walter Nkanu Onnoghen.

The protesters, who were led by some of the leaders of the Coalition of United Political Parties (CUPP), were armed with placards with various inscriptions such as: “Amaechi, El-Rufai, Akpabio, Malami, APC; Brains behind Onnoghen’s Trial”; “CCT Trail of Onnoghen is Unconstitutional”, “Mr. Danladi Umar Decline Jurisdiction,” among others.

The National Coordinator and Joint spokesperson of the group, Ikenga Ugochinyere who addressed journalists, during the protest, warned President Muhammadu Buhari to stop pretending and displaying ignorance on what he described as what cabals in the presidency is doing to destroy the sacred judiciary.

“President Buhari should know that he and all members of the presidency cabals would be held responsible if for any reason there is a breach of peace and the country descends into anarchy,” he said.

Efforts to issue any warrant of arrest against Onnoghen, he warned, will throw Nigeria into confusion, adding that the ruling party should stop its plot to “illegally” remove the CJN from office after which an alleged pro-APC judge, Justice Tanko Mohammed, would be installed as acting Chief Justice of Nigeria.

He said, “The president wants to install a pliable justice to help APC get favourable judgments from the Supreme Court in the Rivers and Zamfara States APC crisis, in the presidential election and in the states where they are afraid they will lose elections and the states include, Akwa Ibom, Delta, Lagos, Benue, Imo, Kwara, Plateau, Kaduna, Abia and Sokoto States.”

He, however, urged Justice Tanko Mohammed to maintain a higher moral ground and stay away from the plot.

“Tanko Mohammed should stay away from this poisoned chalice so that when the plot fails, as it surely would, his name will not be found in the inglorious list with the likes of Chibuike Amaechi, Nasir el Rufai, Godswill Akpabio, Bola Tinubu, Adams Oshiomhole, Hope Uzodimma, Abubakar Malami, Yemi Osinbajo and Justice Mohammed.”