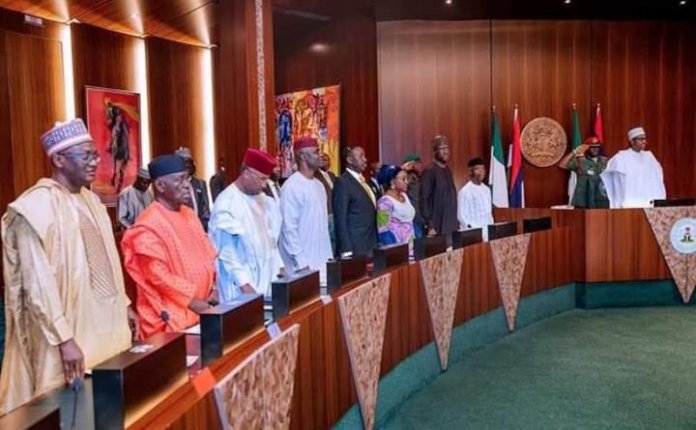 The National Council of State (NCS) rose from its first meeting in 2019 at the State House yesterday, approving N27,000 as the new national minimum wage.
The council, which also received briefings from the Chairman of the Independent National Electoral Commission (INEC), Prof. Mahmood Yakubu, on INEC’s preparation for the general election, approved all the arrangements put in place by the commission for the conduct of the forthcoming polls, saying it was satisfactory.

Briefing State House correspondents at the end of the meeting, the Minister of Labour and Employment, Dr. Chris Ngige, said the council also approved the transmission of a new National Minimum Wage Bill to the National Assembly.

Ngige explained that even though the minimum wage benchmark, as approved by all relevant organs, including the council of state, is N27,000, the federal government has on its part, resolved to pay N30,000 as the minimum wage to federal workers.

Ngige, who also explained that the N27,000 approved by the NCS was the nation’s benchmark on minimum wage, was swift to add that no employer could go below it, adding that anyone who wants to pay above the figure, like the federal government, is free to do so, and promised that the bill would be sent to the National Assembly before the close of work on Wednesday.

According to the minister, since the provision of national minimum wage in the Constitution is in the exclusive list, it cannot be exclusively handled by the executive, hence the need to send it to the National Assembly for its own legislative input.
He also said that after the apex legislative body would have concluded legislating on the bill, it would be returned to the president for his assent.

It is expected that the intervention of the NCS yesterday would put paid to several months of controversies on national minimum wage. Whereas the organised labour had initially demanded an upward review of the current N18,000 minimum wage to N65,500, the tripartite committee constituted by President Muhammadu Buhari in 2017 recommended N30,000 after intense negotiations with stakeholders.
But the governors rejected N30,000 as minimum wage and proposed N22,000, while the federal government proposed N24,000.
In the same vein, the organised private sector, which had initially proposed N25,000 later succumbed to pressure from the organised labour and reviewed its proposal to N30,000.

Ngige said, “The issue of national minimum wage, as you are aware, we have had a series of consultations on the new national minimum wage starting from the inauguration of the tripartite committee in September, 2017 by Mr. President.
“This committee was to handle all the issues surrounding the new minimum wage. It made use of laws, constitution, conventions on minimum wage fixing and specialist bodies like the National Bureau of Statistics, NISER and all other bodies that have to do with economic research’’, the Minister added.
“The Federal Executive Council received the report; after a tortuous debate, at that level, treated it. The National Economic Council comprising the governors and the vice-president chairing, looked at the report and finally today, the council of state. These three organs have permitted Mr. President now to transmit to the National Assembly the new National Minimum Wage Bill.

“Exemptions to this bill will be establishments that are not employing people up to the number of 25. The various times prescribed have also been altered in the bill and will be sent to the National Assembly before the close of work tomorrow (today).”

In his own briefing, the governor of Ondo State, Mr. Rotimi Akeredolu (SAN), said INEC chairman briefed the council on its arrangements for the forthcoming general election, saying the clear-cut briefing was so encompassing that everyone in the meeting was convinced that INEC was ready for the conduct of the general election.

According to him, the briefing by the INEC Chairman convinced everyone in the chamber that all arrangements put in place so far by the electoral commission were sufficient to give the anxious nation free, fair and credible polls.

He said, “The council was briefed by the INEC Chairman and the briefing as accepted by everybody was very lucid, very clear, all encompassing. The chairman also took the council through all the processes for states and national elections.

Akeredolu also said all necessary arrangements including the process of accreditation of voters had been duly put in place, adding that instead of using collapsible ballot boxes, transparent ballot boxes would be used and all had been imported.
Akeredolu also said the INEC Chairman reported to the council that the entire money budgeted for the election had been released to the commission adding that necessary consultations with stakeholders including artisans and unionists had begun.

Meanwhile, at the NCS meeting presided over by Buhari yesterday, former president, Chief Olusegun Obasanjo, and Buhari whom he had accused of plotting to rig the general election on Sunday, warmly exchanged greetings and shook hands with each other.
But the Chief Justice of Nigeria, Justice Walter Onnoghen, former military president, Gen. Ibrahim Babangida (rtd), and House of Representatives Speaker Yakubu Dogara, were absent at the meeting.
The meeting, which began at 11a.m. also, had in attendance, former President Goodluck Jonathan, Gen. Abdulsalami Abubakar and former Head of Interim National Government, Chief Ernest Shonekan.

Meanwhile, the Nigeria Labour Congress (NLC) has rejected the N27,000 new National Minimum Wage adopted by the National Council of State.
The NLC General Secretary, Mr. Peter Ozo-Eson, who made this known to journalists last night, said that the council of state has no jurisdiction to fix another amount after a Tripartite Committee had submitted its report.

“It is abysmal of government to be delaying the submission of an Executive Bill to the National Assembly and by wrongfully adopting N27,000 through the council of states,” he said.
Ozo-Eson, however, said the NLC has called an emergency National Executive Council meeting for Friday to weigh on the deadline given to government within which to submit an executive bill to the National Assembly.
The NLC scribe added that the federal government was only pushing for a shutdown of the economy with its latest action, warning that workers should not be held responsible for any development after its NEC meeting on Friday.