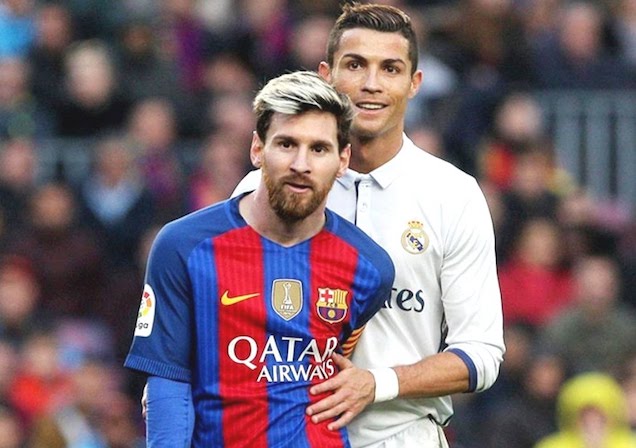 The rivalry between former World Footballer of the Year recipient Lionel Messi and Cristiano Ronaldo took another dimension last week as the duo go head to head to erase age-long goal record set by legendary Pele.

The duo in the last 11 years have five Ballon Dor each and had continued to break new ground in the present day football especially at club level when they have won several trophies both in domestic and Europe.

Barcelona forward, Messi has  scored his 576th goal in 660 appearances for Barcelona with goal against Levante last Thursday has his latest installment in Copa del Rey win for his club.

After beating Gerd Muller’s record of 565 goals for Bayern Munich in 1964-1969 back in November, the Argentine only has Pele ahead of him.

Pele, who played for Santos between 1956 and 1974, scored incredible 619 goals in 638 games for the Brazilian side. Thus, Messi needs 44 more goals to get ahead of the legendary Brazilian forward.

As Messi said back in November, he himself is not really focused on the individual achievements. “I am delighted, I have just found out now. I am happy for this new stat,” he told reporters after the game against PSV when he has also become the player with the most UCL goals for one club.

Another player who also has a chance of beating Pele’s record is, of course, Cristiano Ronaldo. The Portuguese forward has scored an impressive 589 goals in 789 games. However, it also should be noted, that Ronaldo is 869 days older than his counterpart.

Interestingly, Pele has bashed Messi for being a ‘one skill’ player back in December:

Earlier in 2015, the Brazilian legend, never accepted the Barca no.10 as a better player than himself, even praised his life-long rival Diego Maradona as superior to Leo: “You will ask me,” Pele said, “was (Maradona) better than Messi? Yes, by a lot. Much better.”

How Owerri Zone is Strategizing for Imo Governorship in 2023