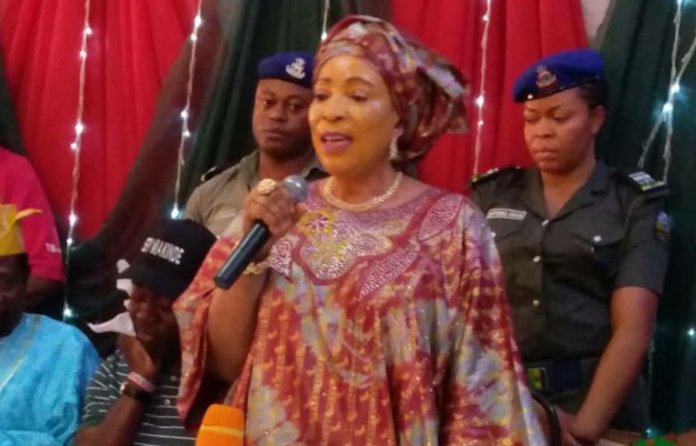 Mrs. Titilayo Atiku, wife of the presidential candidate of Peoples Democratic Party (PDP), Alhaji Atiku Abubakar has been attacked in Ibadan while canvassing votes for her husband.

THISDAY findings revealed that she was attacked by suspected political hoodlums on Friday evening at Sarkin Sasa house in Ojoo, a sprawling suburb of Ibadan. .

More findings showed that she was attacked after a fruitful discussion with the Sarkin Sasa and the Hausa community in the area when hoodlums pounced on her convoy and unleashed attack.

Multiple sources told THISDAY that a number of PDP supporters in her convoy sustained varying degrees of injuries during the attack.

However, the PDP governorship candidate in Oyo State, Mr. Seyi Makinde condemned the attack on Atiku’s wife, noting that the attack was uncalled while accusing the All Progressives Congress of orchestrating the attack.

In a statement by his Director of Media, Mr. Dotun Oyelade, Makinde described the attack as a very unfortunate incident where those who wanted to play clean and competitive politics were confronted by those who wanted to hold on to power by crook and by force and send their enforcers to attack and intimidate.”

According to the governorship candidate, with the way the APC is conducting itself, the next election may be rougher if things don’t go their way and that’s looking pretty likely.

In his reaction, the Oyo State Police Command said Atiku’s wife was not attacked.

In a statement by its Police Public Relations Officer, Mr. Adekunle Ajisebutu, the command said, “She wasn’t attacked. It was one of the area boys begging for money but was not given, that threw a stone.

“The stone hit side glass of a car belonging to a Fulani chief who was driving behind her convoy. The chief had come to join Sarkin Sasa to receive the visitor who after her visit left successfully unhurt.”

In another development, the gubernatorial candidate of the African Democratic Congress (ADC) in the state, Senator Olufemi Lanlehin yesterday decried the poverty among the residents of the state.

Lanlehin, who represented Oyo South in the Senate between 2011 and 2015 said Oyo “is in dire straight, urgently in need of people-focused and results oriented
leader. We re in difficult
times.

Speaking on the happenings in political circles, He said, “Without arguments, we are in a very difficult time in this state. The resources are lean, the problems are many and our people are suffering.”

On the governorship contest, the candidate said, “to a very large extent, I believe in what I am living for. I have never even look for anything out of the ordinary anyway, because I was born into a legacy of service and performance.

“I mean one’s pedigree and what one is able to leave behind is what matters to me. I do not want to denigrate anybody, but what has the government that has been there for eight years done? What is their legacy? Is it in education where we’re now 26th position out of 36 states in WAEC and 28th position in NECO?

“Is it immunisation? Or business? Name it. Go everywhere now, you will see people who are hungry and very angry. The situation is very tense. So, we must be able to do something that will relieve our people of their very terrible position,” Lanlehin added.

On his manifestoes, Lanlehin promised “to utilise the state’s lean resources for the people of the state. Anybody can read any manifesto. You can have egghead professor, doctor as well as lawyers. They can put anything together for you, you can cram it and reel them out.