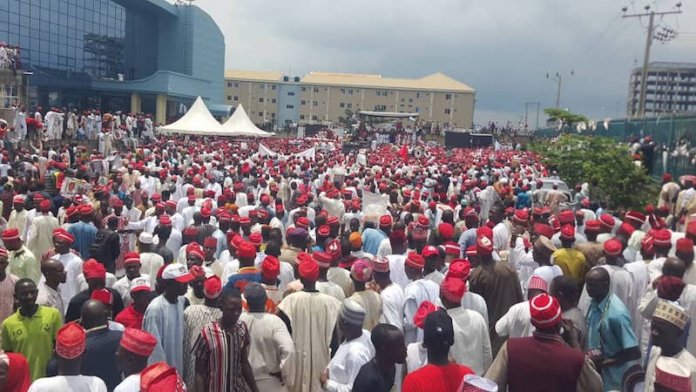 As the presidential and governorship elections gathered momentum, the Katsina State Chairman of Kwankwasiyya Movement, Alhaji Inusa Dankama, and 200 members of the group have dumped the Peoples Democratic Party (PDP) for the All Progressives Congress (APC).

Dankama, who said they dumped the PDP and Kwankwasiyya because of the impressive youth empowerment programmes the APC-led government in the state had introduced since it assumed office in 2015, reaffirmed his support for APC victory in the forthcoming polls.

Receiving the defectors, the state Governor, Aminu Masari, said APC is their home, adding that they were misled to join the PDP for “someone else’s personal interest.”

Masari said the social intervention programmes of the APC administration had gone a long way in empowering unemployed youths, especially the N-power and S-power programmes.

In 2015, we made some promises and I am happy today because we have fulfilled those promises made. Some of the promises include the school feeding programme for primary school pupils; the N-Power and S-power programmes, under which some unemployed graduates are being gainfully engaged,” he explained.

While urging electorate to vote for President Muhammadu Buhari and other APC candidates, Masari assured the APC of his determination to deliver his state to the party in the forthcoming presidential election.

In his opening remarks, the state Chairman of the Buhari/Masari Campaign Team, Dr. Mustapha Inuwa, tasked women and youths of the APC to ensure victory for the party in the forthcoming presidential and governorship elections.

He urged Nigerians to support the re-election of President Buhari and Masari to enable them consolidate on their achievements so far recorded in the areas of road construction, health, education and railway projects.