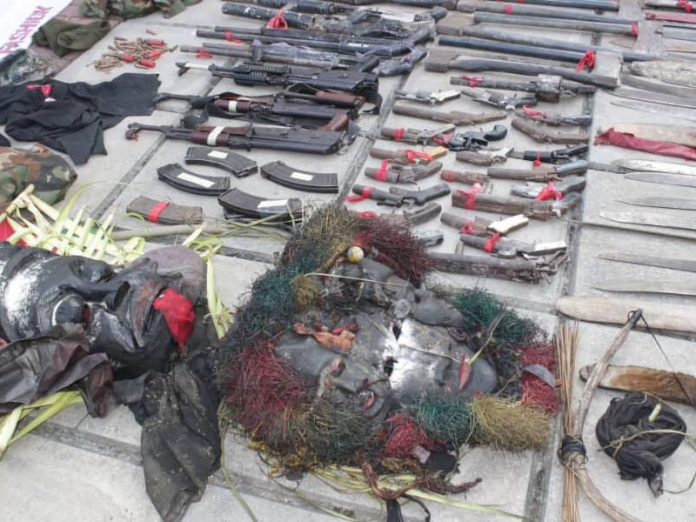 The Ogun State Police Command Saturday disclosed that it had intercepted a truck conveying 34,865 live cartridges from Togo through Ilara, a border town in Imeko-Afon Local Government Area of the state.

The command equally arrested three suspects namely a Togolese, Isa Muhammad and two Nigerians; Alabi Fayemi and Seyi Bamgbose in connections with the smuggling of the live cartridges.

THISDAY checks showed that the suspects were arrested at a stop-and-search by a police patrol team stationed at Olorunda, a border community between Abeokuta North and Imeko Afon local government areas of the state.

Iliyasu said the cartridges were neatly concealed in the underneath the mini truck with registration number, KSF 254 XX (Lagos) and was being transported to Onitsha, in Anambra State.

He said the suspects attempted inducing the officers, but the offer was rejected. He added that the police in the State have been on the trail of the cartel in the last six months before they were arrested.

He said, “Our operatives on border patrol led by Muhammad, while on a routine patrol of the border area based on intelligence reports intercepted the Toyota Dyna Mini truck with registration number KSF 254 XX with some cartons neatly concealed therein.

“The mode of the concealment aroused the suspicion of our men. Consequently, the vehicle was stopped and properly searched. Upon the search, 34, 865 live cartridges were discovered in cartons neatly concealed inside the vehicle.”

One of the prime suspects, Isa Muhammad told journalists that the vehicle was handed over to him by one of his Nigerian customers based in Onitsha to help drive it.

Muhammad said since he did not have a valid driver’s licence, he approached another friend, Bamgbose, who is a qualified driver to help him drive the vehicle while he served as motor boy.

According to him, the vehicle was successfully brought into Nigeria from Republic of Togo. They were e nroute Abeokuta for a repair work on the vehicle when they were arrested by the Police.

Muhammad denied knowledge of the ammunition, saying he did not know the name of the man that gave the vehicle to him and would have taken the vehicle to Onitsha, thinking it was empty.

Isa said, “I am 36 years old. I was a bus conductor. But I told the man, who introduced me to the job to get a better job. He later called me that he has one small vehicle. But I told him that I did not have a driver’s license but I have some of my friends that can drive.

“On our way, the police stopped us and said they are suspecting the vehicle. But we said we do not know anything about it. We thought it was the documents they are talking about. I do not know the owner of the motor. But he comes to Togo to buy vehicles and used cloths.

When he gave me the vehicle, he said we should bring it to Onitsha and call him when we get there. We were not aware that anything was concealed in the vehicle. We thought we were driving an empty vehicle. Our understanding was that when we get to Onitsha, we will be doing the real job. I have called him immediately we were arrested and he spoke with the police.”

In his account, Bamgbose said he was only called “to engage in charcoal business. I know Isa in Idi Iroko border. He used to sleep in my house whenever they come to Nigeria with his boss. One day, I told him I do not have a job again because my vehicle was seized by the customs.

“He called me that a vehicle is available. I was happy because he told me it was a new vehicle. We went to Togo where the vehicle was packed. I observed that the vehicle was registered with Nigeria number. When we got to Nigeria, some of my friends told me that the spring of the vehicle was too small for charcoal business. I told him we should go to Abeokuta to repair the vehicle.

“On the way, we were arrested at Imala. When I was asked to park, I complied because I know all the officers. I was sure the documents were up to date. I was even expecting the police to name their price since I know all of them. But the story was different.

“When they started offloading, I was equally astonished, I did not expect what I saw from the vehicle because it was right in our presence that the content of the vehicle was off-loaded.”