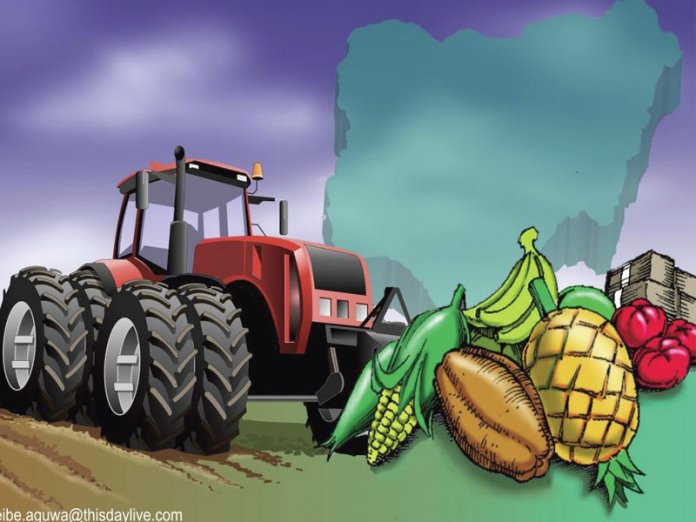 The craving for white collar jobs among the younger generation is natural because of the glitz and glamour that comes with it. For a large section of the millennial, the desire to go into farming is not an option in sight.

Farming is seen as crude and dirty. But for a few, it is different. For these set of people, farming is a career path. It is a source of livelihood.

Though as a business, it does not come with quick wins, and breakthrough stories. But there are those with proven results and successes have their stories to share. Michael Olanismi is one individual who has taken this somewhat unusual career path, abandoning the lush glories and promises of white collar job.

He is a man driven by passion for agriculture. His farming career began early in life, when he started farming with his parents.

Despite the unpleasant nature of peasant farming in the country, Olanismi’s desire was to own big farm in the future.

At the age of eight, he decided to own his farm, whilst working in his parents. He realised that his parents had tough times on the farm because they didn’t have enough money to embark on large scale farming.

“I started having my own farm aside my parent’s farm since I was age 8. I believed my parents had tough times on the farm because they don’t have money for large scale farming and I believe if I go to school, get educated, do big businesses and get money, I can be a very successful and happy farmer.

“So after three years of running several small scale businesses, I decided to kick start my dream to own a farm,” he noted.

In a bid to pursue his dream, he proceeded to Obafemi Awolowo University, Ile-Ife to study food science and technology, a new wave of opportunity which he hoped would give him advance his knowledge on how to carry out the farming practices better. After the University Education, he pursued a degree in degree in business information system in Malaysia.

In 2018, he was selected for YALI West Africa Regional Leadership Programme. Also, in 2018, he became a member of the Commonwealth open leadership center.

To further his dreams, in 2016, he co-founded of Modate Farms with Mercy Ajifola. They specialise in the production of essential vegetables such as bell pepper, scotch bonnet, okra and tomatoes. They chose these crops because they are not usually grown around his location despite being consumed daily.

“Growing up, I used to believe our soil type cannot grow these crops but I was surprised that they can actually do well here, so I decided to start my farm venture from there. I also do little of cassava due to its popularity here, available market and people to process for me.

“I look forward to establishing large scale greenhouse farming once I am able to raise enough funds for it.
“I am still in the zone of small scale farming because I still cultivate less than five acres. Nevertheless, I have expanded since the past three years. I started with dry season vegetable on one plot of land in 2016 and in 2018 in partnership with Mercy Ajifola another passionate agri-preneurs Modate Farms did more than three acres,” he noted.
He further noted that as a Small Medium Scale Enterprise (SMEs), access to capital is not easy, because of the bottlenecks involved.

According to him: “I have attended two Bank of Industry (BOI) sponsored training, but I will have to build capacity, before I will be fit for such loan. Loan from commercial banks is not advisable for a start-up farmer. The easiest form of funding is the Bank of Agriculture, (BOA)

“If you can present a viable idea, you can get loan without collateral and with relatively low interest rate. Shortly after the emerging entrepreneur training in 2017, I was able to secure a small loan from BOA to expand my vegetable farm.

“The market is everywhere, peppers and tomatoes are everyday need so it is easy to get market women from the nearest market to our produce. There are larger markets around when the volume is large for example Shasha market in Akure.”

One of the most frustrating challenges they have encountered so far is access to quality seeds and agrochemicals. In 2017, they recorded a huge loss due to bad seeds and also early in 2018, they encountered a setback when a weed killer malfunctioned.

After rigorous research, they have been able to locate reliable sources for the right seeds and chemicals. They get most of their seeds now from National Horticulture Research Center (NIHORT) Ibadan, Oyo State.

They realised that not all farmers in the country can always travel to Ibadan to get good seeds. Therefore, they are currently working on an ecommerce project that would be selling only farm inputs, equipment and materials, “so that other young people who want to venture into farming will not experience the same challenge.”

He said: “With the support of my partner and co-founder, we launched a community development initiative termed Secured Africa Initiative. Through this foundation, we enrol some out of school young boys and girls to engage work on the farm for one year.

“A certain percentage of the proceeds of the farm are used for empowering the beneficiaries. And they also get monthly stipend during that year.

“During the scheme, the beneficiaries learn new skills and we help them start-up in their new business at the end of the year. Due to low start-up income, we were only able to engage three people last year.

“If we are able to get sponsors and investors, we plan to involve and empower at least 20 participants each year. With the involvement of these participants and other casual and contract labour, we were able to achieve stability on the farm despite the early setback.

“The participants helped in monitoring the farm work. The low use of irrigation in this country is a very big opportunity for people to invest in. Production of vegetables during dry season is very profitable, although it is capital intensive due to cost of setting up irrigation facilities, but you can quickly get back your capital within a short time.

“We tried to do some fund raising last year to do irrigation, but could not meet up. I hope we are able to secure fund this year to setup our irrigation facilities.”

Despite the early setbacks during planting, they were still able to break even in 2018 owing to the fact that their major harvest was able to escape glut and sold at relatively good prices.

He explained that if government provides support for me in terms of land, finance, training and mentorship, he can provide jobs for more than 2000 youths that he would engage in different stages of the agriculture value chain.
He argued that if the government can focus on identifying passionate agri-preneurs, then it would provide opportunity to build ventures that would employ thousands of other young people and give them the income security they want.

Olanismi urged government to also implement policies that regulate the prices of crops in the country, adding that farmers are suffering because the government is not really concerned about their welfare.

He added that if prices are regulated and distribution channels are well supported to minimise waste, the agriculture sector would be more attractive for investment.

According to Olanismi: “I will rate the ease of doing farm business here in Ondo State as average. You can easily secure farmland especially if you go through a local who can link you up with land owners.

“I don’t know of reputable agents who can help acquire parcels of land for farming. I have access to as many hectares of land as I need because I situate my farm at my home town of Ifon, Ose Local Government Area, Ondo state.

“The buyers in the market can be frustrating especially when there is glut. Lack of government regulations make it worse. Lack of good road network is another major challenge to farming in Ondo state.

“Despite agriculture being the main occupation in most of the communities in the state, government in the state don’t consider constructing or maintaining farm roads which I believe will have greater social and economic impacts than most of their capital projects.”