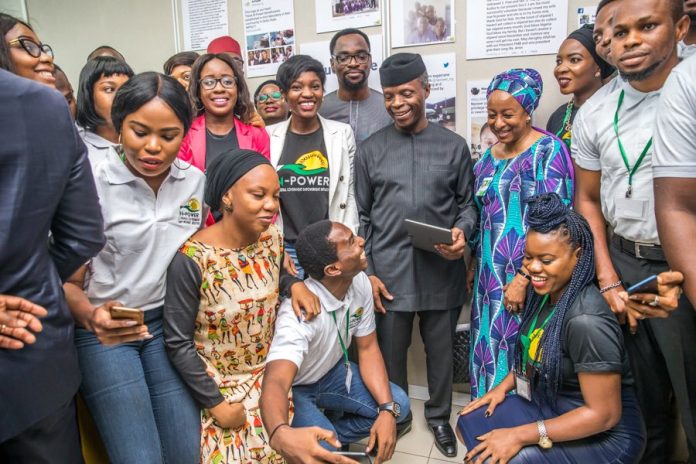 The N-Power, one of the various federal government’s social intervention programmes focused on job creation and employment, remained the most popular initiative by the current administration.

According to the report on the national awareness levels of social investment programme,

which was conducted by the research arm of the Presidential Delivery Unit (PDU), under the Office of the Vice President, N-Power awareness among Nigerians was recorded at 81.3 per cent, the highest among other social intervention schemes.

The study further noted that while the national awareness of the Government Enterprise and Empowerment Programme (GEEP) and the National Home Grown School Feeding Programme stood at 66.3 per cent and 67.4 per cent respectively, the Conditional Cash Transfer (CCT) programme r ecorded 53.1 per cent.

Head of the PDU, Mr. Tunde Osibamowo said:“What we find most interesting, apart from the relatively high level of awareness of the Social Investment Programmes, is that respondents almost universally – that is, about nine out of 10 Nigerians, believe that the programmes are very good initiatives, even when asked if they would prefer the government to use the money for other programmes.”

The report came amid criticisms from some sections that the various social intervention programmes were largely unpopular and of no impact.

But, Osibamowo, in a statement issued by Communications Advisor, Presidential Delivery Unit, Temitayo Dada, argued that the outcome of the survey indicated that: “Nigerians as a people support the government’s provision of direct help to the poor, vulnerable and elderly.”

“Surprisingly, the results show that the programmes are most popular in the northern states,especially in the North-West, with the highest average awareness of 73.8 per cent,” the report stated.

It however, pointed out that the initiatives are least popular in the South-South and South-East, where average awareness stood at 63.8 per cent and 62.1 per cent respectively.

The report observed that in each of the six geo-political zones, average collective awareness of all N-SIPs was over 60 per cent while awareness at the zonal level indicated that collective support of the programmes was strongest in the North-West and North-Central at 95.9 per cent and 92.4 per cent respectively.

“In the other zones, average support ranges from 88.8 per cent to 90.8 per cent. The collective PDU survey findings will provide policy makers and programme implementers with detailed data to support critical decision-making and programme impact assessments.More importantly, these results will stimulate nation-wide discourse on the government’s role in socio-economic development in Africa’s most populous nation,” the statement added.

Essentially, the PDU was established to drive and support the achievement of priority goals of the federal government.

With current focus on the Social Investment Programmes (N-SIPs), the PDU supports delivery by tracking results, facilitating problem solving and reporting. In addition, a key objective of the PDU is ‘hearing the voice of the beneficiary.