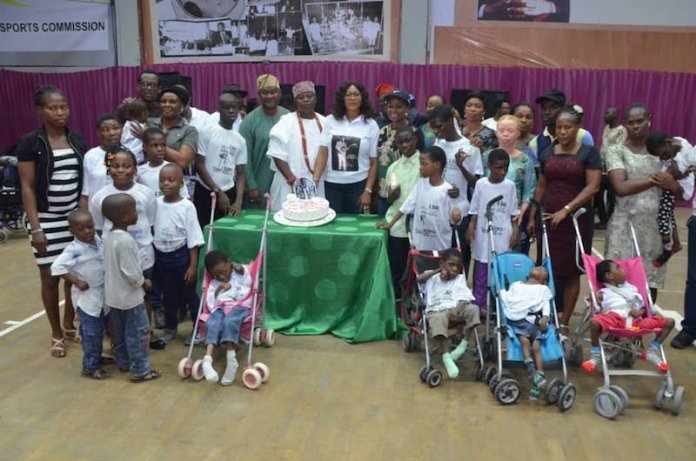 Funmi Ogundare reports that considering the abuse, exploitation, discrimation and stigmatization faced by physically challenged children, a non-governmental organisation; Iyaniwura Children Care Foundation has decided to offer this group of people an opportunity to live

In Nigeria, the condition of physically challenged children and even those from less privileged backgrounds attracts little or no attention. As a result, the rights of the disabled are often violated, excluded and relegated in planning and national development.

However, a non-governmental organisation, Iyaniwura Children Care Foundation (ICCF) has decided to take it upon itself to assist children who are physically challenged and are under aged to overcome physical, emotional and mental difficulties and develop into responsible adults.

The foundation, which has foremost Juju maestro, King Sunny Ade (KSA) as its grand patron, has in the last six years, been focusing on the holistic care and development of motherless and less privileged or abandoned children; helping with children’s welfare; donating funds to sustain motherless children’s homes and disadvantaged children.
At a programme tagged ‘2018 Smile of Hope: A Day with a Living Legend King Sunny Ade’, the Project Coordinator, Mrs. Matilda Olajumoke Otitoloju told THISDAY that the foundation takes interest in the education, security, development of physically challenged children from when they are a day old until they are 12 years old, adding that it had to extend that till they attain the age of 17 because some of them tend to look younger than their ages.

She said her perception about children who are physically challenged is different because she believes that they are able in their own way.

“Every one of them has their ability and that is why I have all the children inclusive. I don’t differentiate them because each child has his own peculiar ability and personality.”

Highlighting the challenges encountered apart from taking care of the children, she said, “the only challenge I have which is outside my immediate advocacy is child abuse. We have many people abusing the children and taking advantage of them. I have lots of cases in court. I can tell you that between July and September last year, I have about seven rape cases in court of my children being abused. Unfortunately, the court keeps on adjourning the cases and at the end, the parents get tired, they don’t want to come again despite my efforts in encouraging them.

“Sometimes I provide transportation for them and sometimes they tell me that there is no money for food. Sometimes I have to give something substantial to parents for their children, now to think of them going to court every now and then. That is the only challenge I have, people abusing my children, but personally with them, I am coping very well with them.

“They are undergoing their therapy and most of them are in schools. We thank the Lagos State government for believing in inclusion, so there are so many inclusive schools now that they attend.”

Asked about the project the foundation embarks on to impact the lives of physically challenged children, Otitoloju said: “We usually have five major projects every year. The first is children’s day which is more of our educational project. Last year, we did skills acquisition and creativity, when we had to bring out the innate ability in them. They were all inclusive. We also hold programmes to celebrate their childhood and we learn from them their innate curiosity and sometimes we teach them what to do.

“Last year, we had parents instilling moral values in their children because the children mirrors them, irrespective of who they are. When a child sees something been done everyday, he or she will like to emulate it. In August, we had school support programme to assist children in various communities in their schools.

“We support the schools through donation of building projects or the children in their personal care. We were able to cater for 500 children in Ikorodu by providing school uniforms for them and we chose five communities, Majidun, Owoelepe, Igbogbo, Imota and Agbede all in Ikorodu, Lagos. We want to build our capital base in Lagos first, then we can start looking outwards later, though we have people calling us from Ogun State but we still want to satisfy the ones in Lagos.”

The project coordinator described the experience so far as tremendous, saying, “I give glory to God, He has given me the strength and support. I have able staff, I have more volunteers that are coming in everyday. I have people calling me wanting to be part of our programmes to support us. We also have parents’ association also, we sensitise them on parenting and how to protect their children from abuses and cater for them on the types of nutritional meals to give them.

“Sometimes we organise game activities for the children, they do their therapy and medical checkup for them and their parents. That holds every October because we believe that the health of the mother is also the health of the child. We did cervical and breast cancer screening for the parents. To God be the glory, out of 100 people that we did, none had any issue.

“In November, we had a child abuse awareness walk. This is done by the children, they go out to campaign based on their local government. November is also our parents sensitisation, while December is our smile of hope programmes respectively.”

On how she was able to get King Sunny Ade to buy into the initiative, she said: “It is just the direction when God is with you. I just asked one or two people that I needed to meet him that I have something in mind that he would be interested in.

“It took me six months before I could get him and when I finally got him, he keyed into it and since then he has been there for us, he is our grand patron. He has been very supportive all the way. If you go to our Facebook page, you will see how he has been doing with the children.”

“The centre will be like a school, but not for the conventional academics. It will accommodate children with autism and down syndrome; we will teach them personal care and how to take care of themselves, how to cook and some other activities such as computer, sewing, baking and things that will help them in their personal lives to forge ahead in life rather than depend on anybody.”

The Chairman of the foundation, Mr. Bankole Animashaun said the issue of disability is something that people don’t like to talk about, adding that it is not something that is hidden or chosen, but it just happens to people.

He stressed the need for the country to make efforts in addressing the issue and be committed to the course of helping those with physical disabilities.

At the 2018 ‘Smile of Hope’ programme, awards were presented to people that have been supporting the foundation over the years.

One of the awardees, a former Rector of Lagos State Polytechnic and pioneer Executive Secretary, Lagos State Technical and Vocational Education Board (LASTVEB), Chief Olawumi Gasper thanked the foundation for the award, saying that it will spur him to continue to support the initiative of bringing happiness to the physically challenged.

“The next edition will surely be more delightful with the involvement of more personalities,” he said.