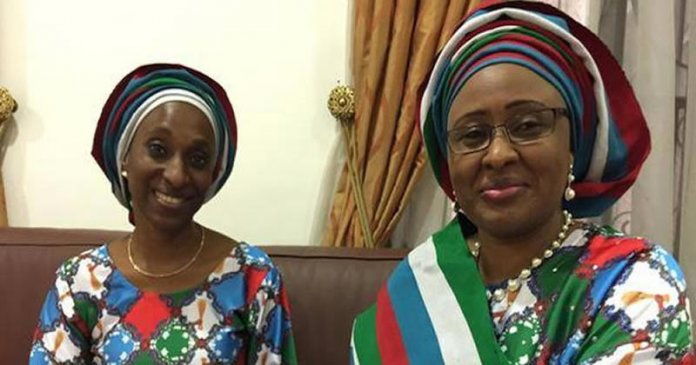 The wife of President Muhammadu Buhari, Aisha, yesterday staged a rally in Lafia, Nasarawa State capital, for the North-central geo-political Zone to canvass for votes for her husband’s re-election.

The First Lady, who was represented by the wife of the Vice President, Mrs. Oludolapo Osinbajo, at the women and youth campaign rally of the All Progressives Congress (APC) North-central zonal rally, told the crowd at the event that a vote for the re-election of President Buhari will take Nigerians to the next level so that more people will come out of poverty, more children will have food and more people will sleep in their homes without fear.

According to her, “The president doesn’t want to leave anybody behind. Both the women and children have something in Buhari’s government. When they ask you why you are fronting for the re-election of the president, tell them we are going to the next level. There are some children when they go to school, they don’t have food to eat, but today, the government of President Buhari feeds 9.3 million children in schools everyday.”

The president’s wife therefore said because of the government of Buhari, the children are not hungry anymore and they are going to the next level.

“When they ask you again, tell them that there are many women who don’t have jobs but now some of them are cooking for the children in schools. It is not possible for a woman to cook for other children and her children will not eat. Because of Buhari’s government, women not have jobs; women have food for their children, women have money to trade in the markets. They now have Tradermoni and Marketmoni,” she stated.

The first lady continued by asking the women to tell the people that Nigeria is going to the next level as the Buhari government is working for everybody, including the rich and the poor.

According to the president’s wife, “What the youths and women are supposed to do is for them to go from one house to another and spread the message of ‘Next Level’. You should not sleep at home during the elections. Nobody should allow their children to fight on election day but to vote. After you have finished voting, you must wait to see them count your votes. Nobody should go home.”

The Nasarawa State Governor, Umaru Tanko Al-Makura, re-echoed that the state is a home to President Buhari as it has been supporting the president since 2011.

Al-Makura, who spoke through the state Deputy Governor, Silas Agara, therefore called on other states of the federation to mobilise the electorate to support the re-election of Buhari in the forthcoming general election to enable the continuation of the president’s good innovations to better the welfare of the citizens.