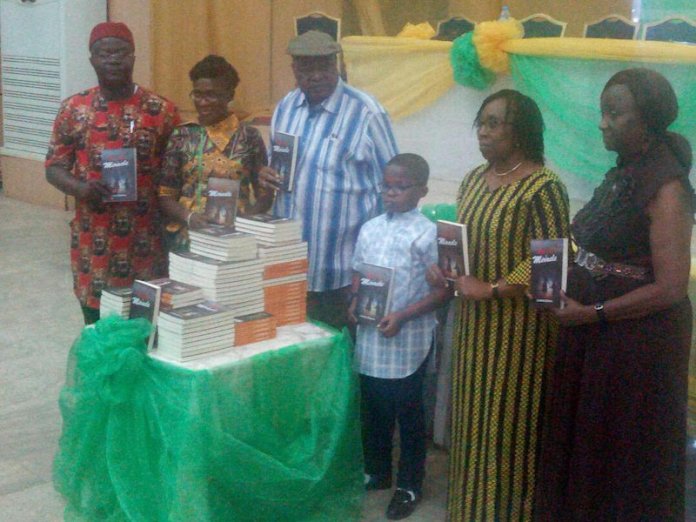 Chinwe Ezeanya is a poet and a writer. Her story touches the heart, forcing those who have read her book, “More than a Miracle”, to shed tears.

It is almost unlikely to come across a person that will give her organ to another soul. But Ezeanya’s sense of humanity made her donate her liver so that her only son, who required an organ transplant could live.

More Than a Miracle is a true life story. It is an account of a mother’s enduring trial, faith and love for her child. It is not the archetypal fiction, adapted into a Nollywood flick for undiscerning viewers.

To the contrary, however, it is an incredible story worth telling because of its uniqueness. It tells of Ezeanya’s openness about her excruciating journey to save Dike Ezeanya, her only son, who was diagnosed with medical challenges after his birth.

The book revealed that Ezeanya donated her liver to an Indian family, who in turn swapped their own liver to save Dike. She also set up a Dike Ezeanya Foundation for Liver Diseases (DEFFLID) to provide direction and support for people with liver diseases and similar health challenges.

The book, which is available on Amazon, Terra Kulture, Jazzhole and Konga Link, and other book outlets nationwide, runs into five chapters. It was published in 2018 and reviewed by a renowned journalist, Constance Ikokwu, during its launch at Merit House, Maitama, Abuja.

The 250 pages account is truly a masterpiece. Ezeanya’s agony began when she was pregnant with Dike and to the point when she realised that there was something egregiously wrong with the newborn baby boy.

The book narrated in engrossing details, the medical journey she went through plus the pains and frustration she experienced, visiting doctors in search of explanation. She also had many sleepless nights, weeping and agonising.

“This is a unique story worth telling because it brings out a personal belief- the strength of believing that there is nothing that God wants you to achieve that you will not be able to achieve. It is also a story about an incredible boy bringing joy to the family. Every child ought to be a subject of love, somebody that you cuddle, bring up and you give the person the best that you can. When I look around in Nigeria, I am afraid that my conclusion, seeing children who are begging in street corners, that something is missing in our DNA on how to love children. If there has been any serious love they are not going to allow begging on the streets, those children would have been in schools.

“They would have been the foundation of human capital. Let us bear in mind that those of you, who for whatever reason, come across a child who needs help, who ought to be helped, to insensitive government who allows the future of the nation to go unprotected on health, then we have to raise our voices in very serious protest,” remarked the chairman of the book launch, Ambassador Dele Cole.

Ikokwu while reviewing the book said: “I find the author’s strength during this time astonishing. For someone who kept going through hell, she found time to keep a journal. Clearly she kept her creativity alive. It was also obvious that she tackled her son’s toils with determination which is partly why we have this book today. And she said in her own words while seeking for medical solutions and I quote, ‘I was overwhelmed by the update of the doctors, the only consolation I had was my Bible, the open channel devotionals and my writings. I had faith that whatever God knows is worse, even doctors had all the resources, man power and expertise to treat, I affirmed that God was the ultimate healer’.”

She also acknowledged that given her plight, the author had to learn to deal with the tough time by coming to the conclusion that it was better to hitch her wagon with God and to embrace advancements in medicine.

The book lays bare the poor medical conditions of Nigeria and many people are likely to react to it in a variety of ways.

The author said her motive for writing More Than A Miracle was stirred by feeling that she needed to talk about Dike and her personal life as it would be impossible for her without talking about the things that she felt especially concerning this issue.

“I had to talk about myself because when Dike’s case came up, we didn’t have a solution but now it is no longer about me, it is about us, about the children in the country; every child who has a liver disease even those that have gone and those that are not yet born. I had to talk about my personal experiences because it was a tough journey. And perhaps through this journey people will begin to understand that they need to be determined to be able to save their loved ones. I need the country to understand that we need help for those without hope, that is why we had to set Dike Ezeanya Foundation because with it, you will never walk alone,” she said.

She described as the most difficult part of the struggle the hopelessness of the situation, which made it seem as if Dike had a death sentence. The author also disclosed since they did not have the right match for Dike, they decided to put their faith in God, until against all odds, a solution was found.

Dike’s conditions put a strain on Ezeanya’s marriage, incurred huge medical costs and called for moments of decisions. But she refused to be weighed down by her sorrow, instead choosing to fight tenaciously. She also fervently asked God to intervene by saving her son.

Dike was diagnosed with necrotising enterocolitis, three days after birth and was hospitalised for two weeks after he developed jaundice. He also suffered a deteriorating liver condition as a result of biliary atresia thereafter.

The infant struggled with these defects and after further medical tests in Port Harcourt, India and the United States, it was found that Dike suffered from a congenital problem and therefore required a liver transplant.

The first one and half year after Dike’s diagnosis was tough. He had to undergo blood transfusion, he was perpetually hungry because of mandated fasting to enable the doctors carry out a barrage of tests, making the poor chap to cry a bucket load at the beginning of his life.

From a medical perspective, it was also the first swap liver transplant undertaken in India and a landmark surgery that inspired new way of organ transplantation.

“I want a Nigeria where every child, every adult who comes up with a liver disease finds a solution. We want to be that intermediary, to be able to seek the solution to their ailments. The proceeds from the book will go into the foundation to help both Dike and other children who face similar challenges. As a result of what we do in the foundation we have had a number of children that had successful liver transplant after Dike and we hope that more people through us will able to succeed in saving their loved ones,” she said while offering reasons on the motive for setting up the DEFFLID.

President of DEFFLID, Emeka Ihumezie declared that Ezeanya’s inspiration in writing the book was to spread the message and enlighten Nigerians about what liver diseases actually are.

Ihumezie remarked that in Nigeria, anyone who has a liver disease is like someone who has been subjected to a death sentence, saying right from the outset, the process of diagnosis through treatment can be very terrible.

“To get a proper diagnosis you will actually have to do it outside Nigeria. You might just get a physical preliminary diagnosis. To actually get the proper diagnosis that will confirm that what you have is the real liver disease is not something that can be treated here in Nigeria.

“The process of even getting the right organ is terrible in Nigeria, you can’t even get a proper organ matching. And to do that is something most of us don’t even know because we have not even experienced the issue of having liver problem and we should be grateful to God. If you have a liver disease in Nigeria, you will walk that walk alone, just like Ezeanya and her family walked the walk alone,” Ihumezie declared.