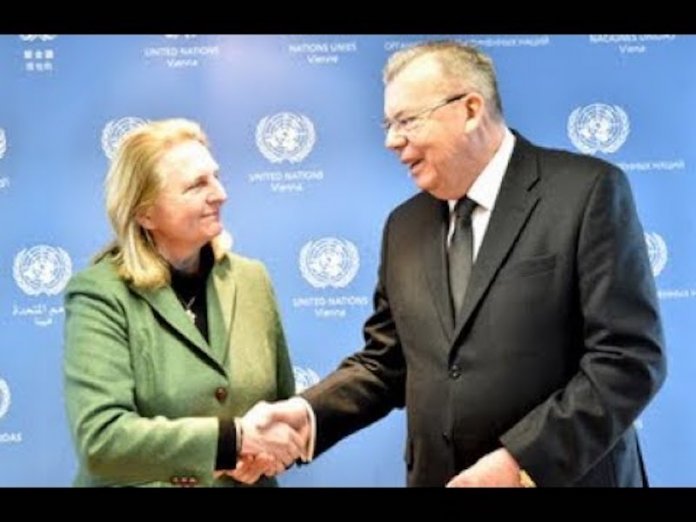 The number of human trafficking victims is on the rise because armed groups and terrorists are trafficking women and children to generate funds and recruitment, according to the latest Global Report on Trafficking in Persons which was launched yesterday in Vienna, Austria.

A statement issued yesterday by the United Nations Information Service in Vienna (UNIS) said the report by the United Nations Office on Drugs and Crime (UNODC) was presented by its Executive Director, Yury Fedotov, at a special event of the Commission on Crime Prevention and Criminal Justice (CCPCJ) with Austrian Foreign Minister, Karin Kneissl.

The statement said the report drew information from 142 countries and examines trafficking trends and patterns, and put the spotlight on human trafficking in armed conflict.

According to Fedotov, “Child soldiers, forced labour, sexual slavery and human trafficking have taken a horrific dimensions as armed groups and terrorists use it to spread fear and gain victims to offer as incentives to recruit new fighters.

“This report shows that we need to step up technical assistance and strengthen cooperation to support all countries to protect victims and bring criminals to justice as well as achieve the Sustainable Development Goals.”

The Australian Minister, Kneissl, said the report highlighted the importance of the Global Report in supporting UN member states to devise targeted, informed responses to this “grave violation of human rights and human dignity.

“Sound information and a solid base of evidence for our policies are two of the most important things to fight this disgusting crime in the most efficient way possible. We simply need to know what we are actually dealing with.”

Globally, countries are detecting and reporting more victims and convicting more traffickers, according to the report.

The report also found a clear increase in the number of children being trafficked, who now account for 30 per cent of all detected victims, with far more girls detected than boys. Sexual exploitation continues to be the main purpose for trafficking, accounting for 59 per cent.

Ambassador Alena Kupchyna of Belarus, who chairede the 28th session of the Crime Commission and moderated the event, stated that tackling the global challenge of human trafficking is at the heart of the commission’s work.

She said: “Practically, every nation is affected by this crime, whether as a country of origin, transit or destination of victims.

“Therefore, I take this opportunity to highlight the crucial role of international cooperation and partnerships to address this crime effectively. I call the member states to continue working together and maintaining the topic of trafficking in persons in the commission busy agenda.”