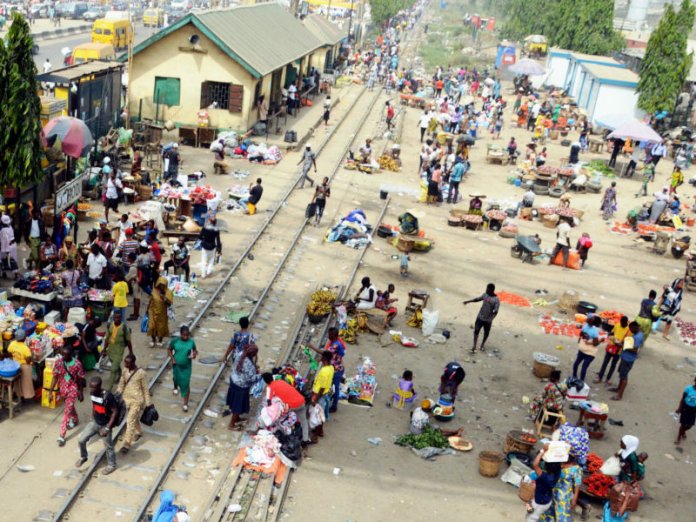 The Lagos State Task Force Agency, on Sunday warned traders and other persons doing businesses on rail lines in the state to leave or be ready for arrest and prosecution.

The Chairman of the Agency, CSP Olayinka Egbeyemi gave the warning through the Head of Public Affairs, Mr Adebayo Taofiq.

He warned that there would be a clampdown on all illegal activities on rail corridors in Lagos.

According to Egbeyemi, heavy convergence of illegal traders selling and buying goods around rail lines was suicidal and an eye-sore in different parts of the state. Areas notorious for rail line trading include Mushin, Ikeja-Along, Yaba, Oyingbo and Agege.

Egbeyemi said that the Lagos State Environmental Sanitation Law prohibits anyone to either hawk or buy/sell goods on rail lines, including all road setbacks and walkways across the State.

“Strategically this unusual and very risky trading practice has led to the death of some people, especially those who are not quick to depart the scene for an oncoming train.

“The primary responsibility of any responsible and responsive government is to protect lives and property of the people. Anyone caught will be severely dealt with in accordance with the law,” he warned.

Egbeyemi also warned officials of both local governments and market women to desist from collecting fees from the illegal traders on rail lines in any part of the state.

Meanwhile, the Commissioner of Police in Lagos State, CP Imohimin Edgal, had directed the task force to raid all black spots known for hideout of miscreants and hoodlums.

Egbeyemi said that the agency arrested 23 notorious miscreants during an over-night raid around Shitta area of Surulere and confiscated bags of substances suspected to be Indian hemp.

He said they also recovered out-lawed illicit drugs such as ‘Novalyn with Codeine cough syrup’’.

The chairman also said that eight members of the notorious ‘Awawa Boys’ were arrested during an enforcement operation carried out around Capitol, Isale-Oja and Agege areas of the state.

Egbeyemi was unhappy over teenagers’ involvement in gangsterism and other violent crimes, saying that the agency would continue to raid all other areas known to be inhabited by undesirable elements.

He said those arrested would be charged to court soon. (NAN)