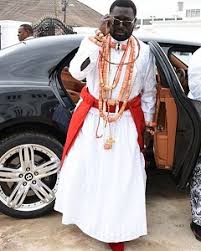 If springing a surprise is an art, it can be taken for granted that wealthy businessman, Ayiri Emami, has a compelling mastery of it.  On several occasions, he has done this, to the chagrin of his critics. He is a man of means and power. He loves luxury and is living in absolute comfort. Strangely, he is fond of showing this side of him mostly when there is a widespread rumour about his financial status.

Last Wednesday, December 26, the Ologbotshere of Warri Kingdom surprised his wife, Empress, on the occasion of the 9th anniversary of their wedding. In celebration of the memorable day, the business tycoon purchased a brand new Rolls Royce for his wife. His wedding to Empress in December 26, 2009 was a grand one, and it is still considered as one of the best in Delta State. Emami is the CEO of A & E Petrol and A & E Group of companies with interests in oil, construction, logistics, 911 Hotels & Resorts, and 911 Entertainment.

He is also the former chairman of Delta Waterways Security Committee and Board Chairman of NigerCat, a construction company under Chief James Onanefe Ibori administration in Delta State.