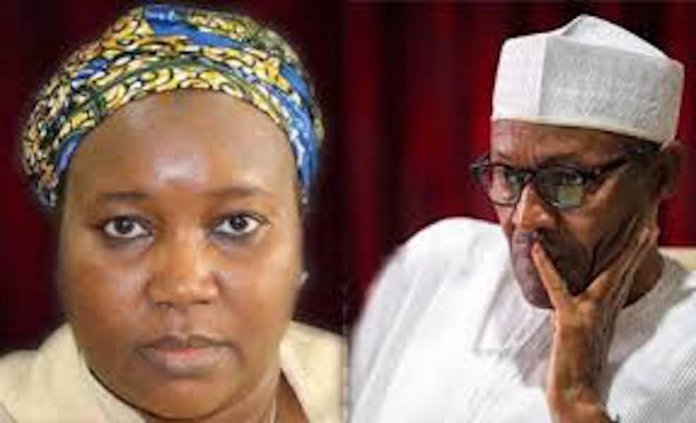 by Omololu Ogunmade in Abuja
The presidency Friday in Abuja dismissed accusations that Mrs. Amina Zakari is the niece of President Muhammadu Buhari, saying Zakari shared no blood relationship with the president.
Consequently, it accused the Peoples Democratic Party (PDP) of launching baseless attacks on the INEC commissioner.
Zakari, a Commissioner of the Independent National Electoral Commission (INEC), came under attacks from the PDP on Thursday following her appointment by INEC as head, presidential election collation centre.
The PDP which described Zakari as Buhari’s niece, said the appointment of the president’s relation to preside over the collation of votes from presidential election was an apparent ploy to rig the 2019 presidential election in Buhari’s favour.
But in a swift reaction Friday, Senior Special Assistant to the President on Media and Publicity, Malam Garba Shehu, who described the allegation as a lie, argued that Zakari was not Buhari’s blood relation but only married to a member of Buhari’s extended family.
According to Shehu, PDP’s accusation is misplaced, pointing out that Zakari was not appointed by Buhari but rather by the former government of PDP.
He said her appointment, like the appointments of her fellow commissioners, was only renewed by this government, insisting that PDP lacked the moral right to question her integrity having done her job well.
The statement read, “In another mendacious press release, the Peoples Democratic Party (PDP) has continued their baseless accusations regarding Hajiya Amina Zakari, a commissioner in the Independent National Electoral Commission (INEC) accusing her of partiality and casting doubts about her integrity as an electoral commissioner.
“In their desperation, they forget that it was the PDP government that appointed her in the first place and they keep lying, as they have been caught doing on so many issues, by imputing a blood relationship between her and President Muhammadu Buhari.
“President Buhari and Commissioner Amina Zakari don’t share a family relationship. An inter-marriage occurred in their extended families, so the imputation of blood relationship between the President and the electoral commissioner is a simple lie.

“What is even more curious about all the fuss coming from the PDP is that they, as a ruling party picked Mrs Zakari, judging her by her own merit and made her an electoral commissioner.

“She served so well with distinction as can be verified from the records that President Buhari approved the recommendation that she be reappointed, as he did other PDP nominees for second-term of four years.

“PDP, therefore, has no moral right to keep harassing this hardworking mother unless they have a hidden agenda.

“By this statement, the PDP is guilty of scoring an own goal and two, of harassing an innocent citizen on the basis of a lie, pure and simple.”